The other day I read on cyclingnews that 21-year old Taylor Phinney is targeting selection for the time trial at the London Olympics.

The former world U23 TT champion and individual pursuit world champion hopes to qualify for the one men’s spot in the US road team. 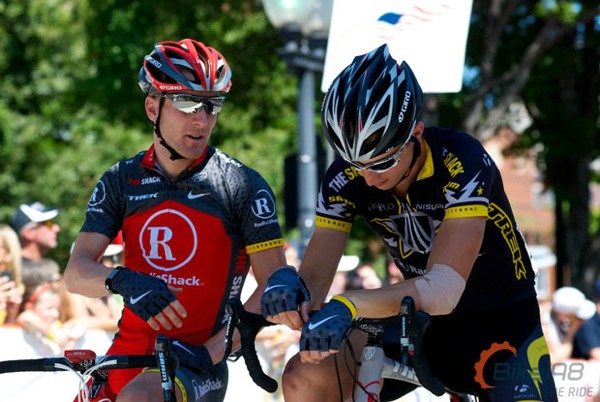 The article made reference to a few blokes who are his competition, some guys called Leipheimer and Zabriskie who are on the ‘wrong side of 30.’

Man that made me smile: I’ve been on the wrong side of 30 my whole cycling career!

And I suspect nearly every male TT specialist in the world (bar Millar, Martin, Wiggo, Cancellara, and a few other metronomic euros) would give their first born to be as shabby as ol’ Levi or Dave Z on the world stage.

This story followed a thought I’d been ruminating on after reading the surprising retirement announcement of another Trek-Livestrong rider, 19-year old Aussie wunderkind, Dale Parker.

Parker won plenty of gold bullion at the 2010 Commonwealth Games, and transferred his amazing track talent to the road this season in a path that many in Australian cycling circles thought might emulate Bobridge and Meyer. Then, in perfectly fitting Gen-Z style, he updated his Facebook status and told his 2500 friends that he was wrapping up his cycling career. Other than his car getting tangled with a light pole in a drink-driving incident 12 months ago, his first season with the U23 team Trek-Livestrong was exemplary.

But it just goes to show: ‘talent’ is the possession of a multitude of qualities, not least of which is the desire to be great.

Parker has physiological talent in spades, but if the lad wants to move on, no great team opportunity, encouraging governing body, or desperate fan will make him do otherwise.

The tantalising and completely intangible factor of what motivates us is one that remains elusive, much to the chagrin of coaches, selectors, talent scouts, and team owners.

Sure, we know that aerobic capacity decreases with age, but it does so very slowly in elite athletes. For many marathoners, ironman triathletes, and road cyclists, they get the same result in V02max tests today in their late 30s as they did in their teens. (It’s just that you can’t threaten or cajole them into doing the tests. I don’t imagine Voigt or Hincapie get told to submit physiological testing data anymore).

Which proves that even more valuable than numbers is a rider’s experience, frame of reference, and ‘suffer memory,’ especially in an event where pacing, confidence, and individual performance are concerned.

When I looked at the podium [results] of the elite TT at road world championships since the event was included (1994)  it held no surprises for me: TT medallists are older than road racers.

Frequent podium finishers Zabirova, Thurig, Kupfernagel, Armstrong, and Arndt are also proving that form is not diminishing with age.

The two notable exceptions to the women’s over-30 average in recent years are Pooley (gold last year at 28 years old, bronze in 2011) and the 26-year-old Villumsen, a veritable podium baby of the past three years!

In the men’s results, we see it’s a bit different, with an average around 26 years of age: Ullrich, Rogers, Boardman, Cancellara, and Martin all won in their mid 20s.

Plenty of 30-something gents have nabbed the podium too, with Tuft scoring silver in Varese (and that was with a wheel change on the final climb!) at the old age of 31.

It’s important to remember, however, that men have an older riding age than women, often starting their careers in primary school (or in the womb if they’re Belgian).

So, Spartacus had probably taken a kajillion pedal strokes, all at 50kph by the time he won the first of his four world titles.

For other individual endurance events, the age averages are even higher.

The Hawaii Ironman World Championships have been won by athletes over 30 in nearly all of its 34 editions (since 1978), with the women in particular showing their strength in their mid-30s: 8-time winner Newby-Fraser, Badmann and Wellington.

We do a lot of talent identification in this country [Australia -Ed.].

We spend time, money, and resources on looking at athletes with the best O2-carrying capactiy, anthropomorphic characteristics, muscle fibres, and overall ‘potential’ – and these athletes are young.

Some of the talent transfer programs find athletes who have excelled at other sports in the hope that their capabilities may translate across to a new event.

I was part of a ‘search for big engines’ program funded by the Australian Sports Commission in 2006/7, but after three days of testing at the Australian Institute of Sport, was by no means the best rider, the youngest, or the ‘gal most likely.’

I am also the only rider of that group who went on to win a National title, race in a pro team, or be forced to wear bear logos on her every limb.

So many factors contribute to one’s ability to perform, and a familiar trap can be the misconception that another rider has it easier than you do.

I admit, I frequently suffer from rider envy:  I wish I’d started riding before I was 33; wish I was Marianne Vos (just for the day she wins Worlds, not the day she was 2nd in the RR for the 5th year in a row); wish I could sprint (and climb and TT) like Ina Teutenberg; wish I had the endless support and positive feedback that the extraordinary Anna Meares ‘must’ experience every single training day of her life….

But hey, surely I’ve got some things they might want very once in a while.

Ol’ Man Levi will be 39 in time for the London Olympics.

No offence to Phinney, but I’m rooting for the ‘Wrong Side of 30’ guy to get the spot.

Author Bridie O’Donnell is a professional cyclist from Australia who races for Top Girls-Fassa Bortolo. She started her sports career as a triathlete and a rower, went to medical school, became a doctor, and transitioned to a life in the peloton after winning a national Time Trial championship in 2008. She lends a rich and valuable voice to cycling commentary and we are grateful to have her writing for us. You can follow her on twitter, where her handle is @BridieOD, and visit her homepage at www.bridie.com.au.