A sizable flash mob, rallied by the tweet of a Laramie, Wyoming, man buried one of the 15 homes of sometime-Tour-de-France winner Lance Armstrong in millions of Livestrong yellow bands. 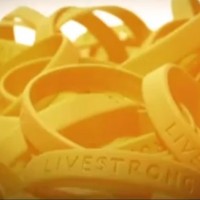 A portion of the Livestrong bands marked "return to sender."

The man, who only wished to be identified as “Chuck,” took to Twitter after Armstrong’s latest failed attempt to hold on to his waning fame via a celebrity Twitter run. The hapless ploy garnered but a few clueless part-time fans to partake in a jog around Central Park with the soon-to-be-indicted Armstrong. Unfortunately, the event put one Armstrong fan in the hospital after he was mugged in a sketchy part of Central Park when his yellow band failed to deploy its protective shield.

The tweet was a rallying cry to those who felt they had been duped by Armstrong, and participants were urged to “descend upon Lance’s Michele-Ferrari-funded Aspen home like a cloud of angry locusts and leave a big pile of yellow plastic shit.”

“Chuck” didn’t realize that his tweet had struck a chord with hundreds of thousands of disgruntled fans at just the right time. When he showed up at the Armstrong compound, “Chuck” was greeted by supporters from as far away as California. One former Armstrong disciple, who referred to himself as “Anderson,” managed to rent a bulldozer to ensure the millions of yellow bands were piled firmly against the front door.

The stack of yellow bands “returned” to Armstrong measured 25 feet high by 100 feet wide, and impressive at it was, represented only half a percent of the bands sold worldwide over a ten-year period. The demonstration took on a decidedly protest-like tone when in a symbolic gesture, the Foo Fighters flew in to perform a powerful rendition of their hit song, “Hero,” with the lyrics adjusted to say: “Armstrong’s not my Hero. Watch him as he runs. Armstrong’s not my Hero – Novitsky’s got him done.”

“I thought I was alone in my realization that the facts spoke louder than the ridiculous Livestrong half-truths. I mean, how much money have they actually donated to cancer charities? Barely any. They’re like that cheerleader that cheers, and cheers, and cheers, but never delivers on any of the promises after the game is over,” lamented a forlorn Anderson.

Armstrong declined direct comments for this report, but did note that his record for bracelet sales should speak for itself.