I really have to talk to you about people on electric bikes. They keep me pretty busy. Why don’t we give those bikes a special colour? Something bright, like canary yellow. Why don’t we put one of those children’s flags on these bikes, not orange, but lime green? We could also oblige the people riding these bikes to wear bubblegum pink helmets – which is actually not a bad idea considering the speed of those stupid bikes. The thing is: I want to be able to see, at just one glance, if it’s an e-bike in front of me or not. Because damn, those things are so bad for my morale. 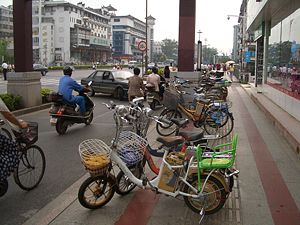 Last week I was pedaling along the main road from Kampen to Zwolle. The wind was torturing me. I rode 25kph, barely. In the corner of my eye I saw a woman at the bike path at the other side of the road, who was, just like me, struggling in the strong wind. At least, that’s what I thought. The air was grey, the fields were empty. The reed alongside the ditches was almost blown horizontal to the wet soil. Birds scudded along the heavy rainclouds, the wind snatched the last leaves from the trees and almost blew me away.

My eyes wandered along the main road, and over to the bike path at the other side. Huh? Was that woman still riding at the same place as moments ago, exactly alongside me? Apparently I didn’t watch correctly. I shrugged and plowed on. My speed decreased to 24. The wind seemed to become even stronger. I watched my computer and after that I gazed to the right again. What?! That woman was still there! What the heck? I was riding slow indeed, but how was it possible that this sixty-year-old in an outdoor jacket, brightly-coloured glasses, and a practical hairdo was pedaling so effortlessly alongside of me?

At that very moment I realised why this was possible. My eyes shot to the rear wheel. I see. Electric bike. With a fierce look aimed in her direction, I started to pedal even harder. I know it’s pathetic, but I really didn’t want to be outpaced by a sixty-something, not even by one on an e-bike. That’s still humiliating. Slowly, very slowly, I saw the woman disappear from the corner of my eye. In the village of ‘s-Heerenbroek, where the houses protected me from the wind, I was finally able to speed up a little bit more. I sighed in relief when I finally dropped her.

A similar incident last summer was even more traumatic. I was training in Zuid-Limburg, in the Dutch hills, doing efforts on a climb. Efforts mean riding up a hill as fast as possible. Again. And again and again. When I did the effort for the fifth time, gasping for oxygen and with legs about to explode, I suddenly saw an aged couple two corners above me. They were pedaling up as well. 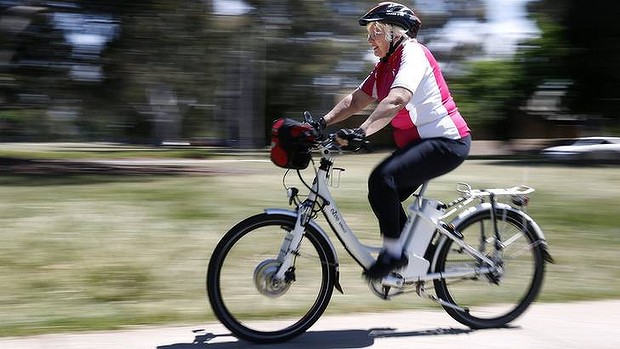 I should have realised immediately that only Super Granny would be capable of riding up a climb like that. For ordinary-aged people it was far too hard. But doing efforts blurs ones vision. I could just notice that this aged couple’s pace was pretty high. Actually, they seemed to be flying up. I was giving it all and I hardly came any closer. WTF?, I thought. WTF, OMG, BBQ?!?! I squeezed out every bit of energy I had left in my body and found myself back in the slipstream of the couple. And there I saw what I should have realised minutes before: electric bikes.

For these reasons, I am pleading for regulations controlling the appearance of electric bikers. Pretty please? That way I can see from a distance that I don’t have to let myself be demoralized – because, after all, they’re just fake cyclists I’m up against.