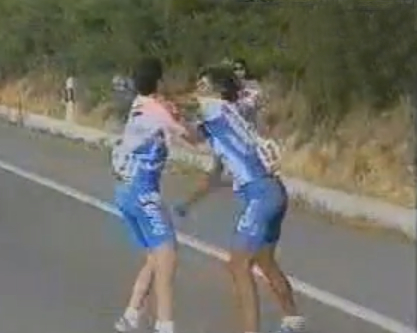 It’s not my fault you’re not in the break

Being back in the fold of being a ‘bike racer’ again this year and being the unanimously untalented rider that I am means I’ve dabbled across a number of disciplines. One thing that disappointed me, apart from avoiding winning at every opportunity was the unnecessary attitude a lot of road riders seem to pack in their kit bag…

I’ve ridden track all summer, the local league and the National Masters Championships, everyone races hard, and I mean HARD (18min 15km scratch race at Nationals!) But everyone is laid back, chatty, relaxed, and helpful – sharing rollers, helping my trying to get 160psi in my tubs, etc.

I’ve just started my ‘cross season, and the first race was just like a big ‘boys club’ hangout, chatting, joking and laughing, but the racing was just as hard as on the track. I lost by five minutes so it must have been really really fast…

So after a year back racing, the track season is about to end and the cross season about to get into full swing and I am left wanting more from both. Sadly road racing has left me wondering why I entered any.

I waiting until mid-summer to start racing, so I was fit enough to get round, then entered two 40/50 mile road races and two open crits. In the first crit, the last corner was carnage and there were riders spread across the pavement after one rider decided that dive bombing up the inside on the last corner would get him the win ‘at all costs’ to other. In one of the road races we got the commissaires briefing on the start line, and were given the strict instruction not to litter the roads and villages with gel wrappers etc., put them in your pocket (isn’t this just common sense anyway?!), and also there was a car parked right on a corner that they were trying to move but we had to race around and be careful of. This was a fifty-mile race, and I kid you not, two miles from the start line (and still in the neutralised zone) I watched a rider pull out a gel, gulp it down, then drop the packet on the road in the middle of the village.

I’m proud to say a couple of my local chain gang guys got in the break and got 2nd and 6th so it worked out nicely, while I got 3rd or 4th in the bunch sprint. After the race I watched from the changing rooms as once of the other riders put his bike in the ‘dangerously parked car’ and drove off… no honestly I am not making this up!

In my final crit of the season, and we’ll see if I ride any next year, I sat on the back of the bunch all race. I’d had food poisoning the night before but felt better so started, I just had no power, so I jumped from wheel to wheel as the bunch split and whittled down to six men. In the mean time at the front there was a break of three and another group of three riders chasing them. Sadly the second half of the race was spent listening to a rider shouting at the group to ‘get through’ or ‘go harder’ and other such motivational quotes.

After a while I decided to offer some assistance, in the form of “Shut up, for God’s sake,” which wasn’t too well received, so I decided to venture forward a few places in the bunch and offer my overview of the situation, which went as follows: “Hey ‘mate’, don’t try and blame us for you not being in the break. The only reason you’re not there is you, try pressing the pedals harder next time. Plus, no one else in the bunch is whinging about being here, I’m actually quite happy to be here the way I feel today.” This message seemed to get through and the guy decided to finish the race quietly and save his frustrations for his next race.

So the point of this ramble is that as bike riders we all have a nation-wide group of friends that we meet every weekend and race against all over the country, and if cross and track riders can smash each other to bits between the gun and flag and be friendly off it, why can’t road riders???

Sure everyone wants to be Chris Froome or Philip GIlbert, but to be them, but need some results like theirs, not just an ego and an attitude. I guess the old adage is still true – let your legs do the talking, others can manage it easily enough.