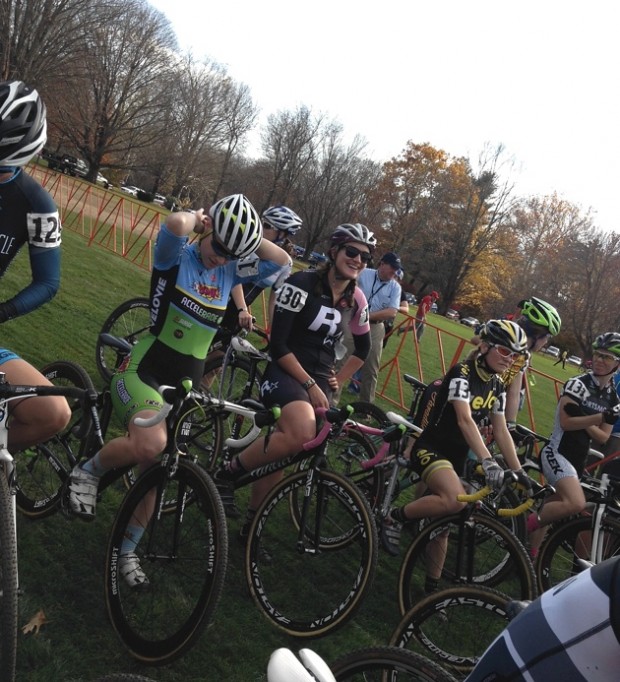 LADIES, I checked the numbers and they say you should upgrade to Slightly More Awesome

I’m a pretty mediocre bike racer, but this weekend, my name made cycling news. Not, like, a headline, but if you click on the results for this weekend’s NEPCX elite women’s race at Cycle-Smart International in Northampton, there I am on the same page as Crystal Anthony and Laura Van Gilder. I might send it to my grandma.

I’m a cat 3. There are easily 30-50 women racing regularly in the 3/4 fields of the northeast who are decisively better at cyclocross than me. I think they – all of them! you! – should be racing in the elite field at UCI races, too. Here’s why:

First, it’s easy. Somewhere between general and specialized knowledge of cycling regulations is the fact that what makes you “elite” is forking over the cash for an international license. The $90 sounds like a lot, but compared to the bikes and the kits and the travel and the entry fees over the ‘cross season, what’s another $90? You also have to learn how to pin numbers on your arms, which is no small task, but I have faith in the fact that you can find friends to do it for you.

Second, I was, in fact, good enough to do it: Saturday I had mechanical problems and had to run about a kilometer with my bike to get to the pit (n.b. the horrific experience of running/hobbling with your bike for an extended distance while trying not to look like a complete idiot is when you learn who your friends are), so I was pulled after two laps.

But Sunday, I finished on the lead lap, well within the UCI 80% rule – and several people finished behind me. Perhaps I didn’t do well comparatively (I got none of that cash money promised to the top 25), but I beat a few people who I always assumed were better than me because they had been stepping up to the elite start line long before I decided to.

If I can do it, so can everyone who has kicked my butt so far this year.

Third, and perhaps more importantly, it makes a statement. Something really awesome is happening in New England lately: women are showing up. Gloucester had almost 100 women in the 3/4 race on the first day. Providence was pushing 135 on both days. CSI had about 75-80 each day – almost exactly the same number of women that registered for Cross Crusade in Portland, except the latter had twice as many men. This is GREAT. It makes me feel all warm and fuzzy inside.

But. But but but. When you take a step back and look at the bigger picture, its the elite races that get all of the attention. Those results go in the magazines, get posted on websites, and are more likely to live on into posterity. Those are the ones that the promoters put the most time, money, and effort into. Those are the ones that often pay equally.

Women are starting to carve out a niche for themselves, proving to race promoters and journalists and fans that they deserve the time and attention that they get on the schedule and in the prize money. But registration is still relatively low for the elite races, compared to both the men and the lower category.

What if those of us who are decent enough to pass for elites (and some who are way more than decent – you know who you are) did so? What if the top 25 women from the amateur field in any UCI race this year registered for the elite field? It would be sad for me because I’d get 55th rather than 30th, but overall it would be an excellent, ballsy move. People would notice. It would be Talked About. And it would be incredibly good for women’s cycling.

Or, you know, you could just keep angling for that podium/top 10 in the women’s 3/4 race, and I’ll continue rocking the bicep numbers like a pro.