Finally my hair is long enough to have a ponytail again. A decent ponytail, a ponytail that deserves that name – instead of some hairs pulled together, playing hide and seek in a ponytail holder.

I used to have one of these snappy, short and fashionable hairdos which looked stunning on me, that is, in my own humble opinion. There was just one situation in which it suited me less: underneath a helmet. As a female cyclist it’s already hard to look feminine, and with short hair under a helmet even more so. A ponytail or braid is much more elegant. 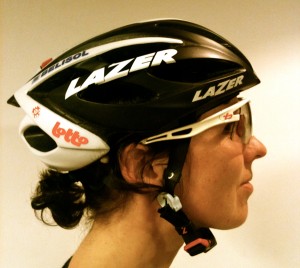 Since I spend loads of my time adorned with a helmet, I decided to grow my hair once again. It was not just vanity that persuaded me to leave my hairdresser without bread for a while. No, the biggest disadvantage of short hair under a helmet is this: a wet mullet on your neck.

The neck becomes sweaty pretty easily, indeed; the heat radiating off your back quickly makes the hair damp. It feels very unpleasant as soon as the wind swirls along. And that happens continuously when you ride a bike. Riding without a ponytail means having a sticky sweaty neck all the time.

That’s why I think the hairdos of some Dutch pros are quite remarkable. 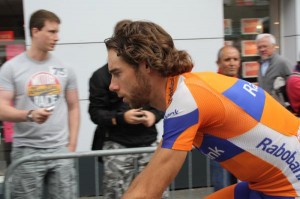 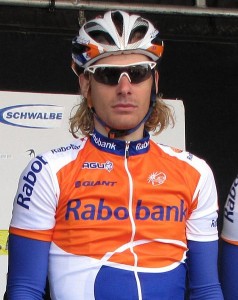 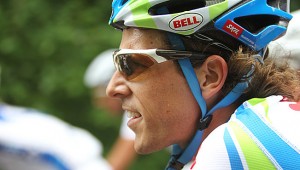 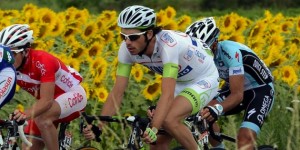 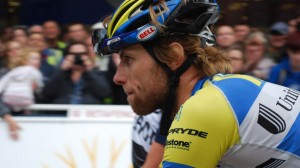 They all have these impressive strands of hair floating from the backside of their helmets. With the smallest of efforts the undulating strands transform into a wet mullet. That must be highly unpleasant!

I agonized about this hairdo over and over again, but notwithstanding that it seems to be a typical Dutch phenomenon – even the average Italian wears his hair shorter –  that’s got nothing to do with the teams the guys are on. They ride pelotonwide. Laziness cannot possibly be the reason, because a hairdo like this is pretty maintenance-intensive. It wouldn’t surprise me if every one of these guys has more hairproducts in their luggage than an average woman.

Vanity is another option, were it not that one crucial aspect of the wet mullet-hairdo is in total contradiction with that. You see: I have a reason for having a fringe. A fringe that also covers my forehead únder the helmet. Aforementioned gentlemen smear their hair backward with big globs of gel to make it stay out of their eyes. Nothing wrong with that at first glance. But I’m very sure these pros know: naked forehead + helmet + blazing sun = very strange stains on the head. Therefore vanity can absolutely not be the reason for this hairdo. Only Italians like Pippo Pozzato are vain enough to touch up strange stains and unwanted tanlines with self tanning creme, I reckon. Sober Dutchies don’t do a thing like that.

So I’m facing a big mystery. Maybe this should be this season’s main goal: find out why these men wear their hair like that. The only reason left I can think of is that they just don’t know how easy a wet mullet can be avoided. They’re not aware of the fact a ponytail can give so much relief. So that’s why I’ll bring a bag of ponytail holders when I go on investigation. For if I can lighten the heavy load of my cycling brothers just a tiny bit, I’ll do that with love, of course.