In an emergency session of the UCI management committee, only a week removed from their Valkenburg announcement that cycling failed to exist between 1998 and 2009, an emboldened Verbruggen and McQuaid today pushed through a declaration indicating that the nation of Japan no longer existed in the eyes of the UCI. 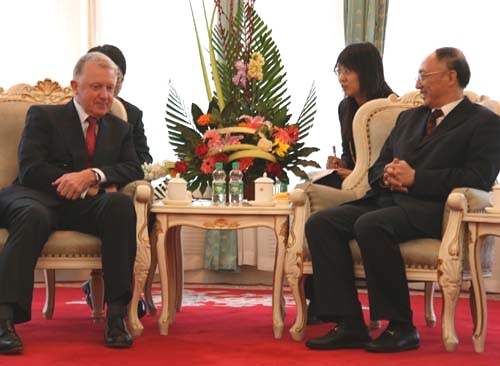 “We must protect our tenuous relationship with China. I have staked my entire career on my business ventures and relationships in China. In order to appease those relationships, we had no choice but to pass a UCI motion revoking the existence of Japan, until such time as China says it’s okay for them to exist again,” declared Verbruggen at a makeshift press conference in Binondo, a traditional stopping point in Manila on the way to Beijing for the UCI’s honorary president.

Pat McQuaid, also in attendance at the press conference, echoed the sentiment.

“We must protect our tenuous relationship with China. I have staked my entire career on Hein’s business ventures and relationships in China. In order to appease those relationships, we had no choice but to pass a UCI motion revoking the existence of Japan, until such time China says it’s okay for them to exist again,” stated the UCI presidential parrot.

Caught in the mess of the declaration were the thousands of Japanese companies who are involved in the sport – from marketing, manufacturing, media, public relations, sales, and consulting.

“So in the eyes of the UCI, Japan no longer exists. Does this mean we get to yank our massive sponsorship dollars from the UCI, since we are a major sponsor of the governing body itself, with our logo plastered all over their website? The fact they asked our partner, 1t4i, to stay away from the race is an embarrassment to all in the sport,” stated a currently invisible, unknown, and anonymous Shimano spokesperson.

“Good luck with us being involved next year with the World Championships,” added the same invisible, unknown, and anonymous Shimano spokesperson.

Pundits everywhere were up in arms over the action.

“Is it possible to place the heads of the UCI further up the arse of Chinese politicos? Is it? Seriously?” stated one pundit who may or may not have been Neil Browne of Roadcycling.com as he was only partially invisible due to his t-shirt bearing the Specialized logo. [Editor’s note: Specialized manufactures some of their products in Japan.]

However there was an upside to the declaration, as noted by Trek’s Gary Fisher.

“Hey the good news is we can go about racing without being on the UCI’s radar. I mean, maybe we can just go back to business as usual since the Japanese content of race sponsorship, race organization involvement,  and racing products is so high the UCI won’t be able to see any of our events next year. No more UCI is pretty much a good thing for everyone,” stated Fisher.

Garmin-_____’s CEO Jonathan Vaughters was unavailable for comment as he uses a _____ mobile phone, which under the current UCI regime has been rendered non-existent due to the emergency motion passed.