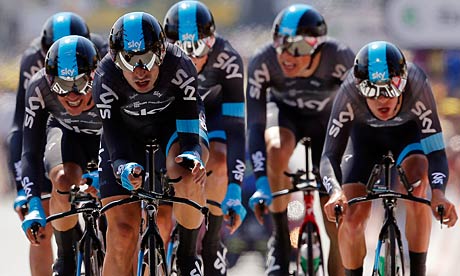 JaBrailsford the Hutt has kidnapped Froome Skyrider’s betrothed, Princess Michelle, in order to “encourage” him to win the PodRace at Neece, and pay back the money he owes him.  To compound Skyrider’s problems, the droid Gee3PO urgently needs expensive spare parts to repair damage he sustained in the Emperor’s attack.

Technically still illegal, PodRacing is massively popular throughout the galaxy and draws large crowds, and even larger bets.  Normally raced individually, the Neece PodRace is unusual for being a team event, where the winners have to get five racers over the line in one piece.  The famed twin-headed race commentator SherGett keeps the crowds entertained by misidentifying the racers and pointing out repeatedly which are former Mountain Bikers.

The droids from OPQS, able to process information in mere microseconds, take an early lead and are soon looking unbeatable.  Skyrider and his team huddle to discuss tactics before they set out.  Knowing that JaBrailsford stands to lose a fortune should he not win, Skyrider confides in his team that his intention is not actually to win the race, but to come in close to the winners time so as not to arouse suspicion.  He plans to infiltrate JaBrailsford’s compound, rescue Princess Michelle and wreak his revenge.

Never predictable, the PodRace takes an unexpected turn when the wildly popular team from Orica Major somewhat surprisingly overtake the OPQS droids.  The team consists of fierce and fearless warriors who are incredible natural pilots.  They carried good odds going in to the event, and the Hutt are furious that they are losing vast amounts of money to those who had placed bets of them.  As the Hutt try to leave with their money intact, a riot begins in the crowd.  Unaware of the drama unfolding around them, the jubilant Oricans head straight out to Chalmun’s Cantina for some space beers to celebrate their victory.