I spent a couple of days in Limburg, the south of the Netherlands, to train. The arrows for the Amstel Gold Race tourist ride were already out there, so I started following them. Nice and easy.

Just before Noorbeek I met Sue. Sue the bike courier, who had plans to start racing. Two years ago she showed me one of the most beautiful loops through the Belgian Voerstreek. We talked about what it’s like to be a cyclist. She appeared to be strong and very skilled on the bike, it would not be hard for her to ride in the women’s peloton.

We both squeezed our brakes to have a chat. Sue didn’t start racing in the end. She’s on the bike five days a week for her job. She rides a singlespeed, or a normal race bike, like today. Backpack, cool kit. A cyclist, but not really. 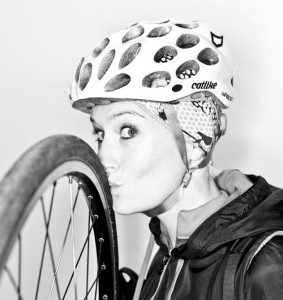 She started telling me about last winter. On the freezing cold snowy days, when the roads were slippery like hell and the icy wind from the east caught your breath, she mounted her bike. On those days she was even more busy, because Sue mainly delivers medication to older people. And they don’t like to go out in these circumstances. She rode from one elderly home to the other, freezing on her bike, gliding up and down the slippery slopes of the hills in Limburg. How often must Sue have been crying of pain in the shower because of her frozen hands and feet, I thought.

How cold must she have been, while I was doing my training in Spain or at least had the choice to train on the roller if it was too cold or too wet outside. She had no choice but to go outside, every single day. I never realised that before. “The last couple of weeks I have thought a dozen times that spring finally arrived, and then it didn’t happen,” Sue sighed.

This weekend spring finally arrives. I’m for no one more happy than for Sue.