2012 was the year of hi-viz, my bike, my bar tape, my bottle cages, my shades and, for most of the 21st of December, my face. That’s right, when the Mayans told us the world was going to end (or the day we looked at a Mayan calendar and couldn’t work out to turn the page) my little world nearly did. 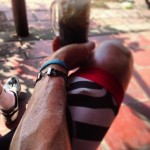 The climate of the Mekong delta is not kind to a pasty Englishman; since getting off my bike and returning to our hotel room where the air conditioning wasn’t working, I hadn’t stopped sweating. Until I started shivering about midnight. In the meantime I had decided to skip dinner but forced down a steamed bun and a beer (optimal nutritional choices). That night I was sick seven times, I slept in a shower with the water keeping me cold. My teammates were caught between concern and exhaustion.

Less than 24 hours later I was racing around Saigon’s district 7, a crit at over 51kph fuelled entirely by “golden cow” energy beverages, 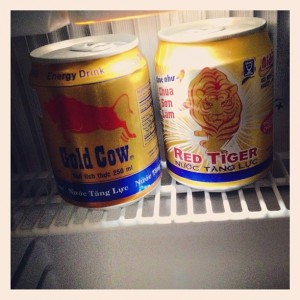 which isn’t much fun; neither is being about 5cm taller than the next tallest bloke in the peloton and smashing your boys bits into the saddle so hard that you break the shell. None of these is an optimal way to start your Saturday. But when there are hundreds of Vietnamese school kids going absolutely bonkers by the barriers, a flotilla of motorcycles which would make the Hell’s Angels envious, 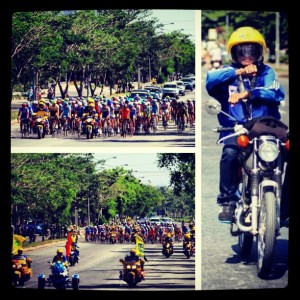 and a peloton that made up for having the same average height as the inhabitants of the Shire by one of the most friendly, diverse, and enthusiatic crowds I have ever raced in, you’re still having fun. Or at least I was; my intestines were still not in their happy place.

I have been lucky enough to race on four continents now, and the experience we had in Vietnam was one of few in which the whole environment – from the food, to the race, to the roads, to the climate, to the hotel, to the weird tapioca beverage they served at dinner – contributed to the overall stranger in a strange land feeling. But, as the team name suggests, Team Traveller’s finest embraced the novelty and dove in head first. Not only did we get in some fun racing, we tried our best to really find our way into the real Vietnam, speak to the people, eat the food, and of course, ride the roads.

Saigon, if you haven’t been, is essentially a city of 8.5 million people, all simultaneously participating in a Cat 6 criterium on motorbikes 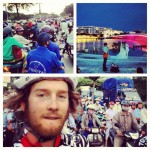 with lawnmower engines. On arriving (and we very nearly didn’t arrive, thanks to some visa shenanigans) we hadn’t slept for 48 hours (aside from a snatched hour in Taipei’s transit lounge) and we could barely keep our eyes open. But once we got in the taxi we could barely keep our heads inside the minibus (this wasn’t helped by our driver’s insistence on pumping up the Backstreet Boys, which I had mistakenly shown recognition of). Everywhere mopeds flowed around cars, other mopeds, street food stalls, enormous potholes, and the occasional traffic commisar in pristine white gloves trying to control the herd. 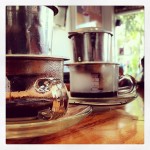 we built and rode our bikes, whereupon we inspected the supermarket and returned loaded down with with things we hadn’t ever eaten before. In many cases this proved enlightening, and in certain cases (hello, squid jerky) it proved deeply worrying. The next day, Jordan and I – joined by our teammate Martin, a fellow Brit – made a trip to the market in the middle of town. After Martin had finished mocking me for looking like a “gap year tit” we stocked up on tailored suits for $60, neon underwear (it’s important for the team to be matchy-matchy, right?) and photographs of Vietnamese people marvelling at Christmas trees in tropical temperatures. 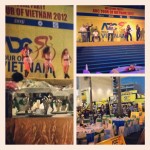 The race presentation came and went, and with it one of the more interesting race buffets I have ever had the pleasure of(over)eating. I never knew I liked congee, or crunchy pork “fiber,” I’ve never bolused for what I thought were noodles only to find that they were actually tiny eels, or had a drink which was supposed to have mucilaginous globs floating around in it, or seen a steam table full of chicken heads. I’m sure if I was a serious bike racer I’d have been on the rice and grilled chicken. Good thing i’m a gap year tit then. 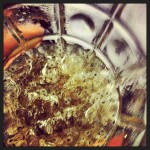 The first day of the race took us, via some large potholes, an enormously beautiful suspension bridge, every small child in the whole of Southern Vietnam, and several fairly spectacular faceplants to Can Tho. Can Tho is the capital of the Mekong Delta province, it’s a bustling market town with none of Saigon’s tourist industry. Lying on the ground after the stage (enjoying what would become a daily ritual of ice and vomiting), little children touched my white chest and brown arms, laughed at my beard and scrambled for my bottles. At dinner the Filipinos (Team 7-11, no less) laughed at my unfamiliarity with the food, the Malaysians showed me how to sequester bananas away for later, and the Vietnamese slurped their pho while I spilled mine.

I won’t bore you with race details – I rode my bike and didn’t win (you’re shocked, aren’t you). Sometimes I tried to attack, it didn’t work. Efforts sucked the life out of me in the heat. The air felt thick in my lungs and left a black coat on my legs. I drank more than I ever had before, and I rushed to a barber to have the beard removed. I looked up “shave” and managed to say “I would like a shave, manicure, face pack, and please vacuum my skin while you’re at it.” Afterwards I felt cooler, cleaner and I looked a lot more like a bike racer. 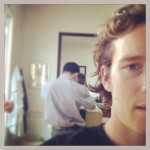 The  race could not have been better run. I have been in many races in the US and Europe which could learn an awful lot from the marshalling (not least in terms of dance moves), hotel organization, catering, and race vehicles we received. Yes there were issues with the UCI commissaire, but that’s not the fault of the organiser and it’s a story for another day. Suffice it to say that cycling is succesfully clamping down on the issues which are ruining the sport’s public image and expelling those who are the worst offenders. I want to publically apologize for my refusal to adhere to the WADA sock doping rules and the fact that my team contained more than one nationality, apparently these warrant being not allowed to race, unlike certain other offences.

Our race finished with a criterium in downtown Saigon, and having applied appropriate hosiery we took the start line. I 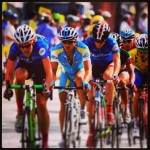 hadn’teaten for three days. Fortunately not eating had spared me the food posioning which had struck everyone else on our team who had troubled the race buffet 12 hours previously. With all but one of us struck down we set about putting on a show. 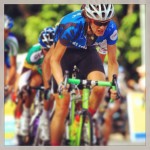 The crit was a points race which saw me fulfilling my calling as a “take me from the back to the front guy” and “attack on the non-sprint lap dude.” By the end of the race our merry band was down to half our original numbers with our only “healthy” rider severely in Mojo (maybe it’s true that what doesn’t kill you makes you stronger?) as Martin and Jordan were regurgitating dinner on the backside of the course as the crowd looked on, baffled. Jean Michel managed to make it back to the hotel before the confined spaces of the elevator provided the perfect location for a botu of projectile vomming, which didn’t endear us to the other 200 people in the race who had to get back to their beds.

After we were finally finished we spoke to the spectators, an old man pinned a communist youth badge, we hugged our mechanic, and handed over a signed kit. 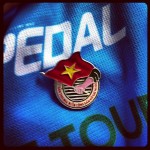 We gave our last remaining PowerBar bottles to the assembled kids and signed autographs for people who clearly had no idea who we were. They shoved TV cameras in my face and I spoke the only words of Vietnamese I had learned – “thank you” – luckily they fit pretty well with how I felt (and I would never say “Now where’s the crapper I need to spew my guts out” on live TV, even if I could do so in the local lingo) . We spent a week on the beach, it was fun, we returned to Saigon, we stayed in a run-down hotel and, on our last night, we 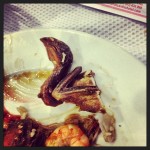 ate street food and it was, as always, delicious, cheap, and, true to form contained something’s head/foot (a chicken this time).

With half the team gone and my roomate safely tucked up in bed, I went for a walk, where I get the impression from the muffled giggles that 190cm long-haired white men don’t frequent the neighbourhood. Crouching my way along the pavement I saw a man of about 40, he beckoned me into his home and, being incapable of fearing anyone who offers me watermelon, I slipped into his smoky, one-roomed home. We ate the watermelon (I will admit the arrival of a machete on the scene gave me the willies), and a Coca Cola bottle filled with rice vodka emerged alongside this man’s father. Soon enough handsignals, his few words of French, a basic knowledge of recent history, and play acting had explained he had served in the Vietnam war, and not on the losing team! For an hour we drank tiny shots and he made the rat-atat tat noise of a machine gun while hugging me every few minutes. And so ended my time in Vietnam, in the hands of the Viet Cong, drinking their vodka and eating their watermelon. Such is the rich tapestry of life and the joy of travel. 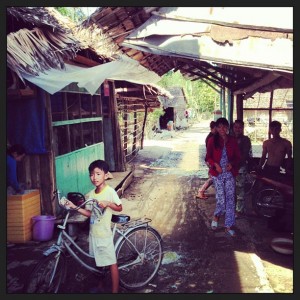