Small stories from the Ronde

There were only double beds left, explained the receptionist in our hotel in Gent to us and she added she felt really sorry for us. But what did we spot, when we came back from our training ride? There was a bed in the hallway. It stood on its side. Just like that. Ready to be rolled to some room. I looked at my teammate, Kim. Shall we, I asked her, can we do that? She shrugged, with a twinkle in her eyes. Why not? Each of us, with a bed of our own, we would have a better sleep, no? And sleep would be pretty important this night. We glanced around. No one to be seen. We opened the door to our room, pushed the bed inside as quick as we could, and in doing so made a nice variant to the ‘Eat the plate of another rider first…’ quote of Hennie Kuiper: “Sleep in the bed of another rider first…” Our apologies to the hotel guest who had to spend the night on the floor.

The photographer of the Belgian magazine HUMO who came to our hotel to take photos of me concluded it was way too cold to go outside, to my great relief. But where would we take the photos now? Could he perhaps see my room? Maybe that would be a nice background? I spluttered something about not very interesting and pretty dull actually, but the photographer was determined. He wanted to see my room. The room which I only did one thing in after I had arrived, just before I received the text message which said I was expected in the lobby. With a growing feeling of embarrassment I showed the photographer to my room. In the meantime I was wondering if I had closed the bathroom door or not. I really didn’t remember. Would he smell it? Or would the smell have gone already? I silently prayed for the latter. I opened the door with my card. The bathroom was open. I sniffed. O shit: poo. But come on. How could I have ever predicted a photographer would want to check out my room?

I’m not such a big meat eater, but when I saw the pile of juicy steaks at dinner I decided to take two of them – knowing eating in the morning before the race is always difficult for me. Steak and pasta is excellent racing fuel. I was thinking this over when I shoveled the two pieces of meat onto my plate, not realising our teamleader was just behind me filling his plate. His eyes got big as saucers when he saw me taking not one, but two steaks. In only a couple of seconds he came up with a theory to explain my greediness: One steak for a good positioning before the Molenberg and the other one for the Oude Kwaremont. Right. One for the Molenberg and one for the Kwaremont: exactly the fuel you need in the Ronde. 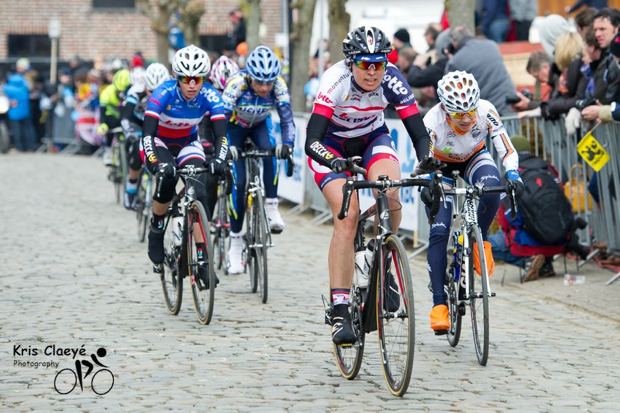 Marijn on the Oude Kwaremont. Looks like the second steak did the trick. (Image by Kris Claeyé)

The race stayed together untill we hit the Oude Kwaremont. We all knew it would happen right here. My legs felt good and I was in the front. With the first twenty riders I rode onto the cobbles. I started to pass riders immediately and decided to pass the lurching American who seemed to get stuck after every single cobble at the left side. Close to the barrier fences, I guessed she wouldn’t swing that way. Wrong guess. At the moment I started to pass her, she swished her bike to the left clumsily and I had nowhere to go anymore. Just before me I saw a policeman – or a steward, I didn’t look really closely – at our side of the fences. In the split second I had I decided to bump into him, hoping he would catch me and prevent me from crashing. I was barely going 10k an hour, so it wouldn’t be a painful encounter for any of us. But the officer only saw me at the ultimate moment. The American girl hit me at the right side, I bumped into the officer and toppled over. There I was, my feet still stuck in the pedals, so I couldn’t get up immediately. The crowd sneered and laughed. The officer helped me back on the bike. I started to chase back and rushed over the cobbles, passed the Kwaremontplein, upwards. At the end of the cobbles I was back with the riders I started the Oude Kwaremont with. But the group of nine riders was gone. A steak for the Kwaremont turned out te be a good idea, but next time I’d rather take a serving of luck.

In the end a lot of riders came back together in our chasing group. The sprint for the 10th place was a chaotic one. I finished 43rd, to my big disappointment.