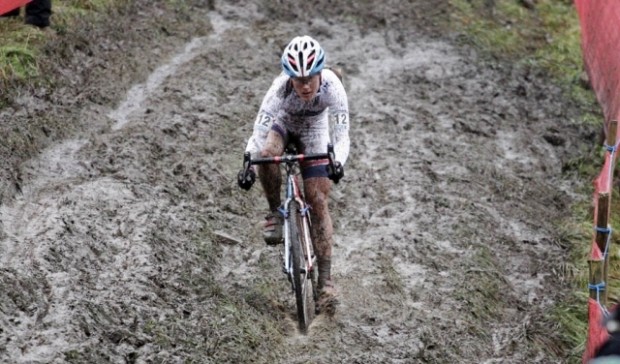 Our good friend Bill over at In the Crosshairs has been killing it with the #SVENNESS series of cyclocross video breakdowns, which he dubbed #CYLISMASVENNESS for us.

In this tradition of video genius, we’re stoked to present #LIKEAVOS, Bill’s homage to perhaps the greatest contemporary bike racer we know, the incomparable Marianne Vos.

I give you the third episode of #LIKEAVOS.

#LIKEAVOS 1.2 from In The Crosshairs on Vimeo.

For #LIKEAVOS Episode 1.2 we visit the fourth round of the UCI Cyclocross World Cup, which took place December 22, 2013, on the slopes of the citadel in Namur, Belgium. The race is punctuated with tough climbs and fast, slippery descents. This is the first time since the opening round in Valkenburg that World Champion Marianne Vos is back. In that race, Vos took a commanding win over US National Champion and current World Cup leader, Katie Compton. Since finishing second to Vos in Valkenburg, Compton went on to win the next two rounds. The long-awaited rematch did not disappoint as these two stars went head-to-head on this demanding Namur course.

We concentrate on the difficult start, the long off-camber section, the ability to stay patient, and a wild battle for fourth place. Compton, Vos, Nikki Harris and Eva Lechner feature.

This episode is brought to you by Skills Drills and Bellyaches: A Cyclocross Primer. Just because the holidays are over, doesn’t mean you can’t buy yourself a present. It’s never too early to start preparing for that 2014-2015 cyclocross campaign or even to pick up some last minute tips heading into your national championship race. The book and more info is available at www.cyclocrossbook.com.

#LIKEAVOS is also sponsored by CrossVegas, which takes place September 10, 2014, in Las Vegas, Nevada. It is America’s Fabulous Cyclocross Event and an amazing opportunity to see many of the stars of SVENNESS and LIKEAVOS in person on US soil. More info at www.crossvegas.com.

Footage for this episode via UCI: http://www.uci.ch/templates/UCI/UCI5/layout.asp?MenuId=MTI1OTg&LangId=1