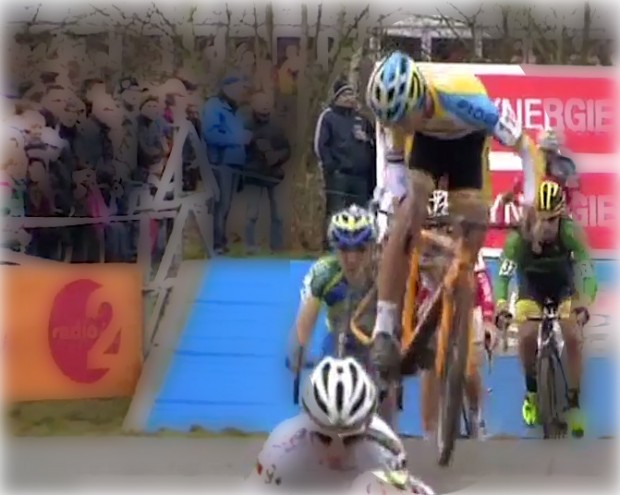 #SVENNESS 2.16 from In The Crosshairs on Vimeo.

In episode 2.16, SVENNESS goes to Leuven, Belgium, for the latest round of the Soudal Classics Cyclocross Series, which took place January 19. The Leuven course features some short tough climbs, and one particularly hairy descent. There is also a fun ramp section and a touch of mud. A handful of different riders take their shots riding off the front but nothing sticks until Tom Meeusen, Kevin Pauwels, and Sven Nys get away with five to go. Meeusen is the aggressor in this race launching attack after attack. Pauwels counters and Sven once again shows incredible patience.

With parts of the Leuven course bordering on single-track, we took the opportunity to review a couple MTB skills that are definitely ones you need for your cyclocross skill set. We also look at ride vs. run opportunities and how the pros handle a little contact between riders.

SVENNESS is presented by Skills Drills and Bellyaches: A Cyclocross Primer, available at www.cyclocrossbook.com and by CrossVegas, which takes place September 10, under the lights. More info at www.crossvegas.com.

As always, if you like the songs on this episode, please visit the artist links below and buy the track or even the album.