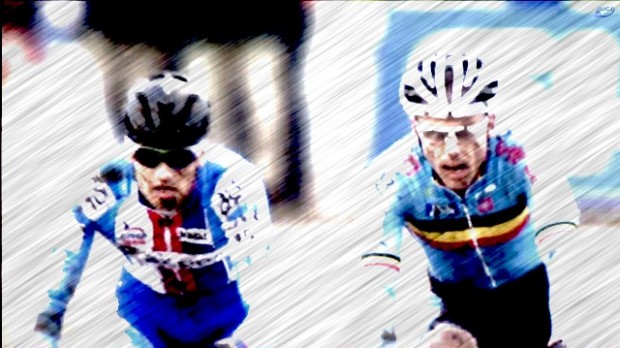 #SVENNESS 2.17 from In The Crosshairs on Vimeo.

In episode 2.17, #SVENNESS goes to Hoogerheide, Netherlands, for the 2014 UCI Cyclocross World Championship. The elite men’s race was a battle of two giants, each with two Men’s World Championship jerseys to their name. Zdeněk Štybar won the rainbow jersey in 2010 and 2011, to go along with two U23 jerseys won in 2005 and 2006. Sven Nys is the reigning World Champion. He first won the title in 2005.

The Hoogerheide course is a tough one made even tougher by the wet conditions. The mud on the track is not necessarily deep but it is slick, which makes every turn an adventure. And speaking of turns, there are several significant rutted off-camber sections that play a part in the outcome of this race. We also look at the “swinging gate technique” of getting around a sharp turn, and the run vs. ride decision and it’s tactical application. But mainly, we just sit back and enjoy a barn burner of a race.

SVENNESS season two is sponsored by Skills Drills and Bellyaches: A Cyclocross Primer, available at www.cyclocrossbook.com.

It is also sponsored by CrossVegas, which will takes place September 10 in Las Vegas, Nevada. Rumor has it that this may be a rematch of Stybar and Nys. Just a rumor, but how cool is that? Either way, come join us at the race. More info at www.crossvegas.com.

Finally, a great way to support this series is to buy a supercool SVENNESS t-shirt at www.SVENNESS.com.

Video footage for this episode via Sporza: http://www.sporza.be/cm/sporza/wielrennen/veldrijden

Is It Your Choice To Say That I Don’t Deserve You?~Souven!rs: https://souvenirsvannes.bandcamp.com/