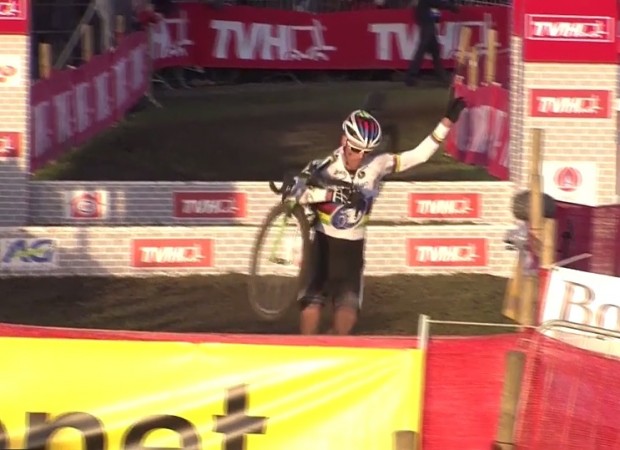 #SVENNESS 2.15 from In The Crosshairs on Vimeo.

For episode 2.15, SVENNESS makes a stop at the Belgian National Cyclocross Championships, which took place at the Gaverbeek Hippodrome in Waregem, West Flanders, Belgium. The race takes place on a flat track with several flyovers and drainage ditches. It is a bit muddy and there is one long stretch of sand that plays an important role in this race.

We focus on the sand, the planks, the attrition of an already small field, and the solidification of a legend. For the Belgian elite race, only racers who have full-time contracts are allowed to compete. That means the field is only 14 deep. The elites without contracts race a minute after the full-time pros start their race.

This episode is presented by Skills Drills and Bellyaches: A Cyclocross Primer, which is available at www.cyclocrossbook.com.

SVENNESS is also presented by CrossVegas. Find out more at www.crossvegas.com.

SVENNESS t-shirts remain on sale at www.SVENNESS.com. Quantities are limited.

Footage for this episode via Sporza: http://www.sporza.be/cm/sporza/wielrennen/veldrijden

If you like the music, please purchase the track. Support the artists who liven up these episodes. Tracks for 2.15 are: