La Pélotone: The women get serious

After repeated calls for someone to do something about the state of women’s cycling, the directors of all women’s professional teams announced today they had teamed up to create of a new women’s cycling association separate from the UCI, the Association of Female Cyclists. Due to a lack of funding, the association will run on daisies and candy, though actual funding could be in the works if the AFC hears back from Tampax. 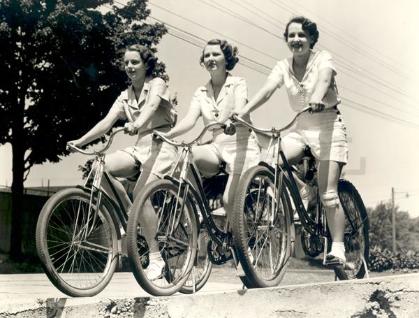 The AFC announced they were in talks to add women’s versions of the major classics, including Milan-San Remo, Paris-Roubaix, and the Tour of Flanders, all to be broadcast on ESPN. A representative for the AFC told Cyclismas that station executives, though they publicly stated altruistic reasons for promoting women in sport, were persuaded that their base audience might tune in once the AFC explained it more slowly: “Five hours. Of women. In spandex.” According to one witness, the reaction in the boardroom included the glazed-over eyes of 11 middle-aged white men and an eye roll from the sole female executive at the meeting.

“It’s not the way we wanted to win this one,” said the AFC spokesperson, “But this is American television we’re talking about — if you don’t go for sex, you’ve got to go for violence. Unfortunately, we couldn’t find a convincing Tonya Harding in the peloton.”

Reached by phone, a top American women who wished to remain anonymous was in tears over the new $20,000 minimum salary, which will be mandated by the association. “It’s been five years since I had a day without ramen,” she said. She expressed hope that more people will tune into women’s racing once more women could afford to dedicate themselves to training full-time. “The speed of the peloton is probably going to increase by 5 mph on average, now that we’re going to be paid enough to eat.”

Asked to comment on the loss of women in the sport, UCI president Pat McQuaid responded, “What women?”

La Pélotone is a Cyclismas column dedicated to Shane Ferro’s daydreams about a world that takes women’s cycling seriously. You can follow her on Twitter @shaneferro.