It all starts and ends with Lance Armstrong

He is everywhere around here. His ghost is haunting the city and the lands surrounding it. Not because of the doping news or because of his oncoming interview with Oprah. It’s not about that at all.

“Look, this is the apartment where he used to live. Three hundred square meters and extremely luxurious!”

“At the airport we still have his signature on the wall. I was there when he signed it. He always travelled with Ryanair.”

“At this bridge they gathered for training rides. The Stone Bridge, they named it. Everyone still calls it that. As soon as he arrived, they departed.”

“This is where he used to have his coffee. Cortado. Without sugar, of course.”

“Sheryl Crow also lived here. Sometimes you could hear her sing, if you listened closely underneath the window of their apartment. The First Cut Is The Deepest, a cover of course, but she was totally hooked on that song when they got involved. It sounded so good here, in this narrow street with the high buildings.”

“In this shop he used to buy his shoes. He bought his socks over there. And he got his laces from the other side of Plaça Catalunya. Across the street he bought his toothbrushes, but he used to import his favorite toothpaste from America.”

“This was his favorite climb.”

Funny enough that’s always different, depending on who you’re talking to. Everyone claims to know which climb his favorite was. It’s all fine by me; all climbs here are gorgeous. They’re all my favorites. Maybe he thought the same way. Wouldn’t surprise me.

Even the signs at the side of the road which tell cars to respect cyclists, signs which I think are brilliant, signs which I’ve seen at no other place in the world except for here and which drivers actually do respect, which makes me feel safe on my bike, appear to be here because of him.

“This is how the politicians thanked him for what he did for the region. We’re thankful to all the cyclists living here, we think we should respect them.”

He lived here for only four years, but it made Girona world famous instantly. Dozens of professional cyclists from all over the world followed him, and in their wake thousands of cycling tourists. He left eight years ago, but he always comes up, in every single conversation I have, with whomever I’m conversing.

That’s why I think of him a lot, when I’m riding up a hill. How much faster would he have done that here? When I enjoy a beautiful scenery. Would he have enjoyed it as much? Or would he just have kept on staring at his bike computer, being the monomaniac he was? When I have a coffee somewhere. Would he have had coffee here too, at this terrace, in this very chair maybe? Do our bums touch each other now, indirectly?

What he has done or not, what he has taken or not, what he’s about to confess or not – the people here don’t seem to care. They just like to mention him. Affectionately. Like he’s still one of them. Like time stood still since he left. Like nothing that happened after, ever happened. 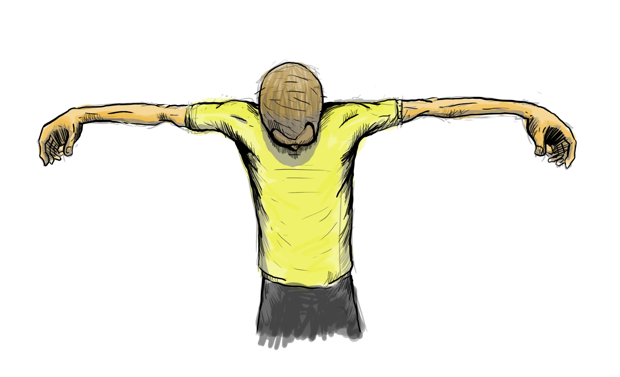