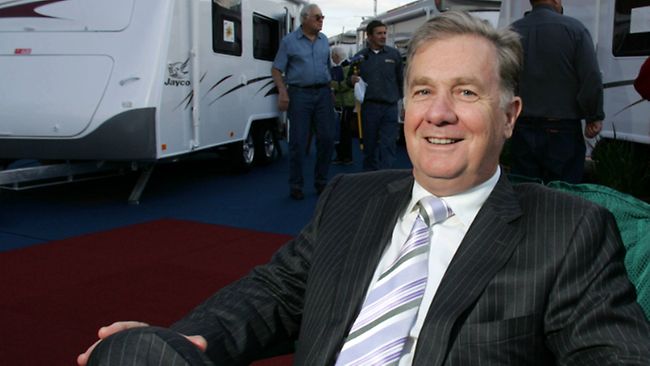 Gerry Ryan: "Not even the offer of a free caravan could make people interested"

The GreenEDGE cycling team will end its association with professional cycling at the end of the season, drawing to an end its seven-month spell in the sport.

The squad has consistently been ranked as the number one team publisher of press releases in the world, but struggled to attract any interest despite the massive amounts of hype generated by the marketing team. Team owner Gerry Ryan today announced that the squad would fold at the end of the month, and encouraged bullshit mongers from its marketing department to find new homes for 2012.

Ryan has continued to publish press releases right up until today, with the latest concerning the shock news that Stuart O’Grady had accidentally nicked his penis with a razor while shaving his legs.

Ryan told the press via yet another press release:

We went public with our marketing blitz at the start of this year. We were frustrated by the indifference of the general public who seemed to not really give a shit about the team. That indifference remains a mystery to me.”

Meanwhile, marketing executives, their assistants, and the assistants to the assistants have already been in negotiations with other squads. Word Wanker-In-Chief, Brad Caprazzi, said he would announce his decision later this week, although it’s expected that he will join new social media giant Facefart as Associate Editor of the Marketing & Touchy-Feely Human Interactions Department.  Meanwhile the social climber, Chad Chandleson, has already been announced as joining the Radioshack team where he will continue to be ignored.

The squad had one of its most successful seasons, with nearly 500 press releases in just a seven-month period, but at the same time Ryan was honest about the uncertainty surrounding the team’s future as he feverishly scrambled around looking to see if anyone cared:

What led to the team’s remarkable success was the team’s remarkable spirit that we had in the organisation. Everyone had thick-rimmed glasses, and there was a rule that everyone employed in our marketing department had to have at least one tattoo.  This month we’ll record our 500th press release,” said Ryan via another press release, “I just can’t understand why with that kind of success no one would give us the time of day.”

Our goal was to bring forth marketing people that could lead the sport forward and although this is a sad press release in some respects, I do feel like we fundamentally changed the sport. No one will be able to launch a cycling team now without releasing at least 50 press releases per day.”

Ryan concluded by saying that he was looking forward to the rest of the month and he hoped that the cycling world would enjoy the last remaining press releases, where details would be published of the staff clearing out their desks, taking down the “Keep Calm And Carry On” posters and trying to remove all traces of pornography from their hard drives.