I like mountainbiking and I do it frequently, in wintertimes, on the Dutch Veluwe. Riding through the forest on those sturdy tubes, I love it. So when Dave, the owner of the bike shop in Girona, asked me to join him on a mountainbike ride in the hills around the city, I didn’t hesitate for one second.

At home I ride a superlight full carbon mountainbike, only with suspension at the front. It’s an elegant bicycle, in my humble opinion. When I saw the mountainbike I could use here, my jaw dropped. It not only looked like a baby elephant, it also weighed as much. Full suspension. And made out of plumbum. I’m not kidding. “Do I have to ride this thing uphill?” I asked Dave in despair. “Yes, but more importantly – downhill,” he grinned.

My jaw dropped a bit further. Dave already told me he is a downhiller. You know: an extremely cool dude on a bike, who can do any kind of tricks on stairs and who just lets himself fall down from a mountain like an eagle. I don’t do that so often, mainly because on the Veluwe, there are not so many mountains to let yourself fall down from. Dave saw my face going paler and paler and assured me he would take it easy on the downhilling. Relieved, I rolled my elephant out of town.

We pedaled up over a wide dirt road. Nothing technical or complicated about that. Bit boring, actually. Dave seemed to have taken my worries quite literally. Was it going to be a bit more exciting than this, I asked him casually. Dave laughed. Did I really think we already started? The road uphill was just the preparation. The warming-up. Up the mountain, we would go for a little bit of downhilling. At the other side of the hill. He pointed at a flag at the top. See, from there on. 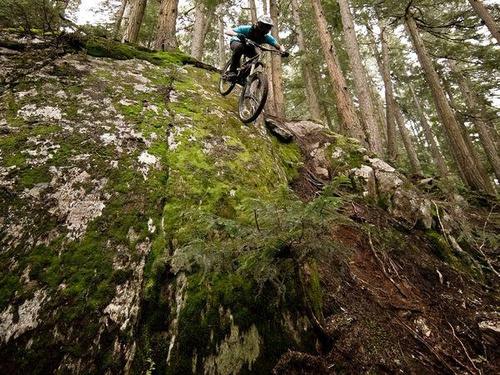 I watched and the only thing I saw was impenetrable forest clinging to a cliff. “It is dead easy, really,” Dave assured me. “A piece of cake.” We reached on the top. Somewhere between the trees, Dave placed his bike at the edge of the abyss. He looked over his shoulder to make sure I also saw the path. Path? Is there a path over there? Which path, I only see an abyss, aaaarh! And then he disappeared into the depth. I peeked over the edge and didn’t see Dave anymore. I just heard him. He sounded like a flock of boars running around through the bushes.

Don’t be a pussy right now. Don’t think, don’t brake too much, just go. I swallowed hard and threw myself over the edge. For just 200 metres or so. With squeaking brakes I came to a sudden stop. Till then, my bike seemed to have followed an eroded riverbed. At this very point, that river would have become a waterfall, because it went straight down. Big rocks and gigantic roots were sticking out everywhere. Did Dave really go down here? Yes, he did, for I heard him yelling: “Come on, this is nothing! This is downhilling for grannies!”

Long story short – I managed to get to the bottom. With an average speed of 4,1 kph. And I just have to admit, it was a beautiful walk.