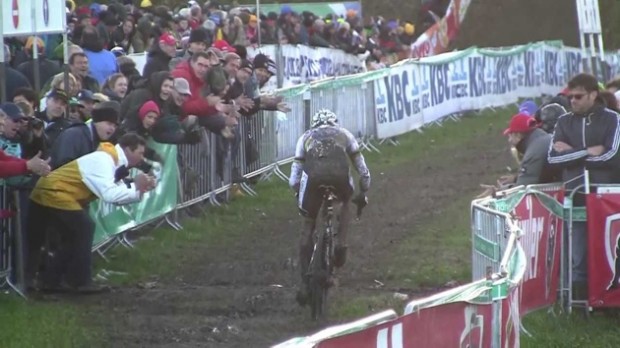 #SVENNESS 2.8 from In The Crosshairs on Vimeo.

In SVENNESS episode 2.8 we visit the Hamme-Zogge stop of the Superprestige cyclocross series. It is muddy and there is a flyover at every turn. But more significant (,or maybe not) Sven Nys is riding disc brakes!! But in the end, this race wasn’t about disc brakes but about perseverance. Niels Albert runs into the barriers and gets turned completely around in the first 30 seconds of the race. He slowly chips away at his deficit and by the end is soon back in contention. For this race we focus on riding in the mud, the run vs. ride decision, the picket fence, and flyovers flyovers flyovers.

Please visit www.cyclocrossbook.com to learn more about Skills, Drills and Bellyaches: A Cyclocross Primer. It’s all you need to know to create your own SVENNESS on the cyclocross track. And the sale of this book helps us to continue producing these SVENNESS videos. It’s a win-win.

Also check out our shirts, socks, gloves and WTFkits waterbottles at http://www.crosshairscycling.com/shop/. The SVENNESS shirt is sold out but we are coming out with a second design shortly. So stay tuned for that.

Music in today’s episode is by: