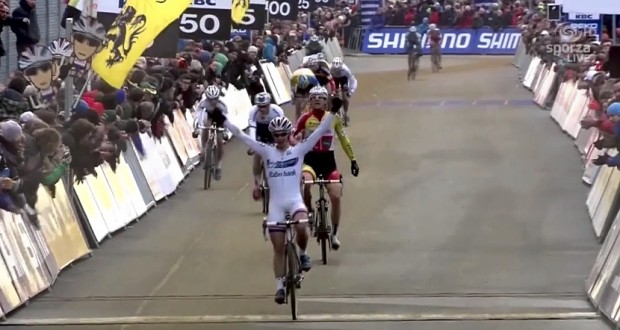 #SVENNESS 2.13 from In The Crosshairs on Vimeo.

Episode 2.13 of #SVENNESS takes a look at the UCI Cyclocross World Cup race that took place December 26, 2013, at Heusden-Zolder. This race features the return of former two-time elite cyclocross world champion Zdeněk Štybar. The race is in the red from the start with Štybar, LvdH, Marcel Miesen, Rob Peeters, and Philipp Walsleben pushing the pace. Ep 2.13 focuses on a crazy start, the ongoing tops vs. drops debate, and the tactic of “go.” No mud, no sand, a tough run-up, a killer descent and some super high-speed racing. The only thing this racing is a Sven vs. Niels battle. But it’s nice to bring in some other characters for a week.

#SVENNESS is presented by Skills, Drills and Bellyaches: A Cyclocross Primer available at www.cyclocrossbook.com and CrossVegas, America’s largest cyclocross race, which takes place September 10, 2014, under the lights in Las Vegas, Nevada.

Please help support #SVENNESS by picking up the latest SVENNESS t-shirt. Check out the design at www.svenness.com.

Footage for this episode via Sporza: sporza.be/cm/sporza/wielrennen/veldrijden