Just ask any ex pro over 40 about the butterflies and he’ll know what you mean. The last 40k of a race used to be the best place to look for the so called “butterflies.” These weren’t the nerves racer’s felt coming up to the hectic and dangerous sprint, nor the visions they saw in a hypoglycaemic haze. “Butterflies” were what the racers called the silver packets containing pills and powders which the riders gobbled down to put something back in the legs, and take something out of the head. Once they’d charged up, the riders weren’t so stupid as to take the evidence with them and they left the silver foil packs to flap away in the wind. Like a swarm of tiny creatures, the packets fluttered briefly in the air before falling to the ground and their eventual demise under the churning wheels of those who perpetually chase the “chargeurs.” Perhaps their butterflies had already been set free, on a big climb or closing a gap for the team leader, or perhaps that day they were racing à l’eau Claire – and as a result not racing at all but merely struggling to survive. 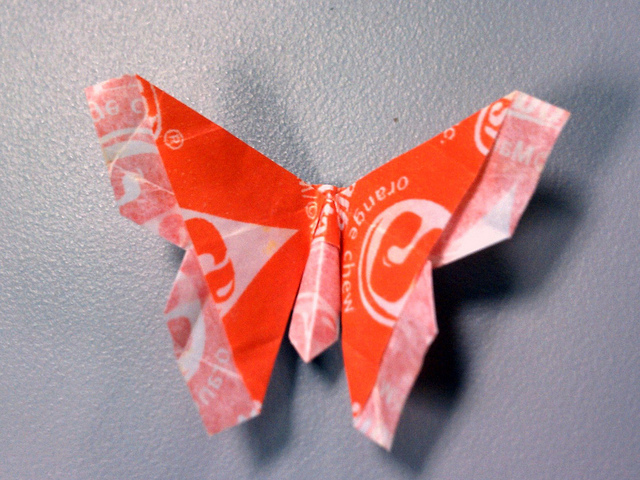 Come into the last 40k of a race today – or woe betide the last 10k of a “sportive” – and it’s not so much a few fluttering butterflies as a flock of colourful hummingbirds seemingly struck down by some kind of poisonous gas. All over the sides of the road lie discarded wrappers, half-eaten gels, and tossed bidons. Throwing your bottle to a spectator is one thing, it’s a way to reach out and touch someone; I still recall watching my first tour of Britain, and I still have the bottles. However, throwing non-biodegradable foil wrappers into the hedgerows of a town which has been kind enough to close it’s roads to allow you and 9000 other dentists to ride (not race) your bikes 100 miles in 7-1/2 hours is not pro, it’s not classy, and it’s not acceptable.

I’ve heard all the counter arguments: “It makes everything else in my pockets sticky.” “I can’t reach around to put gels away, so I tuck them in my shorts [or even worse tape them to the top tube] then throw away the wrapper.” “I was going to come back for it.” Rubbish. If you lack the co-ordination to a) consume a gel in its entirety so that it doesn’t leave goop all over your pocket or b) access all your pockets, then you need to seriously reconsider your position on the bike, or indeed your choice of hobby. And no, you were not coming back for it, because if you had the energy to ride 10k back and pick up your gel then you most likely had the energy to pocket it in the first place.

Now if you really must keep wrappers separate, there are some pretty cool jerseys out there (including the maillot jaune) which let you do that. Frankly, I’ve always had a pretty high level of success popping used wrappers in between my jersey and shorts at the back. If I get sticky, its not the end of the world, I like to shower after races anyway. I hope you do as well.

You can reuse your wrappers as well. I’ve saved many a ride with a foil boot for my tyre but you could also make a cool bag. I’d love to see more gel companies working on reusable flasks (credit to Hammer, they make one) or biodegradable packaging (credit to bananas – the original and the best biodegradable high potassium sucrose/fructose mix energy product) but this will only happen if consumers start showing the slightest modicum of concern.

With races increasingly struggling to get authorization from local councils and promoters finding higher and higher levels of opposition from localities, this kind of thing IS becoming an issue for our sport. I saw a racer get a time penalty for dropping a wrapper last year. He complained and the whole peloton turned on him. This is the kind of collective condemnation of anti-social behavior which society relies upon, so next time you start seeing the butterflies, let fly yourself.