Lance is the most tested athlete, amateur or professional in the history of sport. We don’t know exactly the number but we think it’s around 300 separate tests that he’s undergone and he has never had a positive test.
Tim Herman, Lawyer to Lance Armstrong, July 2010

Throughout his twenty-plus year professional career, Mr. Armstrong has
been subjected to 500 to 600 drug tests without a single positive test
Civ. Action No. 1:12–cv–00606–SS July 2012

So just what is the total, how many times has he been tested? We will get onto that, but firstly, some details on just how these figures are calculated.

USADA
The United States Anti Doping Agency has been in effect since 2001, and all of their testing histories are freely available on their website. Between 2001 and 2011 Lance has been tested a total of 29 times by USADA, this figure including tests at races, out-of-competition tests, and bio-passport controls. Compare this to the likes of George Hincapie (38 times), Levi Leipheimer (40 times), and Kristen Armstrong (66 times) over the period that Lance was active.

AFLD/WADA
As representatives of WADA, any tests conducted by the AFLD (French anti-doping authorities) are also recorded, giving us the total number of tests from the ASO races including the Tour de France, Critérium du Dauphiné (Formerly Le Dauphiné Libéré), and other races. There is some discrepancy. L’Equipe reported in 2005 that Armstrong had been subjected to 63 UCI tests up to and including 2004. For the purposes of this diagram, and in a way that actually favours Lance, we are using a figure higher than this total of 63.

1990-1998
Very little information exists for this period, but what we do know is that very few (to be read as no) out-of-competition testings were conducted during this period. Race winners were, on occasion, tested and on even rarer occasions other podium placings were subject to anti doping tests, along with occasional spot checks at the Olympic Games. For the purposes of this diagram we have credited Lance with an anti-doping test for every single race win and podium over this period, despite evidence that this was not the case. It is acknowledged that the US Based lab of Don Catlin conducted around 2 dozen tests on Armstrong over this period.

So on to the testing figures, just how many times has Lance Armstrong been tested over a 20 year career? 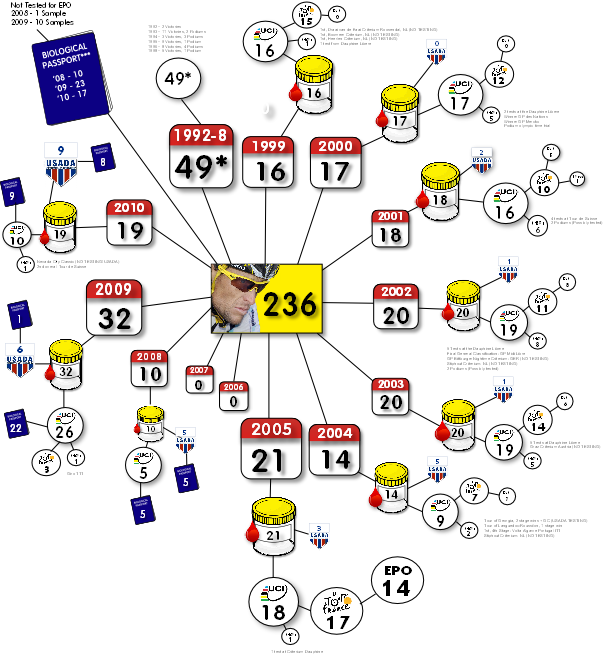 Two Hundred and Thirty Six Times? That’s a long way from five hundred. And it must be noted that this is a highly-exaggerated figure. Not all wins prior to ’99 would have resulted in tests, many of the Bio-Passport controls were not tested for EPO or other PEDs and were used purely as blood markers. One can only ask, what of the other 250 tests?

Notes on the chart:

*49 victories and podiums between 1992 and 1999. Not all of these race had testing and the actual number of tests will be far lower

*** Bio Passport tests are made up of a mixture of Urine and Blood tests. Not all of the samples are tested for EPO, etc., and many of the tests are used purely for markers and not for testing for PEDs. Of his 27 tests in ’08-’09, 11 were not tested for EPO

# Any figures listed as “other” indicate that tests may have been performed but this will not be the case for all, so for the purposes of this chart it has been recorded as such; thus for all intents and purposes the figures on this chart will be higher than the actual tests performed.

## L’equipe claim that Armstrong was subjected to 63 UCI tests between 1999 and 2004. If that was the case it would reduce the total number of tests for Armstrong by 42

Author’s Comment
This will never be an exact science, the nature of the history means that nothing can ever be categorically claimed as 100% factual. The information on this chart was put together by a number of people who have a vast knowledge of the history going back 20 years.  There will always be margin for error, a test here, a couple of tests there, it may be claimed that one year was 24 tests rather than 22. The margin for error, however, is small, and it should be noted that it is not, and never will be an error of 250 or more.

Credits:  With huge thanks to @TheRaceRadio and others for the information contained on this chart.