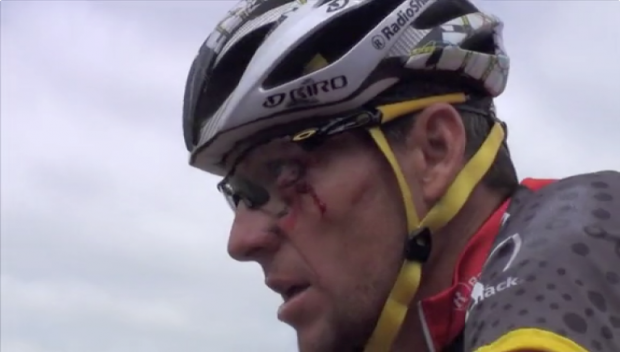 On May 20th, 2010, Floyd Landis’ allegations of extensive doping by Lance Armstrong and others was made public. At the time, Lance was in the middle of the Tour of California. He experienced a rare crash that very same day, which led to an even more rare decision to drop out of the race entirely. 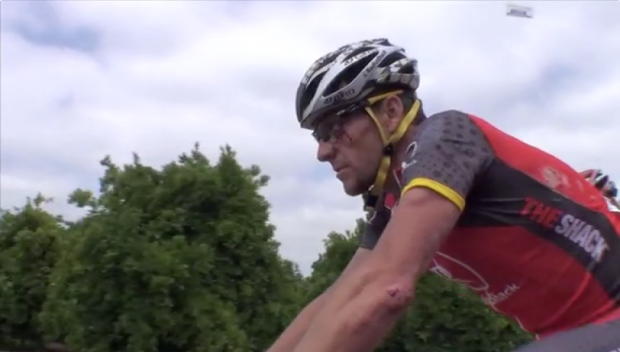 As luck would have it, Bicycling Magazine was riding along in the team car with Johan Bruyneel, filming it all.  Within hours Bicycling had the video up for viewing.  It was a glimpse at a side of Mr. Armstrong that the world had never before seen. 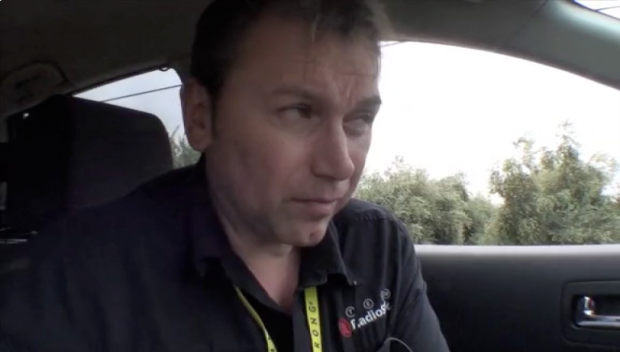 This video showed a worried, nervous, confused, and perhaps even panicky side of Lance.  It seemed surprising to some that this had been posted at all.  Lance was notorious for exerting pressure on the media to make sure he maintained control of the narrative.

Less than two days later, Bicycling removed the video.  At first it seemed possible this was just an error, or that perhaps the content was being rearranged or updated.  But the video never appeared on their site again, and no explanation was ever offered.  For many, this confirmed the authority Lance had over the press.

I was lucky enough to have a cached copy of the web page available, and when I loaded it, the video was still working.  They had removed the link from their video page, but had not yet removed the actual video file, which was a plain mp4 file.  I still wasn’t sure if the removal was an accident or intentional, but I downloaded the file just in case it was about to disappear forever. 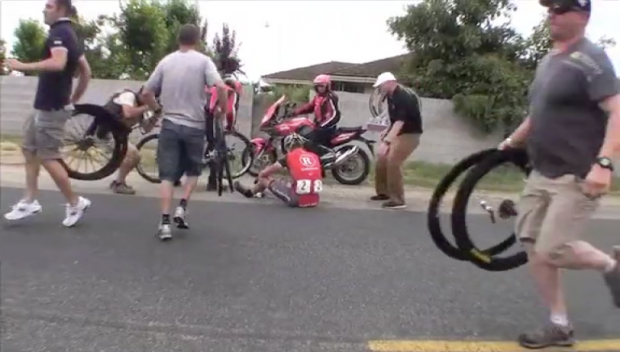 I didn’t do anything with the video immediately.  Even when it was clear that Bicycling‘s removal was no accident I sat on the video. Probably more out of laziness than anything. But the story continued.

In May of 2011 (May is not Lance’s month) Tyler Hamilton came out with his allegations on 60 Minutes.  Momentum grew, and a federal case against Lance and others was in the works later in 2011, and in parallel a USADA case against Lance was developed.  The federal case was dropped in early 2012 (although apparently not for lack of evidence), but the USADA case proceeded.  In April of 2012, Lance and Tyler had the unfortunate restaurant incident, and in May of 2012 Lance publicly commented in an Outside Magazine interview that he would not fight the USADA case if it went forward.

I’d been meaning to make this video available in some form for a long time.  With everything heating up, it finally seemed like it was time.  It was really not a decision I undertook lightly.  I did a lot of reading about fair use, and what did and did not qualify.  What I found convinced me that I could publish the entire video and still be protected. 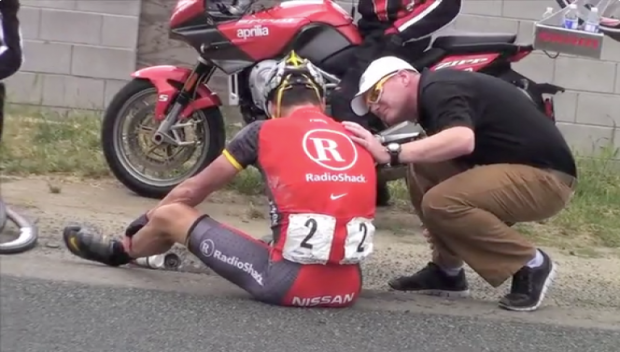 One choice I had was to edit the video, use pieces of it, and add my own interpretations.  This is an approach that I was sure even without any research was standard fair use (although even being well within standard practices doesn’t necessarily prevent a lawsuit).  But (aside from more basic laziness) there was a very good reason why I didn’t want to do that.  In edited form, and with the original video unavailable, anything I did could be questioned for content.  “How do we know that’s what it meant when we can’t see the original?” And perhaps more importantly, I wanted people to consider the question of why the video had been pulled.  Without the entire original video available somewhere, this was impossible.  This is what ultimately convinced me that uploading the entire video was the right choice, and that it was fair use.

On May 14th, 2012 I finally got off my ass and uploaded the video to YouTube. 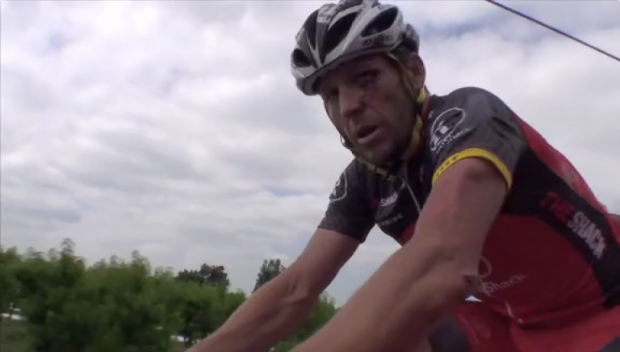 Fast forward again, to October 20th of this year, when Neil Browne (@neilroad on Twitter, where he is apparently a big deal) wrote an article about Lance’s bad day, and wondered what ever happened to this video.  Twitter was quick to answer, and directed him to my YouTube upload.

Four days later, after the video had been accumulating views for over a year, I received a notice from YouTube that “This video is no longer available due to a copyright claim by Bicycling Magazine.” (I didn’t notice this until November 5th).

When YouTube does this, you can either accept the removal and go on with your life (the wise choice if it’s actually copyright infringement), or you can file a counter claim, which says that basically the claim by Bicycling was a mistake and that I had a right to post the video. This is the harder choice, because then Bicycling might be more likely to choose to sue me.  If they don’t, within ten days the video goes back up. But if they do sue me, that’s not going to be a good time.

It’s interesting to me that they’d pursue this right now.  The original removal made some sense.  Yes, you could call it weak, and caving to the apparent power of Lance.  But back then pretty much everyone was doing that to varying degrees.  Even after the Floyd allegations, Lance remained the golden goose for a long time, and everyone still wanted those eggs.

But now that’s all changed.  Lance confessed.  He’s been stripped of his wins, and had the title “disgraced” officially added to his name.  After the confession the chains were off for the media.  Suddenly we had a whole lot of news coverage that looked very different from what we had seen weeks earlier.

So given that, why would Bicycling request the removal of my uploaded copy of their video now?  One possibility is that they just didn’t want to be reminded of their dirty hands in the original removal of the video.  That’s a bit silly because as I said, most news organizations had dirty hands back then.

The other possibility is that Lance is finding ways to exert his influence again.  Indeed, competely independent of this incident, I’ve seen people online say that it seems that Lance is once again trying to control the story. There’s a movie coming out about him that’s not likely to be very flattering, and a little damage control could go a long way.  CyclingNews just did a big exclusive interveiw with him also, and he’s been more active on Twitter again.

So it’s also possible that the timing of this removal is that Lance is still a nice-looking goose, and Bicycling still wants another golden egg or two.

Ultimately this is what helped me make my choice.  I have filed a counter claim with YouTube.  The same media politics that likely caused its original removal might still be at work here, exerting control.  People should be aware of this, and have an opportunity to weigh in on what this means.

Now that I’ve made my choice, Bicycling has some options.  They can sue me.  I don’t think they can win, and I don’t think that’s going to put much polish on their brand.

Or they can do nothing.  My copy of the video will be back up on YouTube in a couple of weeks, and we can all quietly slink back into our corners and pretend it never happened, like a blind date gone bad. 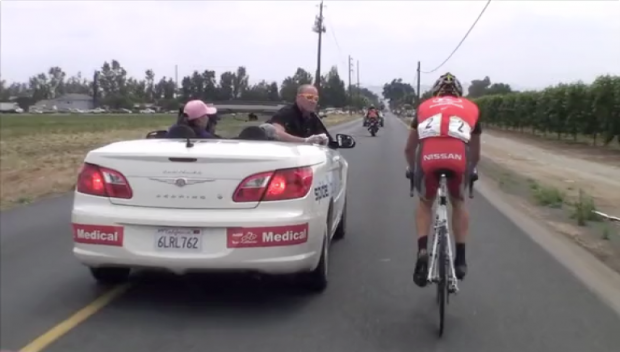 But I’m going to offer a third choice.  Bicycling could put the video back up on their own website, permanently.  If they did this, I’d have no need of getting this video back up on YouTube.  It’d be a great demonstration that first of all they aren’t really interested in suing people for good faith fair usage of news content.  And more importantly it would demonstrate that they are their own master.  Their video would be home again, and they’d get all the credit and glory.

On the one hand, this may seem like just one little stupid video.  And really it is.  Hardly a game changer in the grand scheme of things and probably only of minor interest to even the most hardcore followers of cycling’s dark side.  But to me it seems that the cycling community has to get away from knee-jerk protectionism, and this is as good a place to do that as any.

I spoke with Peter Flax, managing editor of Bicycling Magazine this evening and he was able to clarify several issues, and squash some of my “conspiracy theories.”  Killjoy.

He said it was the hope that Bicycling Magazine would be able to get this video back up on their own website. This would be a win for everybody. The original creation and subsequent removal happened prior to his term as managing editor, and he hadn’t had a chance to look at the specifics in this case, but was able to offer some insight into reasons for the removals.

The video was produced in a sponsored content deal, in which the video producer (Bicycling Magazine) makes a deal with a sponsor to gain access for filming. Generally a deal like this is for joint ownership of the material so that Bicycling can use the material on their site, and the sponsor can use it for promotional purposes.

As Mr. Flax understood those events in this case, the sponsor (not specified by Mr. Flax) decided that the material was not consistent with the image they had hoped for, and requested that Bicycling take it down, and they complied.  He also told me that since that sponsorship agreement was no longer in place, it was his hope that this meant that they had the right to repost it on the bicycling.com website, but at the time we spoke he still hadn’t had a chance to look at the specifics of this particular agreement.

He also addressed the more recent removal of the video from YouTube.  First let me clarify that, despite some of my earlier comments on Twitter, Bicycling is apparently a copyright holder of this material, and so they did have every right to file their claim of infringement with YouTube.  He said filing the infringement claim was just normal business practice when they discover copyrighted material, which seems perfectly reasonable. While I still maintain that my particular usage is fair use, most cases of using entire unedited copies of material do not fall under fair use.

He also expressed some dismay that I had not contacted Bicycling staff prior to publishing this.  He’s probably right.  I’m not a journalist, I’m just some hack on the Internet who felt that this needed to be out in the open.  And in this new world, where ordinary citizens participate more and more in media, it isn’t clear to me exactly what my role should be.  But explanations are not the same as excuses.  With hindsight, I see that I should have contacted them first, and for that I’m sorry.

Sarcastitom is the Internet persona of a long-time cycling fan, and just another wanker trying to justify his own bone-idleness. You can follow him on Twitter at @sarcastitom