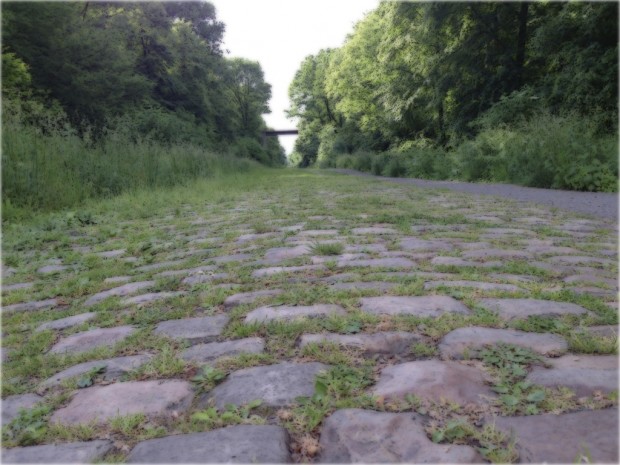 The end of the road

It’s a painful thing to come to the sudden realization that you’ve run out of pavement mid-ride, but unfortunately that’s what’s happened to me today. I didn’t see it coming, but I probably should have. There I was, blithely pedaling along, when all of a sudden the road fell away and a crevasse loomed. I only saw it as I was plunging into it.

You’re probably wondering what the hell I’m talking about. I think I am too. It’s hard to wrap my brain around everything that has happened in the past year.

I won’t launch into the by-now familiar story of the rise and fall of the Kimmage Defense Fund. If you’re still unclear about that whole situation, read Shane Stokes’ coverage in Velonation and  Joe Lindsey’s excellent piece on it for Bicycling Magazine here. It’s an ongoing saga, and hopefully there will be some closure to the litigation portion. The other part – the fallout from the UCI Overlord effect, and the future, well, that’s another story waiting to be written.

Suffice it to say, from September of 2012 until March of 2013, things seemed to be humming along for Cyclismas, and I was filled with hope and optimism that even the little people could have a powerful voice in the world of cycling, and I was giddy that I was one of them.

Exactly one year ago, I was finalizing travel plans to head to England to launch the Trek-Cyclismas Pro Commute Team project. It was an ambitious and innovative concept hatched at the London Bike Show in January of 2013 – to sponsor a team of ordinary people who cycled to work as if they were a “professional” team of commuters and outfit them like a pro cycling team. They’d have bikes, kit, a DS, training camps, and “races.” The goal was to demonstrate through humorous short videos, blogs, photos, and other social media that cycling to work was not only a viable transportation option, but that it could be awesome and fun. More people on bikes. Cool, huh?

It’s funny how quickly things can change. Less than a month later, I discovered that my business partner was also the biggest con-artist in the cycling industry, and everything I had been working on for over two years was built on a web of lies and deceit. The TCPCT project was hanging in jeopardy, with the money to fund it now disappeared. My credibility as an editor of a website largely based on the writings of a liar was questioned. The people who had come on board to work with us had no financial security (and, as it would turn out, no scruples). Advertisers and project partners bailed on us. And I became the principal in a lawsuit that was going to end up costing me more money in total than had been raised to defend Paul Kimmage in his fight against the UCI’s and Pat McQuaid’s and Hein Verbruggen’s specious defamation lawsuit.

In a knee-jerk moment of defiance, anger, stubbornness, and sheer stupidity, I decided to personally (and when I say personally I mean with the financial support from my husband’s lifetime savings) continue funding Cyclismas, its remaining staff, and the TCPCT project. I foolishly believed certain people when they told me they would be able to bring in new advertisers and make Cyclismas not only self-sustaining, but also successful. So I paid salaries. I paid for travel. I paid to bring the entire TCPCT team to Flanders to “Commute the Classics” and get interviews, video footage, and more to help promote the project. I took the Cyclismas crew to the 100th edition of the Tour de France. I supported two guys for five months with salaries that were better than what your average BBC producer makes.

And I got royally screwed.

I have nothing to show for the bulk of my investment in 2013, except for a really cool bunch of Instagrams, a tiny chunk of the pavé from the Arenberg, some Strava segments from riding up Rocacorba, Mt. Ventoux and Alpe d’Huez, and a picture of Michelle Cound in the hotel elevator holding up Chris Froome’s sparkly maillot jaune from the final night on the Champs-Élysées. I have no website content, since pretty much all of my contributors have upped sticks and moved on to greener pastures, and I have no sponsors, no income, and no staff – as they decided to fuck off with my money, my equipment, all the Road Reel shows and interviews we produced, and start their own venture. Now how does that adage about “fool me once” go again…?

Oh, but I have memories. Memories of starting a group ride up Mt. Ventoux with Paul Kimmage, Dave Smith and Justin Pickens, only to have them drop my ass within the first mile out of Bedouin and let me spend the remaining three hours toiling up the mountainside all by myself. Memories of arriving in Alpe d’Huez all ready to ride that epic climb only to discover that my “friends” had neglected to pack my gear from our stay in Valreas and I didn’t have any cycling shoes or a helmet. Memories of feeling like a wallet with legs and not much more for pretty much the entire trip.

But it all looks so fucking awesome on my resumé.

Fast forward to today. I can’t take any more. I’m done trying to swim against the tide and try to make something out of this festering pile of bad memories and heartache. I’ve had my last disappointment. The Trek project is officially dead. People who promised to help did their best, but in the end the lure of more lucrative and enticing ventures has pulled them away. Derek, my most stalwart supporter and the person who made me think I could still make something of this venture, has thrown in the towel out of utter disappointment that in spite of his best efforts, it’s just not going to happen. I don’t blame him, he’s not getting paid for this, and all of the perks he was promised never materialized.

So if he’s done, I’m done. I can’t do this alone, and frankly I don’t want to. I’m not going to spend all of my time trying to nurture a website known for nothing now but a few sporadic articles that I can coax and cajole out of friends, and a podcast that probably won’t be happening for much longer anyway. I have to be realistic. People have lives to lead, jobs to do, teams to run. And I’m not getting any younger.

So this is goodbye. Farewell Cyclismas. You were one hell of a roller coaster ride.