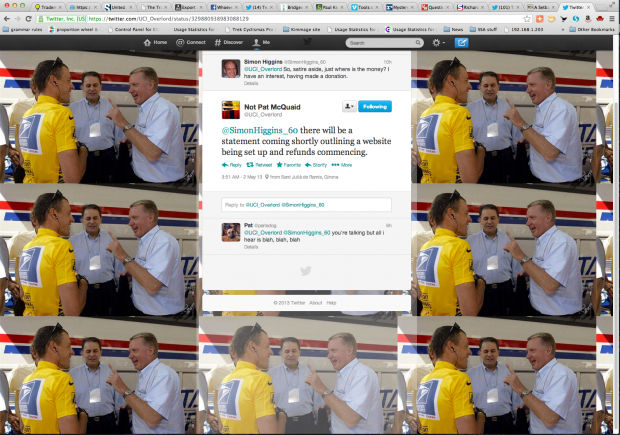 On July 9, 2014 a hearing was held in Worcester Superior Court before Judge David Ricciardone to consider the contempt charges against Aaron Brown and Siroque Holdings. I was called as a direct witness, and at the end of the court session the judge indicated that Aaron Brown had until August 8, 2014 to comply.

On August 12, 2014 I received the official court transcript with the judge’s ruling.

Here is the summary of the ruling:

“Present at the hearing on contempt today’s date were the plaintiff, Lesli Cohen, and her attorney, James Donnelly, and appearing by telephone, the co-plaintiff, William Hue. The defendant, Aaron Brown and Siroque Holdings as well as the Rule 19 party, Paul Kimmage, were not present. This Court finds that actual notice was given to the defendant’s representative in Court, and that notice was sent to the last known address of Aaron Brown and Siroque Holdings.

After hearing the Court finds as follows: Effective January 16, 2014 Justice Robert Gordon of this Court issued an order which basically enjoined the defendants from disbursing any funds from the Paul Kimmage Defense Fund, requiring that they identify the location of banks and account numbers where the funds were currently held, and also providing an accounting of each prior donation to and disbursement from the account.

The latter two parts of the order were to be complied with by February 25, 2014. The Court finds that this order was clear, unequivocal and quite simple in its terms and furthermore, that it was signed by each party or their representative as of January 31, 2014.

The Court credits the representations of counsel and finds that the defendants did not respond in any fashion to the order, that they produce identifying information regarding the accounts, regarding Paul Kimmage Defense Funds at any time subsequent to the order. This is also borne out by the docket of this matter which was admitted as an exhibit.

The Court also credits the testimony of Lesli Cohen who received information from at least two donors that they received a refund of a portion of their donations to the fund during the month of March 2014 in direct disobedience of the Court order.

The Court also finds that the specific notations on Exhibit three to the effect that, “a small group of U.S. donors is trying to block the refunds” indicates that the defendant was aware of the Court order and willfully violated it.

Accordingly, this Court concludes that there is clear and convincing evidence that the defendant violated a clear and unequivocal order to provide information regarding the whereabouts of the funds and not to make disbursements.

The Court will set a thirty day deadline for compliance with this order and will entertain a motion for further sanctions if strict compliance is not had by August 8, 2014.

A final Pre-Trial Conference date has been set for October 10, 2014, at which time all parties are required to attend. If Aaron Brown fails to comply and fails to appear, it is highly likely that the court will rule in favor of me, Bill Hue, and Paul Kimmage and assess full damages (the full value of the missing Kimmage Defense Fund, as well as legal costs for a year and a half of litigation) against Brown and Siroque Holding, and enter a final judgment against Aaron Brown that will be entered into United States legal records. This will set a precedent for future litigation in other countries against Aaron Brown, should anyone else wish to pursue him internationally.

We’ll keep you updated as to any further developments.