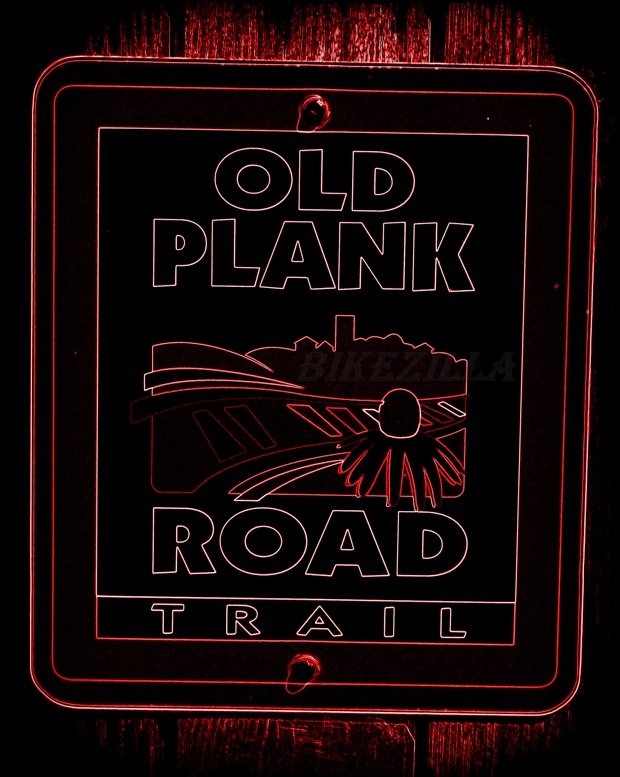 The sky was very clear and the sun especially bright, making the shade on the heavily tree-lined trail deeper and more mottled.

Photo© 2013 by Bikezilla/Tom. Available for purchase on Etsy.

Riding toward me were a brother and sister. He was maybe 14, her about 12.

I was pedaling down a long straight and they were just coming out of not-quite-shallow curve, chatting as they rode. The boy was looking ahead and saw me, with my little blinky light in my helmet, before he even left the curve, but his sister was oblivious, looking at him as she yapped away.

As we got closer she began drifting into my line, as if my bike was a magnet drawing her toward us.

Her brother tried to get her attention:

She turned her head more sharply toward him, her line drifting harder into mine.

“Christine, look ahead.” He backed off his own speed and she drifted ahead of him, her line wobbling slightly back in his direction.

Either to spite him for telling her what to do, or because she was just a little ditsy, Christine instead turned even more toward him, her body beginning to twist with the effort, her line now coming right at me, then opening slighting beyond mine.

Her brother stayed calm, but tried again to get her to pay attention.

“Christine, turn around.” His chin lifted to point at me.

She continued looking at him, her line coming back directly in front of mine, but floating back toward her brother.

She was doing a carefree, flighty rendition of the Stupid Squirrel Dance, and my thoughts seesawed with her line. As she swayed to and fro across the trail I calculated and recalculated the odds that she would or would not wander in front of me just as we were passing and whether or not I would have to brake or change my line to avoid a crash.

We were maybe 200 feet apart when I said, “HEY!” touched my brakes and veered ever so slightly to my right.

Christine finally woke up, startled, and briefly lost control of her bike as she turned and saw me closing on her. She nearly fell over directly in front of her brother, kind of righted herself, her eyes open wide, her mouth gaping like a choking fish. She said, “Ohhhh!” as we barely failed to brush against each other and her foot came down on the trail to prevent her from toppling.

Disaster averted, her brother laughed lightly at her as he came nearly to a stop to avoid running into her. He said something else to her, in that same calm tone, but I couldn’t hear what it was as I entered the shallowish curve they had just exited and they were gone, vanished into the sun-speckled shadows of the overhanging trees.