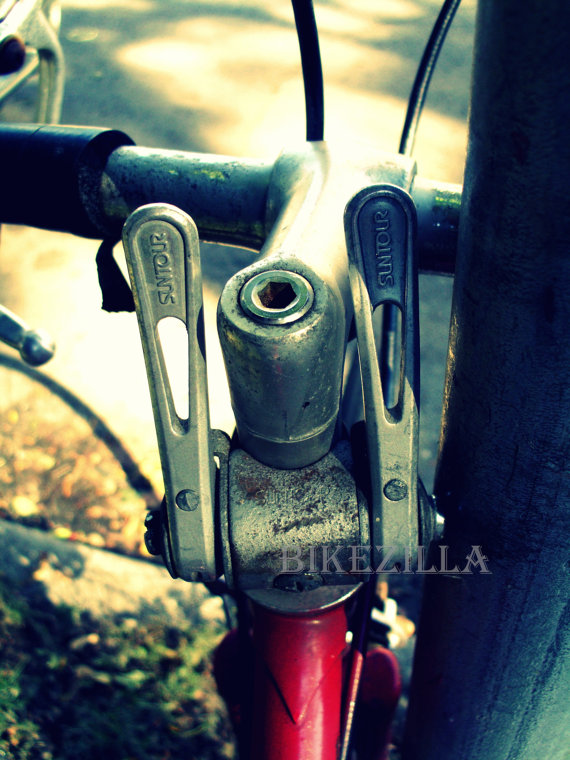 Mark was one year behind me in school, fat and whiny, with freckles and coarse reddish sandy hair. He was like Howdy Doody on a constant Twinkie high. His family lived comfortably and you could tell that his parents had Mark at the bottom of their list of favorite children.

He was also my next door neighbor and the kid who I spent the most time with on or around a bike during many summers growing up in NJ. I wouldn’t say we were best friends, but we hung out a lot more than either of us did with anyone else.

Most of that hanging out time we spent talking, or talking while we went about the business of children on summer break. It’s only now, a gazillion years later, that I realize how much we did that, how smooth and easy those times were, how good a conversationalist he was.

Most often we fished and we’d usually ride our bikes the few miles to a favorite spot on the Muskenetcong river. That included about a mile-and-a-half-long ride down, and later back up, Main Street at grades I’m guessing run between 5% and 9%.

You’d expect that Mark, with his extra weight, would have struggled on a the ride back. Early in our friendship that was true, but we rode it so often that he came to take it almost as easily as I did.

As we rode down that hill, our fishing poles stuck out ahead of us as if we were a pair of knights riding with lowered lances. I don’t think there was a single fishing trip where we didn’t make note of that or ride full tilt downhill as if we were charging a dark and sinister opponent who was bent upon our deaths.

This was a couple years after Mommy Dearest left my beloved Stingray down in Knoxville, TN.

Somewhere between the loss of my Stingray and the riding down Main to go fishing, a family friend had cleaned out his barn and given us half a dozen ancient bikes, all cruisers, that had been sitting unridden and covered in dust for at least a couple decades.

Most of the tires and all of the tubes were rotted beyond use. Some wheels were warped, some chains broken, some seats missing. But that pile of scrap bikes made my heart race. There was beauty and life in it.

With a little garbage picking and a few trips into Washington to buy tubes and chains, there was more than enough good stuff for me to build a few serviceable bikes.

The bikes I made were not works of art. They were Frankenbikes. But they were as lovely as any bike ever on any road.

That’s where Mark and I invested large chunks of our time. Coming up with different configurations for that pile of long-ignored wonder, trying them out, figuring out that some chains wouldn’t work on some bikes, that some wheel combinations worked and some would make the pedals hit the ground and wipe me out, that some rotted tires had some miles left in them, that some forks looked cool when you used one to extend the other but some just looked stupid and rode like shit.

Sometimes my neighbor two doors in the other direction, John, would hang with us while we worked on our bikes, or built mine.

John was a year ahead of me in school, but he should have been two years ahead and he was always at risk of flunking again. Except the school wouldn’t allow him to go back another grade because of his age, so he always managed to just make it to the next.

They tried making him get there honestly a few times, assigning him to summer school. But, he just didn’t show up most days and they ended up giving him a phony pass anyway.

John was taller than me and more muscular. His brown hair was wavy, ran about halfway down his neck and he had a nervous habit of running his right hand through it and then doing a kind of rock star angling back of his head while he shook it all out.

He was about 13 and already smoking when I first met him.

John could be the coolest, most genuinely kind, most generous kid (or person) I knew, or he could be the most psychotic. Mostly he was okay.

The one person in his family who really gave a shit about him – his favorite sister, Barb – stepped in front of a semi out on Route 31, down by the First National Bank, about the time he turned 14. She was about 18 at the time, maybe just a little older.

John didn’t talk about her or what happened very often, but when he did it was obvious that time didn’t ease the sting very much and that he’d love her for the rest of his life. He was a hardass, so of course he’d never cry about it, and if he did neither Mark nor I were asshole enough to notice out loud.

Some people said it was an accident, but the trucker who hit her said that in the moments just before she stepped out in front of him, she looked up into his cab and right into his eyes. Someone once said that she’d mouthed, “I’m sorry.” The guy never drove a truck again after that.

The story haunted John and during the times when his shitty family was at its shittiest he suffered moments of bitterness over her leaving him. But, mostly he just missed her all the time.

John was the most physically at-ease kid I’ve ever seen, which is not to say that he was graceful, because he wasn’t. But, he was loose from head to toe, no matter what we were doing. He laughed more and easier than anyone else we hung out with, but he brooded more, too. His body and his mind were naturally at rest, but his soul was in knots.

I can’t remember what kind of bikes Mark and John rode, except that John’s had very high handlebars and he had a thing for tall sissy bars. I only remember spending a shit-ton of hours with them riding.

“What kind” of bike was meaningless to us all, as long as you didn’t ride a girl’s bike. They were bikes, though it would be incorrect to say they were “just bikes.” They were cool and fun, but mostly they just were and that was enough. They helped define who we were, separately and as a group, though we didn’t realize it back then.

I can’t fathom, now, why I did it, but one day I removed the stem from one of the bikes I was building.

I was working on it out in front of my house, with Mark keeping me company. I got it tightened back up and Mark said, “I don’t think it’s straight.”

It looked okay from where I was. So, I called him names, then had him hold the bike and went to look at it from where he’d been standing. Yep. Crooked.

Mark shrugged. He wasn’t always the most helpful companion.

Good enough. I started snugging it in place.

Just about then John sauntered over (he was the greatest saunterer in the history of the world), smoking. He did that nervous thing with his hair and said, “That thing ain’t straight. You got a curve in your eye or something? I saw how crooked it was from all the way by my house but you can’t see it from right on top the damn bike?”

I sighed, aiming ugly thoughts at Mark, as if it was his fault. I started loosening it again.

Mark and I just looked at each other, because we knew John wasn’t worth a shit at anything that required tools. But he was John and it was pointless to tell him “no,” so I got off the bike and “accidentally” dropped the wrench when I handed it to him.

He looked at me with cigarette smoke curling into his eye and said, “Har hardy har har. That’s real funny, punk.” Then he stooped and picked up the wrench.

We let him play with it for a minute or so, then Mark said, “You made it worse.”

At which point John threw the wrench on the ground and said the two words he probably said more than any other two words in his life, “Fuck it.”

“Thanks, that was very helpful, Mr Straight Eye.” I said.

“Yeah. Well, ya know what? Fuck you. You wanna go down to your grandfather’s store and get a Crush? I’m buying.” His family was broker’n shit, but somehow John almost always had money, and he loved orange Crush maybe as much as Mark loved Twinkies.

Mark was torn, but he hung with me while John started down the street.

About that time my dad came outside, looked at me as I was loosening the stem, and unhelpfully said, “It’s crooked. Who taught you to put one of those things on?”

He shook his head with that look of disgust he gets any time he sees me ineptly attempting to fix anything. Then he went back into the house to watch some twenty-year old comedy rerun for the 53rd time and chuckle like he’d never seen it before while he sucked Pall Mall smoke into his lungs.

Mark turned around, running after John. After a minute I followed on a hodgepodge bike that had a crooked stem.