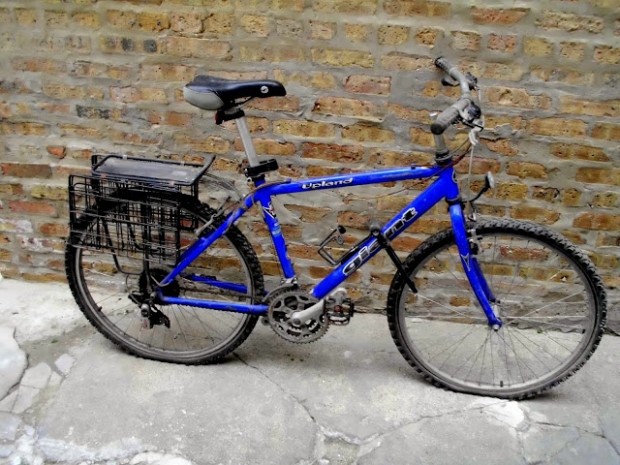 They’ve always been part of my life. But, not always in whatever way I want them to be at the time.

Right now it isn’t so much that I always want to ride them.

I want to gather them, but not collect them. I want to clean them up, repair them, give them to people who truly need them.

It’s such a sad thing to me when a perfectly good bike sits in a basement abandoned, or is thrown in the trash.

I also want to write about them. I love writing about bikes. Not about professionals and racing, and carbon fiber and titanium. But about simple people with simple bikes and how they’re connected to each other. About cruisers and skipchains and balloon tires, and prewar and postwar and style and unpretentious elegance.

My job, working a route on the far north side of Chicago, affords me to see a lot of things. Unfortunately, it does not often afford me the time to stop and photograph and interview, or even to just simply talk with and about all that it allows me to see.

Last week I rescued an old, steel-framed Giant Upland from a basement. It’s a beautiful blue, and it has a rack with collapsible cage-style panniers on the back.

Now it sits in my living room, waiting until I can afford to replace the cables, cable housings and pedals, plus maybe the chain, then put some fenders on it, and add a big basket up front. Then give it away.

Lesli Cohen, Editor of Cyclismas, is aware of what I want to achieve with this bike, and others I find. Together we’re hoping to get things rolling and maybe get three to six bikes per year into the hands of Chicago area homeless.

Right now we’re doing it with no money and no help, so the process is getting rolling slowly. But it’s still a dream and it excites me.

In the meantime the old blue Giant Upland sits in my living room, like a guest who I told could stay for a week while they tried getting back on their feet, but who never left.

About a month ago I was driving  in Chicago on Peterson (6000 north), heading east toward Ridge. There, on the north side of the street, was the most fantastic old woman. She was riding a cruiser in the same direction.

She wore an ankle-length, pleated gray skirt, a baggy floral top, and an absolutely enormous, wide-brimmed hat. Around the crown of the hat was a ring of giant flowers.

She rode effortlessly, sitting tall, her back perfectly straight.

The back of the bike had a rack and panniers, the front had a deep basket. There were plastic bags full of only she and God knew what, piled up high at both ends of the bike.

The sight of the glorious creature made my heart race. I had to talk to her!

But there was no safe place to stop and nowhere to park. By the time I drove a half mile down the road, turned around and came back, she was gone. I pulled into the private parking lot of a retirement home, where there was at least a dozen people standing around talking. No one knew her, or what I was talking about.

I drove up and down nearby side streets. She was on none of them.

I’m constantly coming up short in these plans. This leaves me feeling endlessly frustrated and worse, but no less excited about them.

I’ll keep chasing these little bike-related dreams of mine. If I chase them often enough eventually I’ll grab one.