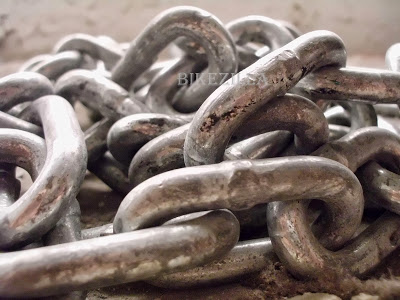 D had passed this bike, chained and locked to this stretch of fence, many times. It was an old bike. A mountain bike. It was pretty good once, but it had seen better days. It was still good enough to bring a few dollars, or something, once he let it cool off.

The particular padlock securing the mountain bike was an easy pick. Hit it with a hammer, just so, on both sides at the same time, and it would pop.

D hit it once. The lock twisted and didn’t give. Again. Not hard enough. Brace, swing. Pop.

A couple more seconds and the round-steel chain the lock had secured was pulled through the bike’s frame and tossed on the ground.

Then D was on top of the bike, pedaling jerkily toward a friend’s place. He for damn sure wasn’t taking it to his own digs.

For tonight he’d stash it inside the apartment. His friend would bitch about bringing stolen shit to his place. But this guy was easily shut up. Angry words up in his face, a shove, a smack, and he’d be cool with it all. Cool enough to stop his crying, at least.

In the morning D would ride the bike down the back alley to a Pakistani grocery where he could secret it in the basement. The store’s owner ran a lot of shit out of that place. A lot of shit. He’d pretend to not even see D roll in with the bike and disappear down the stairs with it, then tell him to help himself to a soda or something on his way out.

It’d chill down there for a year or longer.

They called him Maymay, but his name was something else. Something most people didn’t even remember and that somedays he wasn’t sure of, himself. He was in his later thirties, but looked like his later fifties and felt like a hard-worn later sixties.

His guts hurt all the time and he puked up blood at least half a dozen times every day.

The sun was high and bright and hot that day. It hurt his eyes and  made the slow, steady ache in his head turn into a low, sharp throbbing. He needed a drink. He was broke.

He hobbled out of the alley, hungry, weak, aching from another night sleeping on pavement with nothing but a ripped and filthy sleeping bag. He’d work his way down to McDonald’s and do some panhandling. His sleeping bag was rolled up and stowed in a heavyduty lawn and leaf trash bag that was beginning to wear out. He kind of carried it, kind of dragged it along with him.

D rolled up from behind him and startled the piss out of him. The dark spreading stain was hardly noticeable.

Maymay kept moving toward McDonald’s. D rolled along beside him.

Maymay looked at the bike. Someone, probably D, had halfassed painted it baby-puke yellow, but only in places. The places where there’d been any kind of identification.

“I told you I got nothin’. And that bike ain’t got no place to keep stuff.”

D forced Maymay into the next alley, then about halfway down it.

Maymay was scared. His shaking was more than just hunger and withdraws.

D said, “You gonna suck some dick, M. Then I gonna give you this old bike and you gonna go off and find yo’sef a nice milk crate to tie on to the front and make the whole thing good as new. You cool with that? I ain’t hearing you answer me, Maymay? I said, you cool with that?”

D tossed in an ass-beating, because he didn’t think he’d gotten fair value and you can’t let these fucking bums think they got one up on you.

Maymay found himself a milk crate, a length of chain and a padlock. He never talked about where he’d gotten the bike.

Maymay had a habit of dropping the bike on its side first thing when he dismounted. He’d drunk crashed it more times than he remembered, and a few more times when he wasn’t drunk but was wishing he could be.

The bike was old already, and not in the best shape. He managed to replace the tires once, though the “new” ones were cracked on the sides. He’d replaced the tubes a couple times but didn’t get the stems lined up very well with the stem holes in the wheels.

The seat came loose, then fell off. He tied it back on with an scrap of towel he’d found.

Over time the baby-puke yellow paint mostly wore off, along with the decals it had hidden. A brake arm broke off on the front, another snapped in half on the back.

The back tire wasn’t holding air. It was going flat every day and the guys at the gas station had stopped letting him fill it for free. He tried to get a new tube for it but couldn’t, at least not without spending some of his vodka money on it.

Wednesday came and it was as good a day to give up as any. Maymay chained his bike to the bike stand outside of McDonalds, that one on Clark just north of Southport. He begged some lunch and some cash and when he was all done he cut the milk crate off the front and walked away. 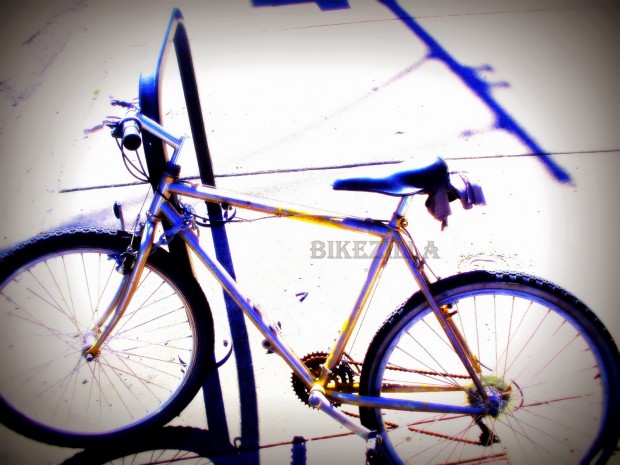