As Team Sky helicoptered through the transfer to Bonneval after the finish of stage 18 in Brive-la-Gaillarde with another Mark Cavendish sprint victory notched up, the heir-apparent to the 2012 Tour de France victory was already making plans for 2013. 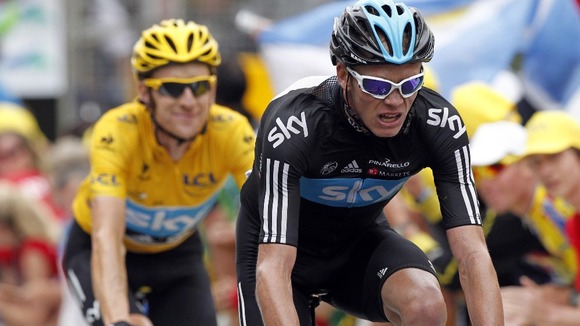 Wiggins has certainly enjoyed his red carpet ride around France, courtesy of Froome and the rest of Sky’s serfs (photo courtesy of ITV)

“I’ve always been someone who wishes to move on to new challenges. Now that I’ve conquered my first Tour de France it’s time to attempt a feat that has only been accomplished three times in the history of the Tour. I want to wear yellow from the prologue all the way to the Champs-Elysées next year,” declared Wiggins.

As an avid student of cycling history, Wiggins stumbled upon the legend of Ottavio Bottecchia – the first person to wear the yellow jersey from start to finish as winner of the 1924 Tour – via a conversation with famed Scottish cycling journalist, Richard Moore. Moore was turned on to the story of Bottecchia by Herbie Sykes over an espresso in 2006 during a very animated Giro d’Italia.

“I know that I’ve promised Chris (Froome) that he could have a shot at the Tour in 2013 and that I’d support him, but I think my goals are more important than his. After all, I’m higher on the seniority scale in GB Cycling and I don’t feel I’ve reached my peak yet,” continued Wiggins. “I think I have a chance at equalling a feat only done three times in Tour history, and one that hasn’t been accomplished since 1935.”

Team Sky boss David Brailsford confirmed his support for Wiggins in his plan for 2013.

“Considering that Brad and Fabian were the only two to wear the yellow jersey in the entire 2012 Tour, and the fact that we pretty much intimidated every single team in this race, it is distinctly possible that Brad could wear yellow from start to finish in 2013. No one can match our team strength on any stage on any day,” mused Brailsford.

“Until the rest of the peloton grows a backbone, or Contador stays out of doping troubles, cycling is Wiggins’ domain to plunder as he wishes. He rides on the front for the sprints, and otherwise sits third wheel the entire race. He is a throwback to the great Kings and Queens of England. He truly is the king of cycling, no offense to Mark Cavendish or Sir Chris Hoy,” declared Harmon.

“Wiggins could lead the race, but only if Team Sky buys Alberto Contador’s and Andy Schleck’s contracts to sit them out of the Tour de France for the rest of their careers, or have them ride the front in support of Wiggins like they forced Froome to do this year. It’s what Hinault did, and also wanted to do to me back in the 80s,” stated LeMond.

“We’ll start with the Vuelta and the Olympics, and see what happens from there. Anything is possible for 2013,” said a muted Froome.

Stage 19 is Saturday, which should be the 53.5 km time trial coronation of Wiggins into his role as King of the Tour de France.