Who inspires Lance Armstrong? The answer may surprise you… 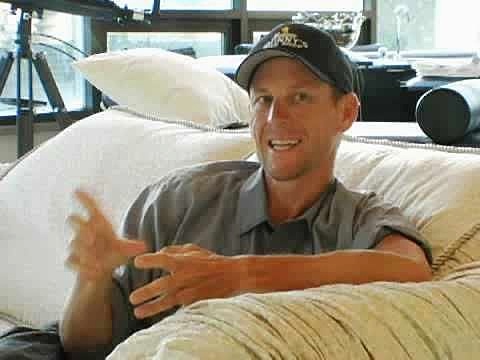 Features editor Claudia C. Pucci managed to get a few quiet words with the famous Texan between meetings with his lawyers last week. In our fabulously “soft” interview style (although not quite as fawning as Phil and Paul), we decided to cut through the controversies, get down on the comfy sofas with a nice hot cup of cocoa, and find out just who inspires the seven-time champ…

Claudia:  So Lance, how are you today?

Lance:  I’m very well, Claudia. First off, I have to say thanks for having me over to chill out on your sofa here at the Cyclismas offices. It’s always a pleasure and you’ve always been so kind to me.

Claudia:  Well it’s a pleasure to have you Lance. So lately we’ve been thinking a lot about role models here at Cyclismas. Do you have any? Did you have any when you were younger?

Lance: OK then, so long as you promise not to laugh. Ever since I was a young kid I always tried to be a bit like Terminator; he was my first role model if I think about it. I used to watch his films all the time; even before I was allowed to (they were R-rated movies, after all!). I liked him because he was always on a mission and never gave up, he was really strong and nothing fazed him. I like to think I’ve taken on those qualities over the years and transferred them to my bicycle racing.

He had these crazy powers of recovery, every time he got injured or blown up he would come back in double-quick time, it was unnatural! Also, he was really focused; he just simply would not stop until he had destroyed his victims. Obviously I don’t pursue victims, Claudia, I pursue success and cycling excellence instead!

He remains a real hero of mine, a legend of his time. In fact, if it wasn’t for The Terminator I’m sure I wouldn’t have won all of those Tours de France. He gave me real belief in myself, he was an example to me. Knowing that he could achieve anything he set his mind to is what flicked the switch inside of me to turn me from just a talent into a champion.

It’s such a shame that he killed himself at the end of Terminator 2: Judgement Day so that his technology couldn’t be used to accelerate the war against the machines.

Lance:  I mean, I have so much to thank the T-800 cyborg for, and now he’s gone. The way he protected Sarah Connor from those more advanced cyborgs in the finale of Judgement Day was exemplary.  Also it was heroic how he was able to continue fighting despite Kyle blowing him up with a pipe bomb in The Terminator. Even though he only had one arm left and no legs he still continued his mission of death and destruction. I felt exactly like that after crashing in the 2003 tour. Terminator helped me win the 2003 tour.

Claudia:  You do know the Terminator isn’t real don’t you? He’s played by Arnold Schwarzenegger.

Lance:  You’re joking, you mean that weird Australian governor of California or whatever? He’s the one that’s twinned to Danny de Vito, right? I enjoyed Kindergarten Cop but he isn’t my role model. Terminator is someone else.

[Lance looked visibly shaken at this point, so we popped a couple more marshmallows in his cocoa and waited for him to settle down again…]

Claudia:  Sorry Lance, Terminator isn’t real. Everything was fake, you were just watching a performance the whole time. It was just acting. I thought you knew, I didn’t want to upset you…

Lance:  I refuse to believe this. My entire outlook on life, all my success, everything is based on The Terminator being a real person. How can I be inspired by a fake?

Claudia:  Does it matter that it’s just a story? You still managed to win those races yourself in real life, right? Fake or not he influenced you anyway.

Claudia:  Ummm, with all due respect he really is just a character in a film, you can look it up on imdb.com if you want…

Lance:  Oh the Internet? Nothing on the Internet is true, imdb is just part of the conspiracy.

Claudia:  But if you go on YouTube, there are probably interviews with Schwarzenneger about him playing the role of Terminator…

Lance:  There was no “role” of Terminator, and YouTube videos prove nothing. Terminator was real and he defeated Skynet. You should be grateful, and all you can do is call him an imposter. You should be ashamed of yourself. YOU ARE ALIVE TODAY BECAUSE OF TERMINATOR AND YOU TREAT HIM LIKE HE’S A FAKE? YOU DISGUST ME.

[At this point we decided to end the interview. Lance did finish his hot chocolate, though, so I think we’re good for next time.]