What the Armstrong doping charges mean to the sport of cycling

The past week has proved to be an interesting one with the leak to the media of USADA letters indicating that organisation’s intention to pursue an investigation that will no doubt lead to the stripping of Lance Armstrong’s seven Tour titles, a fine, and what I’m sure will be revealed as a long-term if not lifetime ban from competition.

As I discussed with @festinagirl and @velocast yesterday on the Velocast podcast (you can listen here), there is more to this story than just Lance. Even though Lance wishes this to be all about him, as @festinagirl so eloquently said yesterday, this is more about Lance the team owner and his part in an organised doping conspiracy.

However, if you think this is solely the domain of U.S. Postal cycling team, or Johan Bruyneel’s alleged involvement along with the other four conspirators, you are sorely naïve. This Lance business will expose just how sophisticated doping protocols have become since 1992, and how they continue to be sophisticated to this day. The worst part in all of this is the reaction by many of those who are supposed to be protecting the integrity of the sport overall.

The Belgian cycling federation has chosen to remain tight-lipped, waiting to see which way the wind blows. The fact that USA Cycling released the list of athletes who specifically removed themselves from Olympic team consideration does demonstrate the pull Armstrong still has in the organisation.  How about the UCI? How can the governing body of the sport, which patted itself on the back merely days before about the success of the biological passport, come out with a cryptic and tight-lipped press release on the Armstrong business?

The trouble is all these organisations have fallen prey to the seduction of becoming marketing and PR organisations to promote the sport, instead of staying true to their real function of providing administration and support for those who wish to pursue cycling in a competitive manner. When you have a Federation or a governing body trying to run races themselves or grow the sport themselves, it puts them in the dangerous predicament of being a “fox in charge of the hen-house.” If you happen to have the wrong people at the top level making the decisions, the aims of the organisation can be perverted for less magnanimous ideals. 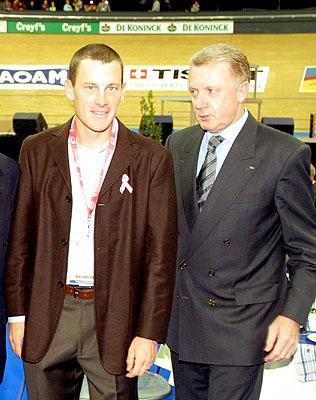 The superstar and the boss, Lance Armstrong and Hein Verbruggen, former president of the UCI (Photo © Mike Gladu courtesy Cyclingnews)

Is it a coincidence Hein Verbruggen’s rise to the top level in the sport coincided with an era rife with doping challenges?

Many people who are new to the sport of cycling comment on how incestuous the sport really is. Non-profit governing bodies creating private for-profit entities to grow the sport, something that used to be called “misappropriation of funds” in criminal court circles, have been blissfully ignored by the Swiss Parliament, or the criminal investigation units of a particular nation. Journalists participate in blatant public relations campaigns through the guise of their employers, or are blatantly paid by cycling related entities as independent contractors to provide sales or marketing or PR opportunities. These same journalists are expected to remain neutral or report on the negative aspects of the sport. We see the fruits of this now.

Cycling lacks a clear chain of command, and a clear channel of communication. Pat McQuaid speaks directly to athletes. Members of labs have met directly with team managers. Team owners meet directly with race organisers. The governing body decides to wear a race organiser hat. Journalist work directly for members of the pro peloton.  The tough part is that we also rely on all of these individuals to hold themselves accountable and resist the temptation to pervert their position for profit.

This brings us back to Armstrong.

The Armstrong case demonstrates to us just how deep the involvment from all parties truly is. The UCI was involved directly with Lance, which is why they are so tight-lipped at the moment. They have no idea who the witnesses are, or how they could implicate the UCI in the investigation. The same could be said for USA Cycling in many respects. Even the ASO may not be above reproach in this situation. This is a prime example of why the lack of rules, the lack of leadership, and the lack of direction from those who are “in charge” of the sport can become exploited by someone who can potentially increase their respective revenue streams.

It’s hard to hold them all accountable for their actions, as the relationships are murky at best. The trouble with murky lines of communication and responsibility is that it allows for those with less than honourable intentions to operate. Hence why doping doctors are still in the sport. Hence why dodgy team managers are still involved in the sport. Hence why athlete managers or “coaches” are allowed to be part of star riders’ entourages. Hence why federation and governing body directors and managers are involved directly in cycling for-profit ventures.

Cycling needs an entire clean-up from top to bottom. Cycling needs a UCI president who says enough is enough, and passes legislation to create clear channels of communication between the governing body, federations, team owners, teams, riders, manufacturers, media, and the fans. Setting the table properly removes the spectre of potentially dubious activity, and could create the transparency we all crave.

AIGCP should be negotiating contract terms with a riders’ union. This should be approved and ratified by the UCI. It shouldn’t be up to the UCI to mandate from the top down; the UCI should merely be the balance to check the relationship. The UCI should ensure teams are treated fairly by race organisers, and that race organisers follow proper protocol, not necessarily dictate who appears where. The UCI should be helping national federations grow their cycling programmes by providing expertise in conjunction with for-profit race organisers, not organising races themselves.

More importantly, they should be supporting each nation’s anti-doping programmes in spite of what may possibly be an embarrassing public relations event for the sport.  The statements from those at the top of all influential organisations should be different. Based on the reaction from both USA Cycling and the UCI to the impending Armstrong situation, is it any wonder folks feel less than comfortable in coming clean on what truly happens behind closed doors in our sport, and feel the need to talk to “semi-anonymous trolls,” “nom de plume idiots” and Twitter personalities to clear their conscience rather than speak directly with those involved in overseeing the sport?

No wonder at all.