What is my trouble with a Team Sky Tour de France victory?

A portion of my real life career has taken me to Fortune 500 board rooms and the halls of higher levels of government to assist in the determination of why private enterprises aren’t successful, or why, despite a massive influx of cash, government programmes end up in the rubbish bin.

Inevitably, the root of the problem is having the wrong people in the wrong positions, and then having those people compound the problem by doing the wrong thing. It’s not unusual to discover a CFO who would rather be a CIO, or a sales manager who is better suited to an operations position, or finding an accountant as a marketing manager who wants to break everything into a numbers equation.

However, the biggest failing is that most refuse to deal with the “right reasons” part of the equation.

You see, the “right reason” for achieving a goal can make having the wrong people at the wrong time doing the wrong things almost forgivable. If the reason is valid, the public will forgive the other parts. We see this in cycling with the Lance effect. His cancer-awareness campaign has given his fans a reason to forgive his other transgressions.

This brings me to Team Sky.

It’s great that there is going to be a (knock on MyKnoaky) British Tour de France champion. Sure it’s great for England, and yes people in England should be proud that one of their own has won the most talked-about cycling event on the calendar. Should it be the overarching mission statement for a supposedly for-profit professional cycling venture?

If the Tour de France were being contested by trade teams run by every other national federation, with sponsor dollars brought in to offset the cost of operation, then sure, there would be zero issue with how Team Sky has run their PR campaign. But that’s not the case, is it? Furthermore, isn’t that what Olympic cycling is for, and what the World Championships are for? But it shouldn’t be what the rest of the cycling calendar is about.

One of the uglier side effects of this rampant nationalism was the Twitter backlash today against anyone in the United Kingdom who questioned the logic and validity of Team Sky’s tactics following Valverde’s victory on the Peyrousorde. Both @sofaboy and @velocast were on the receiving end of some particularly venomous “you can’t question this, and if you do you’re anti-British” messages from folks they normally have pleasant exchanges with.

Other flag-waving types say that a Brad Wiggins/British victory is vital for providing a boost to cycling in the United Kingdom, that a Tour de France victory means that there will be more SkyRides, which are important and necessary for achieving a victory for the British cycling grassroots movement, and then the United Kingdom will be the greatest cycling nation on the planet and now we’ll feel better about ourselves and about our sport and about our national identity.

If there was ever a “wrong reason” for a Tour de France victory, this is it. And the worst part is that this behaviour is being perpetuated by the pro “Believe in Britain” journalists, along with David Brailsford, Brad Wiggins, and the Team Sky marketing brain-trust. Why should the fact that this team is British be front and centre as the end-all be-all?

As a prime example, take Canadian Ryder Hesjedal. Hesjedal was the first Canadian winner of a Grand Tour. He is a proud Canadian who displayed a hockey stick with a Canadian flag on the podium in Milan. And then, that was it. Was there a giant marketing campaign of “Believe in Canada?” No. In fact, Hesjedal didn’t even go home to Canada, because he had a job to do, because he rides for a trade team based in the U.S. with a roster comprised of a multitude of nationalities attempting to achieve a variety of goals in cycling. Winning Grand Tours. Winning Classics. Placing team members in strategic locations in order to draw attention to sponsors who have chosen to believe in a particular venture.

That’s the point of professional cycling. Nationality isn’t the “right reason” for a Tour de France victory, it is merely a small component of a greater mission, a mission of nine gentlemen from a variety of experiences and locations overcoming their own personal feelings and agendas to achieve their own “right reason” at the Tour, whatever that “right reason” might be for a commercial venture that is supposed to generate a profit.

How do you think Edvald Boassen-Hagen feels about a “British” Tour de France victory? How about Richie Porte? Or Mick Rogers? Do you think they care about a British victory?  No. But they do care about the fact their teammate, a guy they supported for over 3,496.9 km, achieved the team’s goal of winning the Tour. To say this is a victory for “British” cycling is to diminish their contributions. 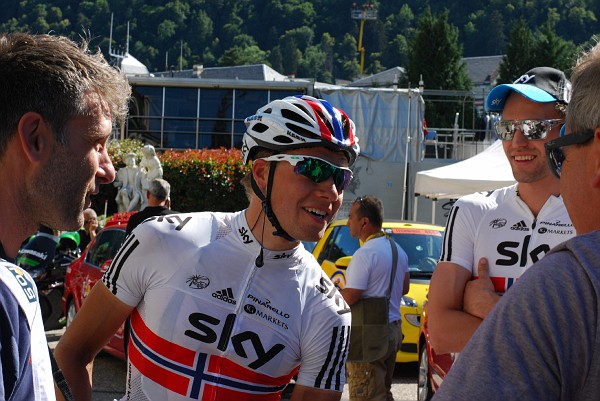 The Norwegian road racing champion of the world, who happens to be on this so-called British team (photo by Dana Gardner/DailyPeloton.com)

But the worst part of the equation is the downside of having the “wrong reason.” GB Cycling and BSkyB have wrapped themselves in the Union Jack for financial gain and greater dominance in the UK Cycling market, and to leverage that success for greater worldwide gain. What happens if – heaven forbid – Brad Wiggins tests positive down the road for PEDs? What happens if members of the Team Sky braintrust are popped for corruption, or collusion, or illegal banking? What happens to the nationalistic cycling disciples then? What happens to their feelings? Would they feel betrayed?

Sometimes it’s better to keep your reasons for victory more reasonable and less lofty. It allows room for the grassroots to believe in cycling for cycling’s sake. Not because you happen to hold a British passport.

After all, Bradley Wiggins grew up idolizing a Spaniard.