With former president Hein Verbruggen at his side, UCI president Pat McQuaid declared today they were jointly filing a lawsuit against the New York Times newspaper and Jonathan Vaughters for “damaging the image of cycling and sullying the reputation of the UCI.” 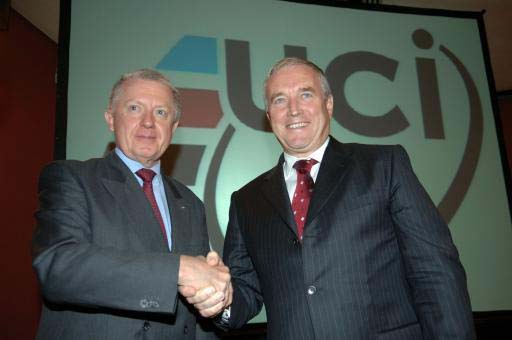 The press conference, held at the mountain biking venue at the London Olympics and occuring during the men’s MTB race on the final day of the Olympics, comes after a tough two weeks for the current and past presidents of the UCI with charges of collusion and corruption coming from WADA and USADA in the Armstrong case.  The latest controversy arrived after Garmin-Sharp-Barracuda CEO Jonathan Vaughters admitted in the New York Times that he doped during Verbruggen’s reign as president.

“We will not let this attack against the good name of cycling stand,” declared McQuaid, “We have ruled cycling with an iron fist and defended our interests in the sport with unwavering authoritarian democracy. We have filed lawsuits against many, many, many, many others and Jonathan Vaughters statements will not go unpunished.”

McQuaid arrived at the decision of having the UCI sue both the New York Times and Vaughters after taking twenty phone calls from Verbruggen early Sunday morning in London, followed by a thumping at the door of his London penthouse, just after breakfast, from Verbruggen.

“Hein was the best UCI president we have ever had. He took road cycling from obscurity to being one of the best and most well-known sporting pursuits in the world. Road cycling is our entire focus of the UCI. Road cycling is what pays our bills at the UCI. We need to protect the integrity of road cycling in order to preserve the cycling brand overall and worldwide,” continued McQuaid as Verbruggen whispered in his ear.

When asked about the timing of the piece in the newspaper Verbruggen was candid, while McQuaid retired briefly to change from his clean shirt into another clean shirt retrieved for him by one of the Olympic volunteers.

“Vaughters has obviously come under the EVIL influence of USADA mafia don Travis Tygart and that man with no conscience David Howman who apparently runs the WADA people. These are all men who are conspiring to take away what we have tirelessly built.  Vaughters has embraced an anti-cycling agenda. He has joined those who have campaigned against cycling for the past fifteen years. I will NOT accept this attack,” asserted a visibly animated Verbruggen.

McQuaid revealed the lawsuit would be filed in Swiss court Monday or Tuesday, once he was done counting the Olympic money.

VeloNews editor-in-chief Neal Rogers, who attended the press conference and was rather stunned by the announcement, had this to say:

“It seems the only opinion that is allowed in cycling is either Verbruggen’s or McQuaid’s. Or maybe opinions they’ve approved. Glad to see that Enrico [UCI spokesperson Enrico Carpani] didn’t have to go searching for a desk chair after the lounge chair debacle from the other presser,” stated Rogers, alluding to the McQuaid press conference where the Irishman attacked the charges by USADA and WADA against himself and the UCI.

Eurosport pundit David Harmon weighed in with his thoughts on the situation.

“For an organisation and men who are preaching anti-doping messages, it is interesting that the choice of action is to attack, deny, and sue. This should cause the cycling public to pause and reflect,” concluded Harmon.

Vaughters, when reached for comment, had a short statement.

“This is only the beginning. If I were Hein and Pat, I’d be looking for an exit strategy rather than filing lawsuits,” declared Vaughters.

When reached for comment, the New York Times legal team had this response,

It remains to be seen if Vaughters’ admission is timed to coincide with the additional evidence requested by Judge Sparks in the Armstrong case. Vaughters refused to comment if he would respond to the lawsuit, preferring to wait and see if he was actually going to be served, as many alleged lawsuits by McQuaid and Verbruggen have never come to fruition.