After multiple news outlets released the information of the UCI’s judgement granted by a Swiss court against Floyd Landis, the UCI also revealed additional words the Swiss judge rejected for inclusion as part of the “Landis Verboten List.” 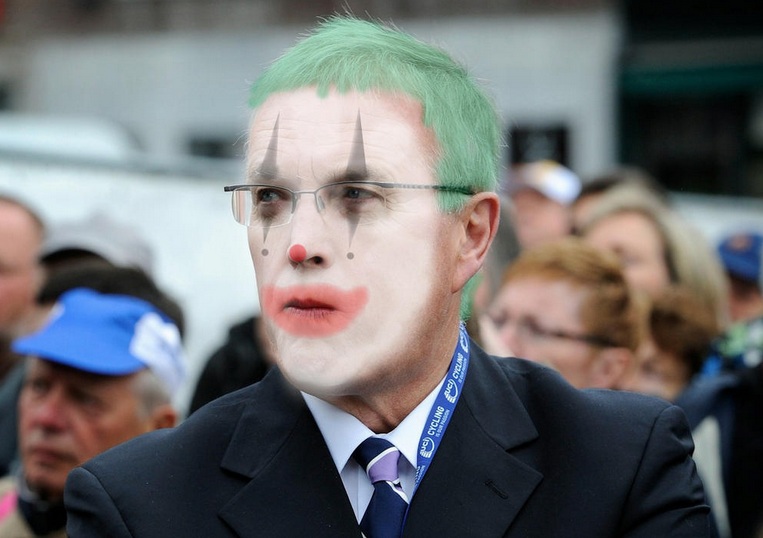 McQuaid dons the clown face paint to taunt Landis after Swiss Courts side with the UCI. (photo manipulation courtesy of @kiss_my_panache)

The UCI filed suit against Floyd Landis in April of 2011, but as noted by Hein Verbruggen they had trouble locating Landis. This was partly due to the stealth technology employed by Landis courtesy of CERN, and also due to the fact the UCI doesn’t acknowledge bloggers nor bloggers’ domiciles, as Landis has been frequenting the semi-secret location of the blogging website nyvelocity.com

The approved list, as revealed by the UCI merely hours ago, included the following as noted by the decision from the Vaud court:

II. forbids Floyd Landis to state that the Union Cycliste Internationale, Patrick (Pat) McQuaid and/or Henricus (Hein) Verbruggen have concealed cases of doping, received money for doing so, have accepted money from Lance Armstrong to conceal a doping case, have protected certain racing cyclists, concealed cases of doping, have engaged in manipulation, particularly of tests and races, have hesitated and delayed publishing the results of a positive test on Alberto Contador, have accepted bribes, are corrupt, are terrorists, have no regard for the rules, load the dice, are fools, do not have a genuine desire to restore discipline to cycling, are full of shit, are clowns, their words are worthless, are liars, are no different to Colonel Muammar Gaddafi, or to make any similar other allegations of that kind

However, as noted by the second press release from the UCI, the judge did not approve the following phrases for inclusion, partly due to the nature of the alleged phrases and the probability of their occurence. The court also noted the improbability of Landis uttering these words to anyone in cycling as they actually might be true. The phrases are as follows:

conducted illegal transfers of funds to the GCP, acquired UCI funds to proceed in lawsuits of a personal nature, referred to cycling fans as “nom de plume idiots” in multiple emails, engaged in inflammatory proceedings against USADA and WADA, used UCI budget for personal wardrobe purchases, used UCI funds for personal holiday ventures, receiving a home and a significant salary still unrevealed to the UCI management committee as compensation as president, browbeating sponsors to ensure WorldTour teams attended Beijing, threatening journalists with blacklisting if potentially negative stories about them were released, leaking information to the press to benefit personally, removing popular events in lieu of events that line their pockets like the individual pursuit, bending WorldTour rules to ensure teams stay in even though the deadline passed like Saxo and RadioShack, hiring family members and friends to key races and key championship bids, illogical appeals of decisions, illogical non-appeals of decisions.

Additionally, the judge also refused to include the following words and phrases as the court determined Landis would never go as far as utter the following:

fucking gangsters, enforcers of cycling’s mafia omerta, nepotistic fucking douchebags, fucking shitbags, complete and total assclowns, in Armstrong’s pocket, payola kings, crime lords of cycling, vampire money suckers, drunk Irish pig, phat Pat, kiss my Heinie Hein, Dickus Henricus, bending over cycling, I hope Kimmage fucks them up in his court case, Weisel’s minions, how much money did Hein get for Keirin anyhow?, McQuaid’s lips are firmly planted on the ass of the IOC, Darth Vader and Emperor Palpatine are pussies compared to Pat and Hein, Pat and Hein are a fucking embarrassment to cycling. period., are dirty liars, are no better than Attila the Hun or Napolean or Saddam Hussein or Kim Jong Il or Manuel Noriega.

As of press time, there was still no reason given by the UCI on why they haven’t filed a lawsuit against Tyler Hamilton, as his accusations mirror many of the same that have been uttered by Landis.

No word on how this judgement will affect the outcome of the current Kimmage action, where the journalist will actually be fighting the UCI on their turf.