The cycling world went from dread, to elation, and back to dread after the UCI fired off a series of press releases, Uzi-style, ultimately dashing the hopes of cycling fans around the world who were hoping for real reform at the UCI. 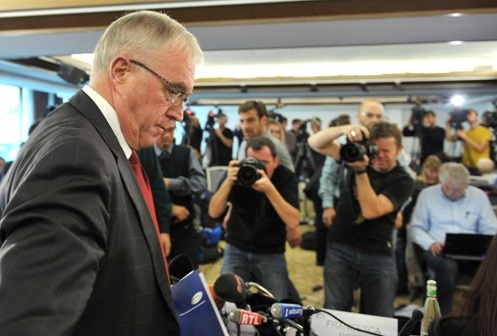 The UCI issued three press releases in rapid-fire succession, beginning with the announcement of Australian Olympic head John Coates heading up the mission to choose the independent panel, followed by the announcement of a “stakeholder consultation,” and finally who would be “the stakeholders” determining the future of the sport.

“We’ve been happy to partner with our old friend, John Coates, who has a history of making unpopular decisions. He was the man who said Australia should still go to Moscow for the Olympics there, he was also the gent who was involved in the Beijing bribery scandal in 1993. Recently, we’ve been happy with his zero tolerance stance, which has been his attempt to get Klaus Mueller [Cycling Australia president] back in line,” commented UCI president Pat McQuaid.

It’s been stated that the commission will have a lawyer, an accountant, and a sports administrator who will not have involvement in the cycling world.

“They will have no involvement in the cycling world. We didn’t say that they wouldn’t have close ties to us in some form or fashion, though. And frankly, we have to have people in these positions that we know we can trust to make the right decisions in our favour,” continued McQuaid.

The second press release outlined the UCI’s wish to “move the sport forward” with a consultation process involving “all stakeholders,” with details to follow at the end of the year, and the panel to begin work in 2013. However, mere minutes after the second press release, a third was issued from Enrico Carpani, UCI spokesperson, via email, outlining the composition of the “stakeholder panel.”

“After conversations with our honorary president, the UCI has determined the composition of the stakeholder panel based upon their selfless commitment to the sport of cycling and their collective vision,” declared the press release.

UCI spokesperson Carpani was quick to defend the selections for the stakeholder panel in his press release.

“The UCI feels this group will represent the different factions who have a vested interest in the sport. We are pleased with the inclusion of John Wilcockson, who will respresent the rabid fan base which has expressed their concerns about the sport in general. Igor Makarov will address any concerns on behalf of the teams. Gianni Bugno has shown his ability to represent the riders well. Alain Rumpf, Mike Turtur, and Alan Rushton will ensure the voice of race organisers are heard as well,” stated the press release.

The press release also outlined how the entire exercise will be paid for, as revenue is a top concern for the organization in general.

“We will be utilizing the reserves from the Pro Tour Fund to offset the expenses related to the independent commission and the stakeholder panel. We would like to thank the World Tour teams for their invaluable contribution to the sport,” the press release concluded.

Vocal UCI critic and AIGCP president Jonathan Vaughters had a terse response to the developments, “It’s business as usual.”

The UCI will be revealing futher details of both exercises sometime in January.