After a string of disappointing sprint finishes to start his 2012 season, Team Garmin-Barracuda’s designated fourth-place finisher Tyler Farrar held a press conference in Martinsicuro after completion of stage four of Tirreno-Adriatico to notify the media of his suspension from competition as mandated by the UCI-imposed morality clause. 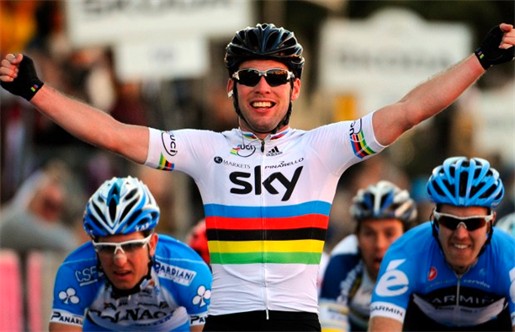 Farrar just prior to launching a profanity-laden tirade upon losing to Cav yet again (Photo: hbvl.be)

“I received notification that my conduct following stage two and stage three violated my UCI-imposed post-stage morality contract clauses agreed to after my Tour of Qatar verbal barrage. WorldTour coordinator Jarvier Barrio served me verbally and via a written UCI injunction shortly after yesterday’s stage of the requirement to spend time away from cycling competition to address these issues,” an uncharacteristically reserved Farrar stated at the press conference.

The UCI, fed up with the profanity-laced finishes at which Farrar excels, made the verdict during a review of Farrar’s Tirreno conduct at an emergency UCI management committee conference call late Friday.

“We are a professional organisation that requires the utmost respect for the fans and the viewers around the world. Farrar’s verbal assaults may be the result of an undiagnosed Tourettes Syndrome, but his medical history is not our problem. However, due to his immense talent – no matter how misused by Jonathan Vaughters – we feel that two months in Aigle attending our Pro Peloton Public Relations Training Course, along with the UCI Anger Management class, will go a long way towards rehabilitating this fine young man,” stated Barrio.

Farrar, for his faults, seemed tranquil and at peace with the decision.

“I think this just may be the time that I need to figure out exactly what kind of pro cyclist I want to be. I’m going to stop listening to those who want me to be something I’m not. I have to thank Nicolas Roche for coming forward and stating in a Eurosport UK interview that he’s really a stage hunter masquerading as a GC contender. I think that was the wake-up call I needed to be at peace with this UCI notification,” commented Farrar.

The Team Garmin-Barracuda CEO was also surprisingly serene with the decision.

“I’m proud of Tyler. In fact, I’m even more proud that he has made the decision to give his roster spot to Franco Pellizotti. We will be inserting Pellizotti as our GC man for the Giro d’Italia effective immediately,” commented Vaughters.

When Vaughters was asked a follow-up question moments later in reference to who would be the protected rider for the classics season rather than Farrar, Vaughters replied, “Tyler who?”

RCS Sport, the organization running the race, were happy to see the UCI follow through with the threat of removal for violation of morality clauses. An unnamed source stated that Farrar’s expletives were a huge stumbling block for confirmation of additional English-language rights holders for 2013, especially in the United States, where profanity and bodily exposure are met with huge restrictions.

After a long conference call between UCI president Pat McQuaid and Slipstream Sports sugar daddy Doug Ellis – brokered by Hein Verbruggen – it was agreed to let Farrar finish Tirreno-Adriatico and commence his UCI two-month rehabilitation on March 14th. There is no word whether Farrar will contest for the green jersey this July at the Tour.