Two Russians, a Belgian and an air field in Northern Italy

Viatcheslav Ekimov is a funny little guy. Not exactly funny in the way that a good stand-up comedian is. No, I was thinking more along the lines of funny looking. I freely admit to never having studied the sexual habits of African mammals, but whenever I see Viatcheslav grinning, I can’t help but imagine that this would be what a meerkat would look like during orgasm. 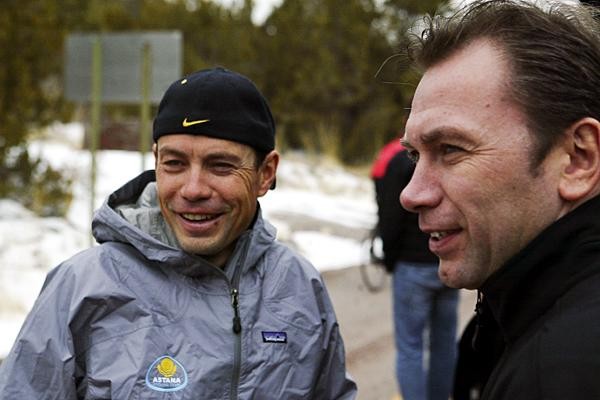 ‘Eki,’ as he was known around the professional peloton, is smiling at the moment. He beams at me as we greet each other in the grand, Art Nouveau lobby of Moscow’s Metropol Hotel. Meeting here, in this gaudy, 5-star bauble of a place was Ekimov’s idea. He’s obviously keen to show off his new-found status. I was tempted to insist on something less salubrious, but he said he’d pay and I remembered that the Bolshoi was just across the road (memories of a lovely wardrobe mistress called Helena had me itching to see if she still worked there). Dressed head-to-toe in black Armani, Ekimov now more resembles the owner of a high-class escort agency than a retired road cyclist, but that could be because I’ve spent too much time (not to mention my expense account) on high-class escorts. A chunky Rolex, hefty as a manacle, slides into view from beneath his cuff as he extends an arm to show me the way to the Shalyapin bar. We say nothing as we walk to a table but Eki flashes that orgasm face once more as we sit, asking me how I’m doing and calls me an old scoundrel. Scoundrel? Ha! That’s rich.

Pleasantries over and vodkas ordered, he starts to tell me about his new position and why he felt it was important to leave his current one with Radioshack.

“It was an offer I couldn’t refuse, Winston,” he tells me. I ask him if he meant literally couldn’t refuse the offer and for a moment he eyes me warily before the joke sinks in and the rutting meerkat face is back. He explains that he has been invited to become professional sports advisor to Igor Makarov, the founder and head of the Russian Global Cycling Project and president of the Russian Cycling Federation.

“So, you’re on speaking terms with Makarov again, Eki?” I ask him.

I suggest there may have been some ill-will over Makarov becoming the president of the Russian Cycling Federation in 2010; a job that Ekimov himself applied for. He laughs and rolls back in the blood-red velvet chair. “No, no, Rumfoord. I know you’re just playing games with me here. Look, Makarov? He’s the president of oil and gas company ITERA. And ITERA has been involved with Russian cycling for many years. It’s the main sponsor of Team Katusha. How much more obvious can you get? So, it was a done deal. As Johan says, ‘sewn up like the kippers.’ So Makarov got elected to the position with 29 votes and I got 11. That had been planned all along. Can’t make it too obvious, though. Right?”

I put it to him that this meant he had to go back with his tail between his legs to Johan Bruyneel at Radioshack?

“Absolutely not! No, after retiring with U.S. Postal I became a directeur sportif with Discovery. I stuck with Lance and Johan when they went to Astana and we were always talking about getting someone in on the ‘inside’ and legitimizing the traffic – you know what I mean when I say ‘traffic,’ don’t you?” I say nothing and Ekimov carries on.

“We knew Makarov was always going to be the guy who would do it. He had the money, the access and the clout. I mean, we’d been dealing with him for years.” He pauses for a moment, before giggling, “Ha! Dealing. Good word. I meant business deals, but … ah, Winston, you’ve been around the block. You know the score! Did I ever tell you the story about the Italian government minister, the yacht, and the private air field? No? Hmm, remind me to tell you that one sometime.”

He composes himself again before continuing. “Anyway, we just had to make sure that we were seen as the ‘going-to guys’ – is that right?” I correct him and he goes on, “OK, the go-to guys for Igor. Being Russian myself, I was the obvious choice.”

“So you’ve just been biding your time at Radioshack?” I query.

“Yes and no,” he replies, bobbing his head from side to side. “I’ve been going back and forth between Johan and Igor. And it’s been worth it.”

“Your new appointment?” I ask him.

“Yes. Look Winston, I’m 45 now. Do you really think I want to be driving a fucking sticker-covered Nissan up an Alpine road for the rest of my life? The Russian Global Cycling Project that we’ve got going on over here includes Team Katusha, continental and youth teams Itera-Katusha, and also men’s, women’s and youth track teams. It all looks legitimate. Good for the image, no?” He takes a gulp of vodka while his eyes follow two blond women as they pass by our table. Even without the dagger-like heels they were both over 6 foot.

“Hmmm, perhaps you’re right. Where were we? OK. You read the press release, yes?”

I nod, patting the folder I have on the table in front of me. He smiles again, “And you didn’t have a laugh when it said that Marakov offered me the position as a sign of ‘understanding the necessity of attracting the highest level specialists in the Project’? It’s getting too easy this, Winston. Too easy.”

His smile breaks when I, somewhat cheekily, ask him if he’s heard anything about Radioshack-Nissan’s license application yet.

Ekimov leans across the table and lowers his voice a little, “Before I tell you about the air field in the north of Italy, can you answer a question for me?”

“What is a kipper, Winston? Johan won’t tell me.”

In all honesty, it’s the only thing that truly has surprised me all day.