The UCI issued a press release yesterday announcing that the Tour of Hangzhou was postponed until 2013 due to “… general conditions necessary to guarantee that the race would fulfil the UCI WorldTour quality criteria had been met.”

The decision was reached after the UCI came under fire for granting WorldTour status to the race that had never, never, never been run before  despite the long list of requests from other races for WorldTour status – including Strade Bianche and the Amgen Tour of California.

“Look, we make the decisions when it comes to professional cycling. We have the best eyes to see what is best for the sport overall. China is important to us for a variety of reasons, especially for Hein Verbruggen. What we do is our business, and frankly, other organisers who cry foul can stuff it,” commented UCI President Pat McQuaid. 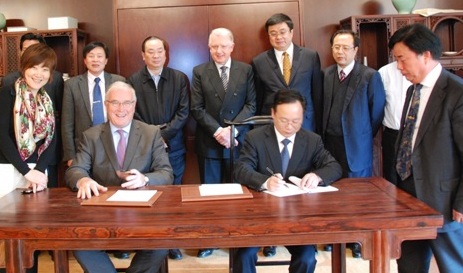 Happier times for Hangzhou as Verbruggen watches over McQuaid signing the agreement with representatives back in March of this year. No reason was ever given for Verbruggen’s appearance, but his involvement has prompted whispers of corruption.

“After all, I spent 20 years toiling in the trenches to get to this spot. I am entitled to personally profit from this sport after all the blood, sweat and tears I put into this godforsaken two-wheeled hell hole,” McQuaid continued.

When it was pointed out that decisions from the UCI should be made by the executive committee and not McQuaid exclusively, the president responded.

However, all is not rosy for the organization when it comes to the Tour of Hangzhou. As reported by Chinese media last week, as of July certain contracts for Hangzhou-based companies promised by the UCI hadn’t come through, making the government uneasy about the ability of the UCI to follow through with their commitments based upon “substantial” payments to the UCI for the WorldTour designation. The UCI refused to comment on those payments, and refused to acknowledge they existed.

“It’s none of your business,” stated McQuaid.

When asked about Global Cycling Promotion’s balance sheet and why the UCI still hasn’t presented a transparent accounting of the entity’s actions (as it is supposedly part of a not-for profit governing body with a responsibility to share its endeavours with its constituents), McQuaid was again agitated.

“It’s none of your fooking business. We’re done. Fook off,” McQuaid sputtered, hanging up the phone.

Both AIGCP boss Jonathan Vaughters and CPA boss Gianni Bugno refused to comment or speculate on the decision.

Anonymous team managers were not pleased by the cancellation news. Due to the huge expense of sending riders to China, many noted it was hardly worthwhile to send riders to the only remaining race there – the Tour of Beijing – and were pondering a boycott.

Another anonymous team manager mused that with the “imminent death of the Armstrong Cabal in Aigle,” Beijing might not even be in existence in 2013, pending the rumoured inquiries into UCI activities.