Track world cups last three days, occasionally four, the world championships last five days, and at those we have the five Olympic events plus a scratch race, individual pursuit, kilo/500 tt, men’s Madison. So why, why, oh why has the Olympic schedule taken six days! The sessions have been short, very short! I just think we could have had had it all wrapped up a bit quicker, and quite a few of the riders that I have spoken to feel the same!

So when I got to the track tonight, I saw the track manager, or at least I think that’s what he’s calling himself! I asked him what idiot decided it would be a good idea to kick Brad out the other day, he said that would be me! Well l that was an awkward moment!, anyway, we discussed it, he told me it was holding up worldwide TV pictures, I told him it wasn’t, we disagreed and walked away from each other, never liked him anyway!

So back to the bike racing, There was just one round of the sprints tonight, like I said, it all could have been wrapped up much quicker! But tonight belongs to “Red Clancy.” OK, so he had a howler in the scratch race, but Glen O’Shea far exceeded Ed’s troubles by at times looking like he had just finished the men’s triple jump, the size of the squares he was pedalling. Viviani and Coquard were head and shoulders above the rest in the Elimination, as they had been all year, but despite Clancy’s best efforts of taking out the Dane, Lasse Norman Hansen, by knocking him off he took a lap in the scratch and held his own in the Elimination, posting the fastest time in the pursuit with Clancy personal besting with a very close second it was all fairly set. The Dane held on in the kilo, Viviani went out very fast and parked in the bus stop! Coquard held his own for silver and Clancy produced a time only 2/10ths of a second outside Sir Chris Hoy’s winning time and Olympic record from Athens! With three team pursuits, and the rest of the omnium events in his legs in the last four days! Machine! 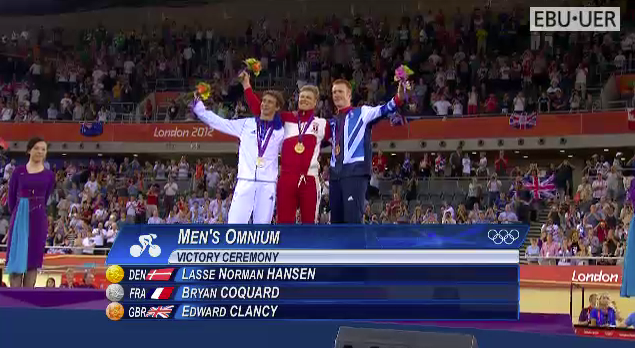 In other news, GB admit that they have round wheels without magic dust in them, the French still accuse their own national wheel sponsor and French brand Mavic of colluding with GB to have placed 17 hamsters inside each disc wheel to run furiously when needed to assist in setting world records! Oh and the hot pants have been proven to just be Mclaren F1 tyre warmers painted blue!

And in other other news, and the highlight of my games so far, through furious blagging and copious … Sod it, i’ll just admit it – I lied through my teeth and wangled my way in to the 100 metres final! My good friend Will Carling was watching, so I made some lame excuse to the purple T-shirt on the door that I just wanted to say hi to Lisa, and then managed to hot seat my way around until 21.50 and see the most popular event of the games! 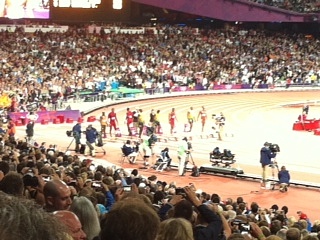 Waiting for the Bolt to crack…

Usain Bolt delivered,  but sod that, I was sat behind the queen… well Dame Helen, who was behind Steven Gerrard, and somewhat amazingly just across the stairs from the one and only Lionel Messi! 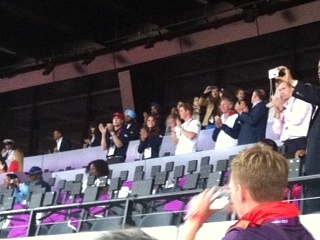 Everyone wants a snap of real royalty 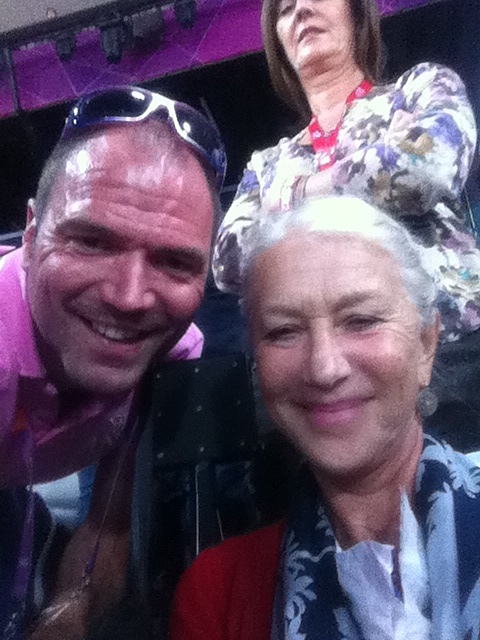 I have to admit, slightly star struck, only slightly though! Normality will resume tomorrow! Night, John boy…