So it’s the first day of track competition, and I am buzzing! It’s all hit home, I’m here, at the Olympics; it’s weird, being so close knowing all the people involved.

Anyway, all set, found our spot in a rather good position right by the finish line, had all my research done, paperwork with me so I started wandering around and saying a few hellos! Chris Boardman, Hayles, you know old mates: 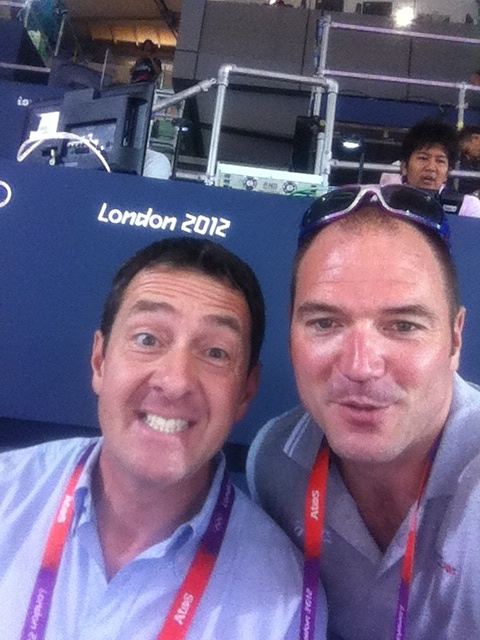 With legend Chris Boardman (taken with my iPhone) 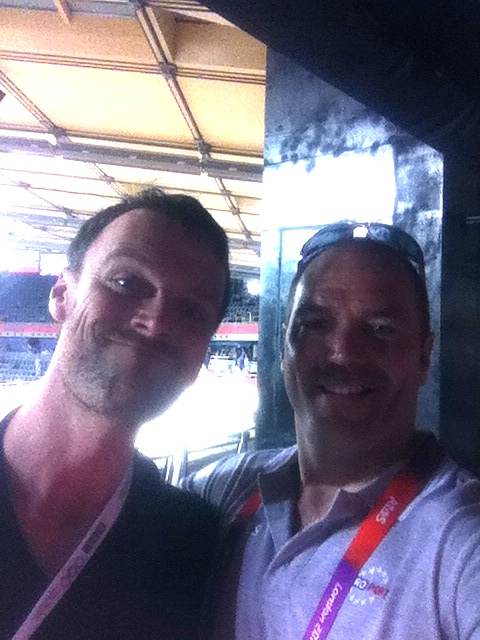 With sidekick Rob Hayles (taken with my iPhone)

Giovanni Lombardy, who is a good friend and a top top guy; Scott McGrory, who I took my one and only Six Day win with; Freddy Mange, Maurizio Fondriest, who Giovanni introduced me to, who is just such a nice down-to-earth guy and just wanted to know where and when we were going out in London, now that could end up messy! 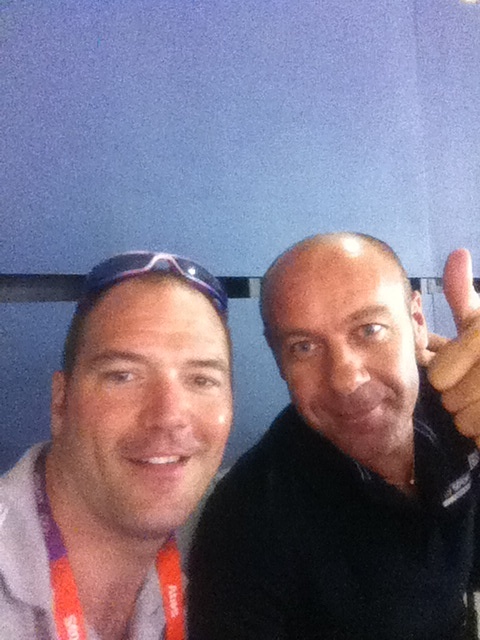 With Giovanni Lombardy (taken with my iPhone) 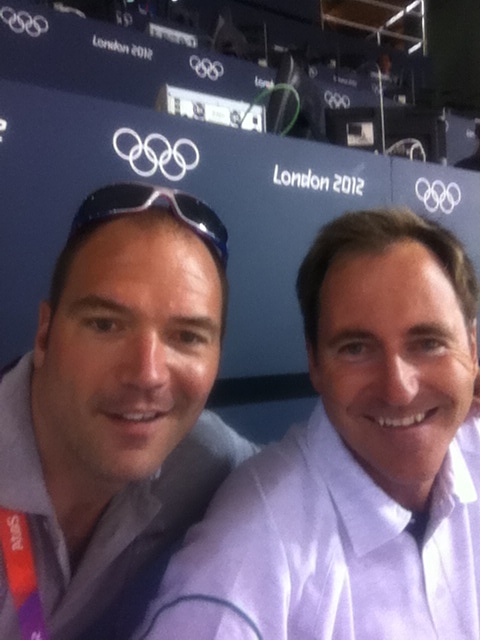 With Scott McGrory (taken with my iPhone) 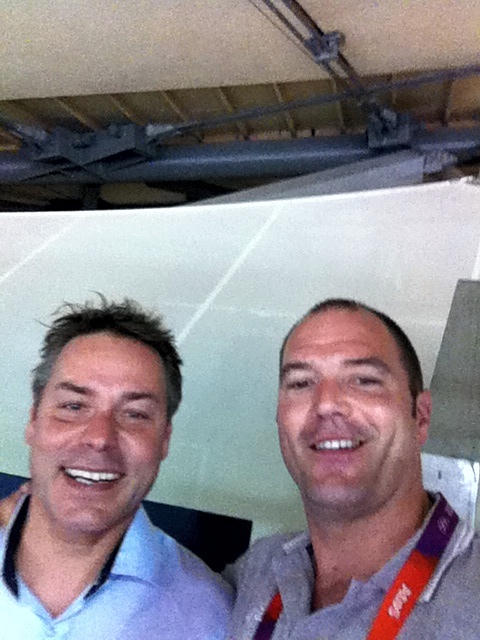 With Freddy Mange (taken with my iPhone)

So over to the track, a track is a track, it’s the people that make the atmosphere, and I have to say that the crowd here were simply stunning, applause and cheers just for GB riders warming up, and even the very first competitor in the women’s TS received a massive cheer as did every Olympic and World record regardless of nation. 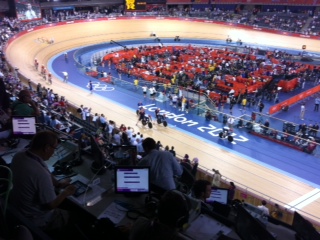 The view of the Velodrome (taken with my iPhone)

So there were three massive talking points through the evening as far as I was concerned, firstly the disqualification of the GB womens TS squad. Now concentrate here, the start/finish lines for timed events are exactly halfway along each straight, for the team sprint there is a line 15 metres before and 15 metres after the start/finish line. When one rider is completing their lap in either the men’s or women’s team sprint, they cannot come out of the sprinters’ line before the first 15 meter line and must be out of it by the second line, 15 metres after the start finish/line, this just happens to be the bush race finish line. Additionally, the front wheel of the following rider cannot overlap the back wheel of the finishing rider before the first 15 metre line, sadly for Great Britain, they fell foul of both of these rules. 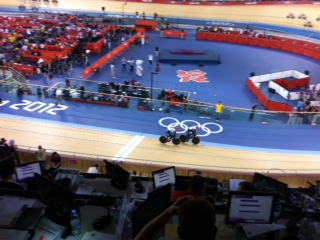 This, as you can imagine was met with boos from the crowd that you would not believe! So Jess and Vicky packed up and left, my heart goes out to Jess, it’s harsh, but that’s elite sport, the rules are the rules! It was somewhat welcomed in the women’s TS final when the Chinese team were relegated to second, after having beaten the Germans, for the same reasons. However, given that it took a good ten minutes for the judges to decide this while interviews were being given, high fives exchanged, etc. etc, by the way it still hasn’t been officially announced yet! I guess the medal ceremony was a fair pointer but a communique or announcement would have been nice! It’s fair to say the info, and distribution of it could be improved. Well Guo stormed the judged desk to such an extent that they posted three purple t-shirts on it immediately afterwards, and Daniel Morolon looked like he was going to start chopping heads off; he scared me and I was 75 meters away in the stands! Whether you or I agree or disagree, the rules are the rules and they have been implemented fairly and across the board!

So in the men’s TS, young Phil Hindes wasn’t happy with his start so he fell off! Now that’s quick thinking, proper sinister Doctor evil thinking, but quick none the less! Agree with it? No, not me, against the rules, no, against the “spirit” – well that’s for you to decide. So he dusted himself off and then with Jason Kenny and Sir Chris Hoy had a pretty faultless run through to the final where they demolished the French to take another Gold for team GB. They were just up after one lap, I think 6/100s, then I think 9/100s after two laps and then the talismanic demi god that is Sir Chris Hoy brought it home by almost a quarter of a second. Now the French had a bit of a moan and tried to get GB disqualified but that wasn’t going anywhere and I think the crowd may have rioted!

So a fantastic first day for team GB, the world record in the TP qualifier only warrants a mere mention in closing because, quite frankly, it’s going to get beaten again. The Aussies didn’t really show their full hand, I don’t think they will go fast enough to beat team GB but it may be a bit closer than qualifying looked! Needless to say I got the bus home, seven minutes walking and done!!!