Tony Gibb diaries – Day one at the Olympics

So, the track cycling competition has not even started yet and I have some great stories! Eurosport, my very kind and generous employers for this particular gig, have booked me in to the Bloomsbury Hotel! Now, without meaning to bore you with logistics, I live a one-and-a-half-hour ride from central London. I want my bike with me so I can train, but I also have my warfare bike to get up there so I can ride to and from the track, and ten days worth of luggage and kit! So I decided to drive up at 1am on Tuesday evening, having Googled the hotel and checked that I could leave my luggage and lock my warfare bike up outside the hotel, I would then drive home, sleep, and ride in the next day. The gentleman on the front desk said that he could not find my reservation but that “we have lots of reservations with no name as the Olympics are on at the moment.” Oh, I’m glad you told me, I would never have known! Anyway, after leaving my bags with him I drove around for a while not too sure that I was “sorted.”  Turns out I wasn’t, bags at wrong hotel. Sounds a doodle to sort, well try driving around London normally, then try it with most of the junctions routed towards Stratford!!!! Anyway, went home, rode in the next days to a very plush hotel, expected weird looks at the sweaty mess clip-clopping through the marble reception of swanky hotel! Nope, the woman behind reception asked me if I would like a damp towel! Ah I see, Brad has just won the time trial, cue cycling in the UK hitting the big time.

Now I know Bradley Wiggins, I’ve spent time with him socially, not so much recently but in the past, I’ve raced with him and I have interviewed him at length for Eurosport – a piece called “The Sky’s the Limit,” though you wouldn’t know it as my brilliant work was, ahem, replaced! Anyway, all I know is that he is a top bloke, if you know him and know how to take his sense of humour, he is very clever, funny, engaging and passionate! A month ago he was a British cycling great, he is now truly a global legend and he deserves all he gets, a Sir-ship is a certainty, and if he is not 2013 Sports Personality of the Year, I will personally “Jarvis Cocker” the stage!

So after catching up with the time trial, I headed over to the Olympic Park. Up until now this was just another gig, one that I felt privileged  and honoured to be doing but that was about it. Let me tell you, on my ride to the track that all changed! But more of that in a minute, my ride to the track was trouble free, very trouble free, sadly however, probably through every fault of my own I locked my bike up, having finally found my way in, and then started walking, 45 minutes later I finally found the International Broadcast Centre, the IBC, a building so vast that I am sure you could build an airbus A380 in it, and in a few months time it will be torn down. How this place in temporary is beyond me! Anyway I found it via the OBC and then the BBC BC; confusing around here it is! Anyway I think managed to find the Eurosport office, then was shown to the Accreditation Validation Centre, another 20-minute walk, after all of this I decided to head off somewhat exhausted! 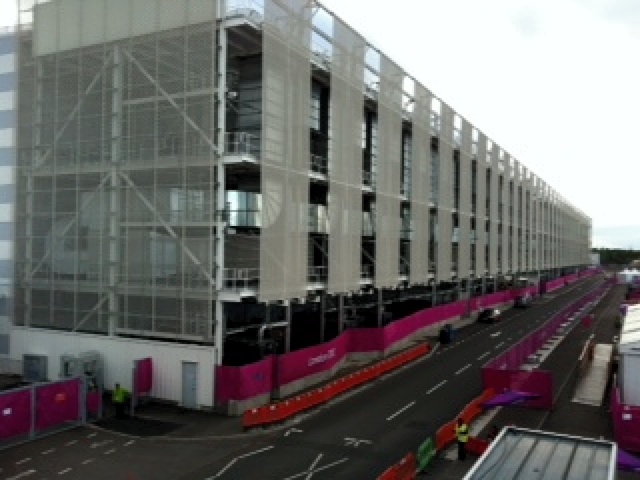 The Olympic IBC (taken with my iPhone) 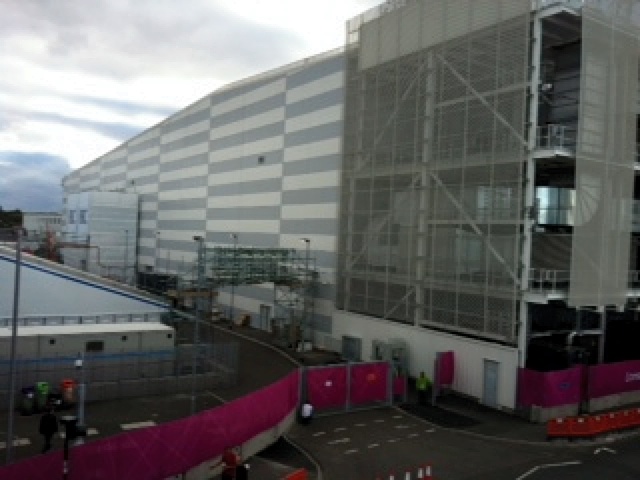 She’s huge, ain’t she? Hard to believe it’s temporary… (taken with my iPhone)

The atmosphere however is great, everyone’s happy and cheery and sociable, no one’s rushing around to get anywhere, and there’s very little traffic apart from about two miles around the park. The games lanes seem to be working very well, so well in fact that I am going to use the busses rather than ride, this also has something to do with the army stealing my deodorant! Yes they thought it was as silly as me, but then don’t ask me to tell you the story about the police dog, Mercedes vans, and not being able to buy a simple plate of chips anywhere on the Olympic Park! Well, only in one retailer, anyway! Oh and if you want to pay for said “fries” cash or Visa sir, MasterCard, er no! Amex, er no! 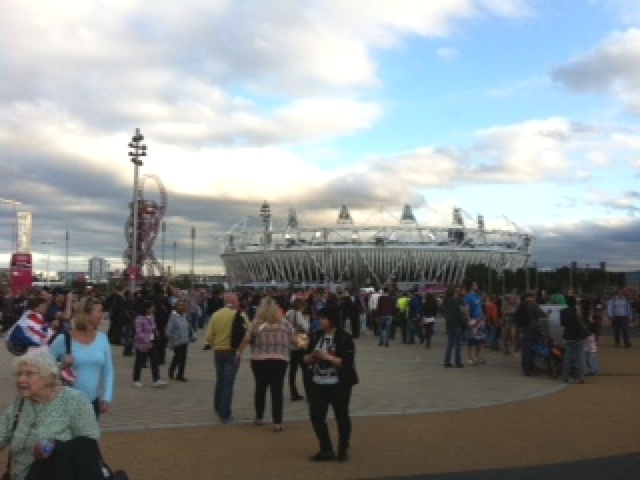 Busy then, eh? (taken with my iPhone)