The world of cycling was turned upside down last week, and I’d had enough of the bullshite spewing forth on various topics that shall remain nameless. It took up too much time, bandwidth and energy with much handwringing from the ranks of journos and pundits alike, so I skipped my best/worst rankings last week in favour of Twitter skewering. Back to our regularly-scheduled programming, and if your name is Gary Fisher, you better duck.

Worst of the Week

Yes, Lance is a great athlete. Yes he’s talented. Blah, blah, blah. It has been a long time since I’ve been so very disappointed with a key individual in cycling such as Gary Fisher. The “Godfather of Mountain Biking” was silent on Lance issues during the pending investigation, but the moment he’s declared “clean” by a skewed American “justice” system, Fisher takes to the Twitterverse to do everything short of kissing Armstrong on the mouth. Miss the Lance Love -In? Check out Fisher’s timeline during the Panama 70.3 race and the fawning over TriStrong’s exploits. Even Bill Strickland, rumoured future Armstrong book collaborator, was more even-handed with his Lance tweets. C’mon Gary, you once were an industry outsider. You even appeared on Neil Browne’s TourChats show making jokes about Lance. You can turn in your “rebel” cap and don your Wall Street “Fat Cat” Corporate suit now. You’re no longer fooling us. Best tweet on the Gary’s newest crush on Tri? Check out Lava Magazine‘s Jay Prasuhn’s take on it here. 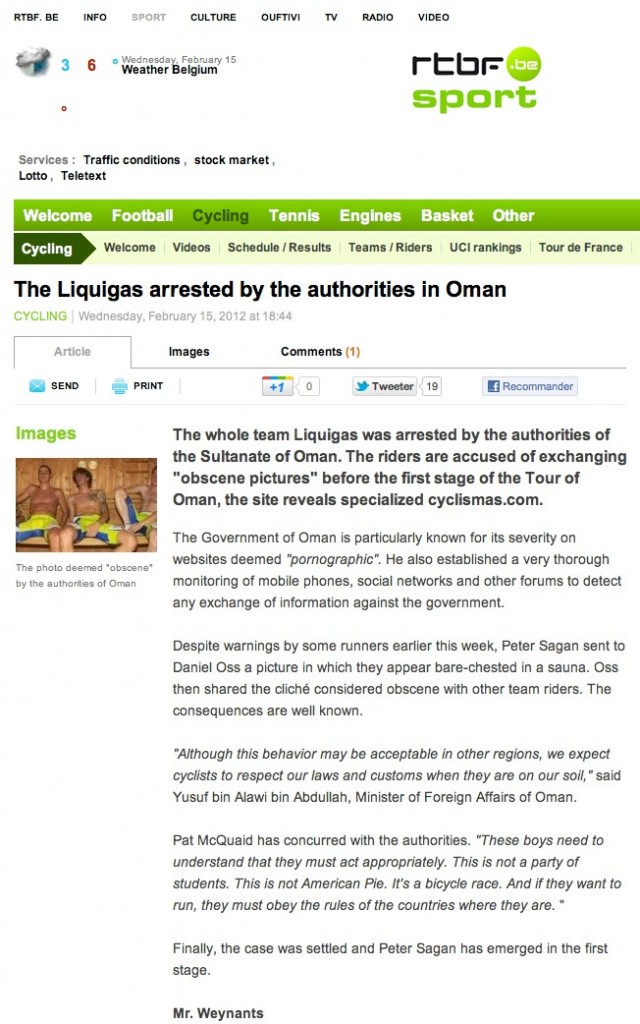 What's next for these boys, caning at dawn?

This is also one of my “Best of the Week” items, particularly because of the huge exposure it garnered for our website venture, but it sadly represents just where journalism has gone, and it’s not to the happy place.  Sigh. No phone calls to teams for a reaction. No calls to the UCI to confirm the McQuaid quotes. No emails to the Omani ambassador. Not even a follow-up for verification by colleagues or those who are familiar with our work. Why, even a quick bit of research on the photo would reveal that it was taken at the team training camp and not in Oman. I would continue, but our dear friend and sometime-collaborator Saddles perhaps summed it up best. Cheers @saddleblaze, and thank you for your two quid on the subject. And a tip of the hat to Matthew Price on his Broom Wagon blog for SBS for covering it, too. It took RTBF four days to take down the story in spite of comments and tweets alerting them to the mistake. But we screen-grabbed it for posterity. (See the original in French, below, in the Best section.)

Shows just how much the UCI cares about the riders, eh? I’m sure someone named Enrico Carpani will be blamed as per usual. I felt sorry for Cookson, hope he didn’t feel too ashamed with the whole not-allowing-the-public-to-see-Kenny-handed-the-jersey debacle. Oh right, maybe the UCI didn’t want to get booed or embarassed over “kitgate.”

Allegedly drunk and high over a multi-million dollar fine to Alberto Contador, a certain organization decides to push their luck and ban a young rider with a penchant for disorganization. Never mind the fact that the UCI was complicit in this. Nope, no sir, no sir. The organization is blameless, but refuses to have a consistent yardstick. Shocking. I’m sure Jonathan Vaughters is shaking his fist privately, and scheming how to throw a shot at the UCI during the upcoming AIGCP meeting.

Pro-cycling scribes run, swim, and bike to triathlon coverage due to Lance’s involvement

C’mon people. Lance is gone from our charts. He’s swimming, he’s running, he’s cycling. Give it a rest. Let the poor ladies of triathlon suffer the Lance-vortex effect on the poor coverage of their side of the sport. Bicycling and VeloNews, don’t you have sister publications to cover the tri-tripe?  This isn’t PRO CYCLING news. Maybe if you’d quit giving media exposure to this so-called “narcissistic sociopath” we could all have closure and move on. Thank you.

Best of the Week

RTBF picks up our Liquigas story as real

The commitment shown by the Exergy company to women’s cycling is staggering and impressive. Idaho was the scene for a great women’s race up until 2003, and it’s marvelous to see them return a high-calibre women’s event to the state. The fact that Medalist Sports was picked to oversee the operation of the race was also a smart move, as they have proved time and time again that they have the kind of cycling experience to make this a first-class event.

Another World Tour event for China?

Why is this on the Best list? Maybe now the riders, the team owners, and the federations will get together and collectively say that this sport is not being governed properly to the benefit of all. Only the few are benefitting from the moves by the top dogs in Aigle, along with their cronies. When will it stop? God might know, but he’s not saying. This latest move exposes a certain president and what drives him: Pure ego. Almost maniacal ego.

Richard Moore on the career of Jan Ullrich

Moore has captured many fans’ feelings on the Jan Ullrich affair.  Ullrich apologized for his “mistakes” without admitting overtly to any doping. Can you blame him? If you compare the reaction to Armstrong with the vilification of Ullrich, it’s hardly fair at all. Ullrich played the part of athlete. Armstrong played the role of celebrity. While both did what they felt they needed to in order to maintain their place in the peloton, I think that Ullrich’s life after cycling is more authentic, real, and human than what we have seen from Lance “Never Tested Positive” Armstrong. Hats off to Moore, who writes with panache about the collective mindset towards the one-time Tour champion that is Ullrich.

A Brit takes the Tour of the Mediterranean, and he doesn’t ride for Team Sky

Kudos to the little British outfit known as Endura for seizing the moment at the Tour of Med, after being snubbed for years by the organizers. Not only did they perform, but their lead charge, John Teirnan Locke, won the overall. Now then, there are rumblings at home over this, but we’ll leave that for another day. No, we’ll stick to the fact that Brian Smith, David Harmon, and a host of others are absolutely beside themselves that Britons are performing superbly all over the world of cycling in the lead-up to a home summer Olympic Games. Sure, there’s Cav, but the depth of coverage and victories will ensure that grassroots cycling interest won’t dry up after the Cav era ends. Soon. Yep, you heard it here first, Cav will go through the wilderness in a fashion not unlike what Boonen went through. It’s inevitable.