The speed of forgiveness

Ben Berry is a business analyst for OptumHealth and a triathlete with a passion for all things cycling. Once a fan and supporter of Lance Armstrong and LiveSTRONG, Ben is now a staunch anti-doping advocate trying to help bring about change in the sport that he loves. He writes about living a healthier life while training for endurance races on his blog, Becoming Tiberman.

A few days ago, as I was pondering some of the consequences of Lance’s confession, I had a Twitter discussion with my friend Jeff, who is both a cycling fan and theologian. I asked him about forgiveness and when it should be given. Jeff’s response was that his faith required it to be given even without being asked.

During the second half of his two-part appearance on Oprah, Lance Armstrong talked a lot about forgiveness, about being involved in a “process” to become a better person, and maybe about doing some positive things for the sport of cycling. Personally I believe him when he said he was sorry he got caught, but I’m having a little trouble believing he’s sorry for the arrogant, dishonorable, mean, and illegal things that he did throughout his career. I also have doubts that he is being 100% honest about when his doping ended, and some of his related actions with regard to the UCI. 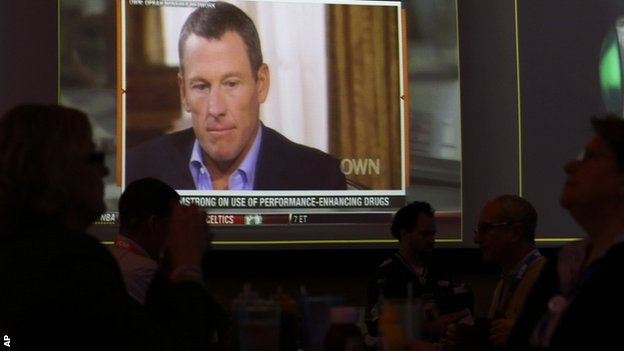 I’m not sure how we’ve reached this point in society – a seemingly never-ending parade of celebrities committing misdeeds and airing their dirty laundry so that the adoring public will continue to adore. We eat up their teary-eyed apologies, continue to support them financially by watching their movies, buying their music, or voting for them – only to be surprised when we see them making the talk show circuit just a few months later. And in a sport that’s all about speed and the next great thing to come along, it only makes sense that we’d be urged to follow the prescribed path to Lance’s quick absolution.

It’s been reported that Lance told Travis Tygart during their meeting in Denver recently that Lance believes he (Lance) is the person responsible for his own redemption. While that is true, does he understand what that means? It isn’t merely the PR crisis response plan that put him on Oprah, or even making calls apologizing to Betsy Andreu, et al, though that’s clearly a start. It has to be taking those words and putting them into action.

The faith in which I was raised teaches forgiveness, but it also requires contrition and penance for that forgiveness to be achieved. From my point of view, a solid example that Lance (and for that matter some of the other cyclists of the era who have admitted their wrongs, but have done little to actually show they are contrite) could follow would be that of Armstrong’s former teammate, Jonathan Vaughters. I believe JV has earned forgiveness for his cycling sins. He’s come clean, he’s apologized, and most importantly (whether he thinks of it this way or not), he’s done – and continues to do – his penance. It’s not just his words that say he regrets his doping past; Jonathan’s actions in how he runs Garmin-Sharp-Barracuda and his involvement in anti-doping efforts make it clear he is sincere in his remorse.

I mention all of this because I think the natural state of man is to want to forgive one another. As I watched Lance talk to Oprah, about his process and what he went through in telling his kids, as mad as I was at Lance for continuing to lie about some things (such as his PED use in 2009, which is pretty indisputable, and the timeline of his UCI donation), I found myself thinking that at some point in the future I could probably forgive Lance for what he’s done to the sport and to some people I think of as friends, so long as his words become deeds, and those deeds show he’s sincere, and he’s contrite, and he truly wants to be that better person.

At the end of our discussion, Jeff added a caveat that forgiveness and trust are two very different things. While I hope to be able to forgive Lance some day, that day is not today, and not likely to be anytime soon. And though his passion to compete was thoroughly on display in his interview with Oprah, I’m not sure I could trust him to do so without turning to his prior methods. And I think that’s where we as the cycling community can help Lance help himself and the sport we love at the same time, though probably not in a way that he will very much appreciate.

Over the next few months as Lance copes with trying to preserve his fortune and works to reduce the length of his ban, don’t be too quick to forgive, trust, or support him. As he said himself, he’s likely to “slip” from time to time, and if we truly hope to see redemption and ultimately reconciliation for the cyclists of the EPO era of cycling, quite a few things will have to change in and around the sport. Many of those things begin with or flow through Lance right now, and too quick a forgiveness will not be appreciated, and even less likely, earned. Trust given too quickly will certainly be broken, and history has shown support provided too easily will be leveraged for Lance’s personal gain.