The Overlord’s Dispatches from the Throne Volume 28

We are winning the war. The war against dopers. This victory has been a monumental achievement in my reign as the supreme Overlord of all that is cycling. 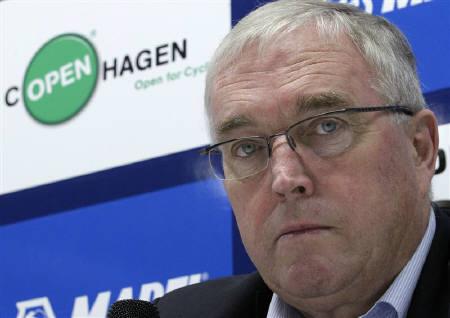 This is my throne. This is my Sport. Live from Copenhagen.

The victory against this war has been clouded this week by the fact that my brother “helped” Richmond with their winning bid for the 2015 World Championships after the attrition of Quebec City last year. Ignore the fact that Muscat dropped at the eleventh hour during an in-person meeting where we offered the moon in order to secure the winning Richmond bid. That means nothing. It’s only insolent bloggers who are over-hyping the fact that Darach played a very insignificant, and therefore, minor role in securing the bid. There was a host of individuals who were intimately involved in making Richmond happen. In fact, I might be persuaded to consider that Darach was a freeloader. Well, he’s been a freeloader since birth, but that’s for another conversation at another time. I love the little fooker. 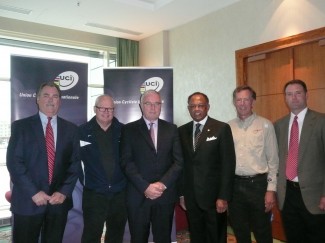 Ignore that insignificant tripe. It’s unimportant. Winning the war against doping is all that matters, for at least the next 7 days or so, or until I change my mind. Yet again.

Our efforts have made the dopers run scared. We’ve broken the ringleaders of the effort to corrupt our sport. We have rid them from the ranks of the professional peloton, we have rid them from levels of team management, we have extracted them from the support folks that act as drug mules, and we have caused the arrest of the ring of doctors who supply these parasites with their products.

Yes, it is all the work of Alexander Kolobnev.

You see, Kolobnev is the only positive test this year in the professional peloton. With well over 500 target tests that were done this year, only one rider was found to have broken the rules. Therefore, based on our logic here in Aigle, he is the ringleader of doping efforts for the entire professional peloton for 2011. We are almost certain that he acted alone. Furthermore, the fact that two former riders were found with doping paraphenelia prior to the Tour is of no consequence to cycling. There was zero proof that those products were destined for use by any cyclists of any kind. This has been borne out by the fact that everyone has dropped their inquiries into the status of the “arrests” of both “drug mules.”

With that said, our rationale of the situation calls for only one conclusion. It has to revolve around the one dirty scoundrel that we outed this year. Never mind the fact that the test was one that the AFLD completed for the Tour, and that Kolobnev hadn’t had a Passport Programme test done in the 11 months prior. He’s the one bad apple in the pie that we forked out prior to him tainting the remainder of the pie. I love apple pie. It’s rather tasty. Especially after one wicked hangover.

Our biological passport programme has rendered the numerous individuals involved in the variety of doping rings that have been operating since the late ’80s to reconsider and recant their decades of profits and tainted performances. That single decision by us in Aigle is strategically the most brilliant tool ever created by any sporting organization.  What other rational explanation can be offered up as the poster child for success? This has to be a glowing example that we are bit-by-bit winning the war against doping in cycling.

As Francesca Rossi was allowed to point out at the World Championships on Saturday during her brief appearance in public, we are doing what we now refer to as “Intelligent Testing” in conjunction with our biological passport programme. What does IT stand for? Well I think that the concept is certainly above analysis by the simple folks involved in our sport, so instead, I believe I will just state, in point form, what Intelligent Testing (or IT for short) is NOT, as implied by all the useless bloggers and conspiracy oriented media types:

Those are just a few of the many things that this programme is not.

Many high-profile “Oliver Stone” types (yes you, Gerard Vroomen), have cited the fact that we have dropped the amount of BPP (Biological Passport Programme for you dimwits) tests and have questioned why we have done this. You see, with our Index of Suspicion, one of the tools in the Intelligent Testing Umbrella Programme, we have been able to perform more target testing for those that we feel are the more dodgy part of the peloton, which in turn reduces our costs and increases our profit margin. The spectre of being tested has proven to be more than enough of a deterrent to those shifty-eyed dogs of the professional peloton to reconsider their pattern of behaviour. 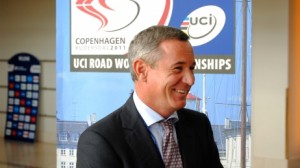 Welcome aboard, my new friend. Officially.

My week in Copenhagen was one of pure joy. It was about igniting a formerly stale cycling nation into an army of Cav Clones, jumping on their bicycles with their aero helmets and one piece skinsuits to decimate the field of a road race with a team time trial. Bradley Wiggins did a better version of Fabian Cancellara. Speaking of Cancellara, how do you like being on a Bruyneel team now, eh? Be prepared for a year of heartache, Fabian, you’ll be the loser in many more photo finishes. *chuckle*

We also were able to begin our work on the athletes commission, which is an exciting proposition, creating a new format to keep the professional peloton in check while giving them the idea that they are “involved.” I was able to express my feelings on the fact that women’s cycling isn’t developed enough at all, and don’t look at me as being the reason for it as I’m just the president of the governing body that may or may not take care of that. You see, we have many other initiatives on the go, and really, women just aren’t a priority right now. However, I did thoroughly enjoy the armada of podium gals in bright red and blonde tones. It was pure joy. 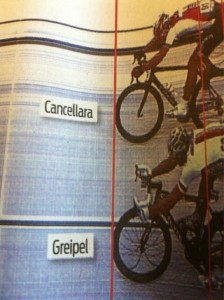 Lastly, Copenhagen saw me begin a new spirit of cooperation with the latest and greatest member of the UCI management committee, Igor Makarov. I welcome him with open arms, and a Teflon vest underneath my shirt from Harrods. Thankfully our detente has led to Tchmil publicly saying, as he did to Alberto Celani last week, that he’s NOT running for the UCI presidency, and that he’s Katusha president. Let’s just say that those profits from the reduction in BPP testing are also being reallocated to another programme related to G6 safety. Just in case.