Tummy troubles are everywhere. Everywhere. We saw Thor Hushovd starting the trend earlier this year, followed by a significant problem afflicting Marcel Kittel at the Tour de France. What about Jon Gadret? Or how about Brad Wiggins, whom @saddleblaze  rather eloquently observed in Episode 14 of @CCNN_TV was in the break at the Tour of Britain only to fall under the spell of a “sickness” that caused his exit from said race? Even the mighty Greg Henderson had to be sequestered from the Team Lotto-Belisol boys, quarantined to their body-cooling apparatus on the team bus. 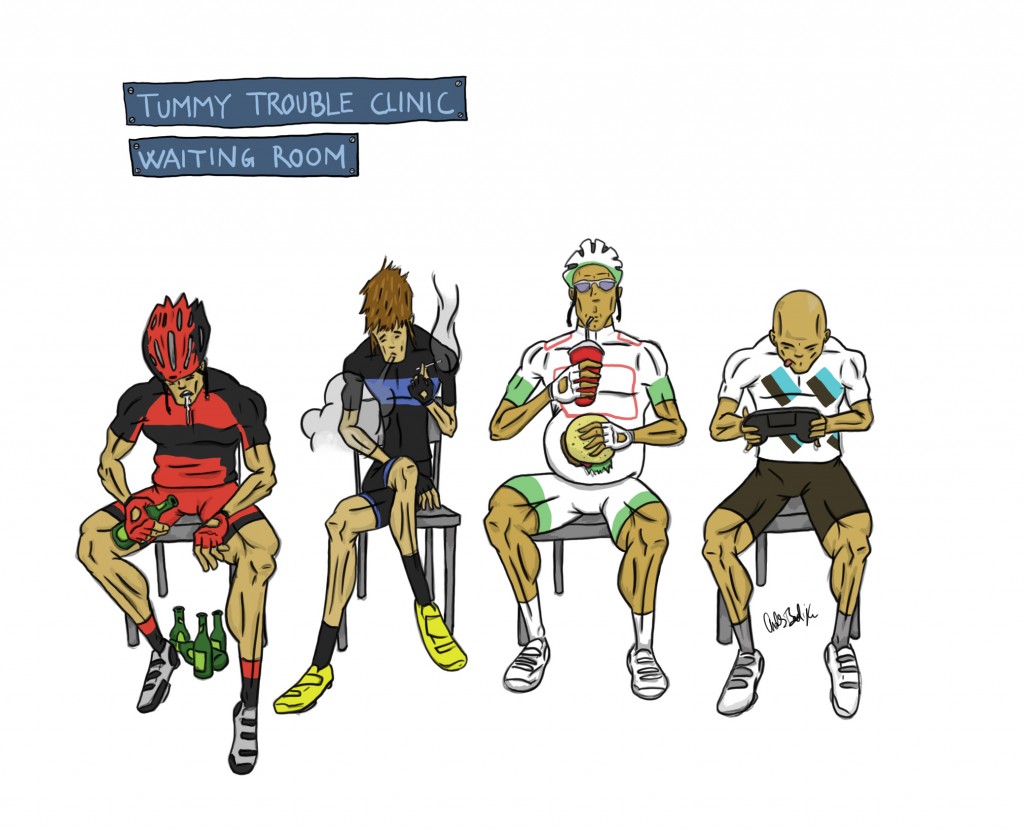 Having Hushovd and Wiggins – two very prominent riders stricken with major sickness – exit races prematurely also draws attention to the amount of illnesses occurring in the peloton. Many pundits have noted these gastro-events seemed to be occurring in mass proportions this year, but upon closer inspection, really aren’t happening with any more frequency than any other year. However, it can be said our sensitivity to these stories is heightened, due to the increase in ulcers and general tummy stress in 2013 brought on by the Armstrong business, the steady stream of confessions reminiscent of a Hague war crimes tribunal investigation and hearing, and the overall reluctance by the UCI to acknowledge just how much shite they are in, metaphorically and literally.

Let’s dive into the morass that is the UCI. Why not? It seems to be my favourite topic, especially in light of what we have accomplished in less than a week with fundraising for Paul Kimmage, and the subsequent media backlash against the UCI. In fact, the gastrointestinal epidemic that was previously sweeping the peloton metaphorically all of these years seems to be shifting upward to the shite flotilla that is the UCI president and former president.

The list of those who are downing the Alka-Seltzer and nervously typing away news pieces and opinion pieces against the bloated and cranky governing body has grown to its own epidemic proportions. Richard Moore. Edward Pickering. Daniel Benson. Rupert Guinness. Lionel J. Birnie. Every major English speaking cycling media outlet has covered or commented in support of Paul Kimmage. As I’ve mentioned publicly in my appearances promoting the Kimmage Fund and privately to many in the sport, Paul seems to be the match to light the fire of discontent against the governing body.

In this respect, 2012 has been a significantly different year over 2011. As you may recall, McQuaid attacked Jens Voigt, threatened WorldTour teams if they didn’t attend Beijing, sent nasty notes over the radio ban, and didn’t authorize any blood testing at several races where they were in charge of anti-doping controls. Yet, the press didn’t really seem to latch onto any of these issues with any great fervour. The media wrung their hands, afraid to say anything against McQuaid or Verbruggen, afraid of a potential “black-listing” which could have a negative impact on advertising/marketing campaigns. Many who stuck their toes in the water of “negative” UCI coverage received an email of rebuke from McQuaid or Verbruggen. Some received phone calls from Carpani. Others received earfuls from management committee members. The status quo was maintained.

However, 2012, began with a bang. Chloe Hosking called McQuaid “a bit of a dick.”

This one simple event began a year of PR disaster after PR disaster for the sport governing body. Hosking was reproached by Australian Cycling and many Aussie pros, male and female, bristled at the attempt by the cycling federation to censor one of their riders who chose to exercise her right to “free speech.” With this first incident, the tone was set. What followed was a cascade of events that caused many inside cycling at all levels and areas to really examine the nervous stomach condition caused by the governing body. Many folks began asking the question, “Why should the UCI be allowed to act in this manner? What really do I have to fear?”

A plethora of journalists were granted extensive interviews with the UCI President during the spring, which exposed his complete lack of depth in managing the sport of cycling. CycleSport. Rouleur. Velo. Procycling. The timing, for McQuaid, was most unfortunate as a 2011 of near misses turned into one of hitting bulls-eyes, as the more he spoke, the more it became evident of the selfish nature of his plans and ideas. One just has to recall my favourite line from the Herbie Sykes interview with him in Rouleur where McQuaid says everything is ultimately “his decision.” In an organisation which has a mission of inclusiveness and equal promotion for all, such arrogance shows just how out of step with the times the top levels of cycling’s management have become.

McQuaid was pressed a little harder on his soundbites. His flip flops. Supporting USADA. Not Supporting USADA. Writing nasty letters to USADA. Giving Hanzhou a WorldTour to only rescind said WorldTour race a few months later.  One just has to recall his horrendous press conference hastily called at the London Olympics, where his comments on the aforementioned USADA action against Armstrong where murky and unintelligible at best, self-serving and protectionist at worst. One quote from a video interview with Sporza was used against him by USADA during the “unconstitutional” fiasco, where Armstrong thought a U.S. federal judge could stall or save him from the USADA investigation.

This past weekend left us with the malaise of McQuaid’s “we have no responsibility in the past” statement, including a MOTION from the UCI management committee, brought forward by my favourite committee member, Mike “Head Up Hein’s Arse” Turtur, whose motion stated they were going to effectively ignore the black era that was the Armstrong mess.  David Millar made his feeling quite well-known on the subject, both in private and publicly. It was the final insult to the sport, piggybacked on the Kimmage announcement only days prior.

Speaking of Kimmage, those nasty tummy troubles didn’t really begin to make a shift from the peloton onto the rest of us until the “rough ride” was revealed. Once it was learnt Kimmage received the Swiss subpoena, it seemed we’d all had enough of the debilitating stomach issues and decided to do something about it. What started as support for a journalist who was unfairly targeted by “the elite” of cycling’s “rulers” became, as Carlton Reid said in his piece on bikebiz.com, a referendum on the UCI itself, where to date over 1,165 people have “voted” with their wallets.

It has become apparent that the discontent with how the sport has been managed has transformed from our own gastrointestinal malaise into a focused campaign to create change. It couldn’t come at a better time, with the Armstrong era being exposed as the fraud it was and the revelation of the extent of that governing body’s role in that fraud. With a pivotal election coming in the UCI in 2013, a grassroots movement for change at the federation level, the professional road-cycling level, and the fan level has begun to grow exponentially. We know this is the case when prominent cycling journalists begin to re-examine their public stance towards the sport’s most talked-about star and its international governing body, and make comments as Rupert Guinness did Thursday in his column:

So in many ways it is about Kimmage, because without his voice and those of a brave minority who dared to speak out, the sport may not be on the cusp of the potential change it faces today. Whether that chance is seized, requires all in the sport to recognise the wrongs committed – me included. But it must also come from up top at the UCI. If not, then those up top must go.

So now what happens? Now what takes place? As Sean Connery said in The Untouchables movie scene I tweeted earlier this week, “… and then what are you prepared to do?” What happens after Kimmage fights his battle against the UCI? What about China? What about Global Cycling Promotion’s drain on the ProTour fund? What about all the conflict of interest? What about all the decisions made that are counter to the UCI constitution?

It’s time for a plan to inflict change.

You owe it to your tummy.

You can find more work from illustrator Anders Bendixen on his website.