The September announcing season got underway today with Mark Cavendish, now formerly of Team Missing Sponsor, calling a press conference to declare where the Manx Missile is to hang his hat, while also announcing the official Manx Missile Tow Car Sponsor for 2012. 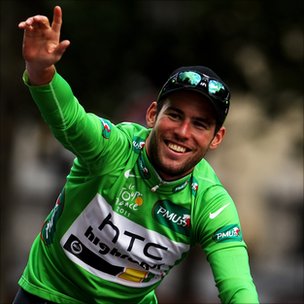 Surrounded by a flock of adoring female fans at the Manx Museum, where his Tour de France green jersey was to be on display starting September 3rd for the few thousand inhabitants of the Isle of Man, Cavendish rode into the village square on the back of his closest friend, David Millar of Team Garmin-Cervélo. The two had been spotted the previous evening canoodling in an F1-themed bar in the West End’s Soho district.

“I have an major announcement to make about my intentions to declare where I might be throwing my hat for 2012 and beyond,” stated Cavendish. “But first I want to put all the rumors to rest that David Millar and I are in a relationship of any sort other than a close, close, close friendship. There is no truth to the gossip that my relationship with Peta Todd is a front. None whatsoever.” Sources close to cycling’s fastest “missile” have divulged to this reporter information to the contrary, however, telling us that the Manxman’s pulchritudinous paramour is merely a cover to allow his Wildean dalliances to be furthered discreetly.

With Millar grinning sheepishly from the sidelines, team managers from Sky, Rabobank, and GreenEdge rolled out onto the elaborate podium set up in front of the Manx Museum, where they were joined by Ian Wilmut and Keith Campbell from the renowned  Roslin Institute.

“We are proud to announce that we have completed the cloning of our first human being, using the prime specimen, Mark Cavendish,” said Wilmut. “The Institute’s geneticists chose Mark because of his phenomenal muscular ability, which is easily replicated due to its protein structure. We were not concerned with the IQ part of the equation, as that has been demonstrated with Dolly the sheep to be a nature vs. nurture situation which will develop depending upon the environment.”

Wilmut went on to explain that in fact three clones had been completed: one each for teams Sky, Rabobank, and GreenEDGE. “Each clone is unique, with the appropriate personality components engineered to fit into the particular team’s chemistry. As this had been something of a problem for Cavendish at HTC, where he had difficulties with a good percentage of his teammates, including such notables as George Hincapie and Andrei Greipel, we thought it best to alter the DNA for future applications.”

When asked about the specifics of the clones’ personalities, Campbell stated, “The Sky clone will be quiet, introspective, and reflective, with only occasional outbursts at the prying media. He will also be a chain smoker. The Rabobank clone will be workmanlike, professional, and somewhat anonymous in the peloton. The GreenEDGE clone will be brash, moody, loud, and volatile.”

Team Sky owner David Brailsford noted “I think separating the elements of Cav’s personalities into three different teams will be of benefit to cycling overall.”

Shayne Bannan of GreenEdge was thrilled just have someone actually sign for his team without denying it first. The loose cannon component was icing on the cake, in his opinion.

There was no comment from Rabobank manager, Erik Breukink, who was seen huddled and whispering on the side of the podium with former Cavendish leadout man Mark Renshaw, another recent acquisition.

The original Mark Cavendish plans on spending the 2012 season driving his car very fast, and drinking his way through the Soho district to find out who he truly is.