Team Sky rider Ian Stannard received some good news as he was preparing for the upcoming Tour of Poland, when he learned he was selected to compete for Great Britain at the Olympics in London. However, Stannard was less than impressed with the composition of the road race team. 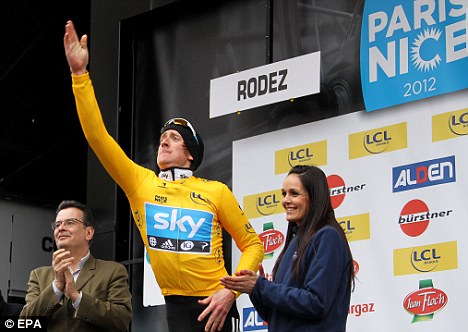 Stannard is concerned about the immigration of Belgians like Wiggins tainting the purity of Team GB cycling team selections. (Source: European Pressphoto Agency)

“Look, they’re great riders and all, but none of them were born in England. I mean, Wiggo is Belgian, Froome is Kenyan, Cav is from some Isle in the middle of the ocean, and that Millar guy is from way up north. What has happened to our cycling programme? We can’t grow our own talent so we have to bring it in from elsewhere? Isn’t this against the spirit of the Olympics?” commented an exasperated Stannard.

Stannard went on to state that the country’s obsession with winning and fame has put the entire nation at risk, especially considering the current political and economic climate.

“It’s complete and utter madness,” fumed Stannard, “How do you think (Jeremy) Hunt, Swifty (Ben Swift), and Burkey (Steven Burke) feel about being displaced by foreigners? It isn’t right I tell you. I don’t care what the odds are for a medal with the transplants. It should be done the right way, or not at all,” concluded the Chelmsford lad.

The selection of the British road team has been mired in controversy ever since Wiggins came out against the inclusion of  Millar for Team GB, creating a shitstorm of immense magnitude, and dividing the British cycling nation in half. Wiggins has made overtures to heal the chasm between the two, and as of late, Millar has “accepted” the overtures.

However, the comments by Stannard highlight the challenges facing David Brailford as he attempts to cobble a team together that features a potpourri of nationalities, competing agendas, and a history of disagreements.

“I really don’t give a shite where they were born. As long as they agree to my agenda, they can ride for me. All five riders are committed to winning, and Cavendish will be on the top step in London where he belongs. I’ve planned this for five years, and nothing will stand in my maniacal ways,” commented Brailsford, despite the fact that he had seven cigarettes simultaneously attached to his lips.

We attempted to reach British pundits for comments, but due to the nature of the news, they were all too busy fawning over Brailsford and unable to comment. However, Phil Liggett did offer his feelings on Team GB.

“I don’t think Armstrong is guilty. It’s an absolute witch hunt. I will be banging this public relations drum every single day on NBC. I don’t care what Joel Felicio says in my ear,” declared an allegedly senile Liggett.