After the mountain of evidence consisting of video depositions, sworn statements, bank records, photographs, and emails was released by USADA simultaneously to the UCI and other concerned agencies as well as the public, long-time Armstrong cheerleader and alleged business partner Paul Sherwen went into hiding. 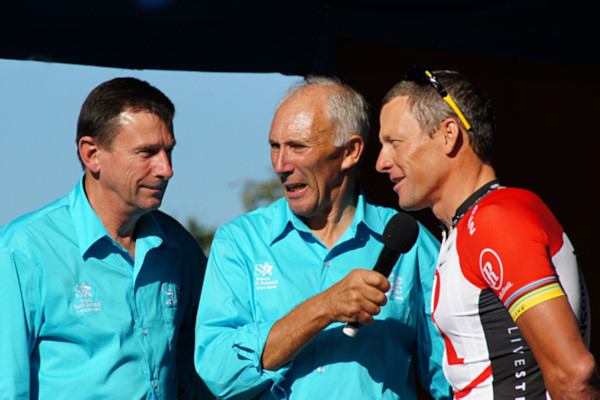 The good old days when Armstrong had everything under control for Sherwen and Liggett (photo via wikipedia.org)

The OLN/Versus/NBCSports commentator issued a few tweets on October 13, stating he was going to spend time digesting the mounting evidence against his “BFF” Armstrong. However, the truth of Sherwen’s activities has been uncovered by special investigators close to “Operation UCI Downfall.” Sherwen has gone into hiding to begin liquidating his ties to the disgraced age-group swimmer.

“We have evidence of Sherwen’s attempts to minimize his exposure in the greatest sporting fraud in recorded human history. In fact, we have obtained proof that Sherwen was actually the ‘anonymous’ sms texter who sent an unsuspecting Phil Liggett to the slaughter in a cyclingnews.com interview earlier today,” commented the investigator who wished to remain anonymous.

The anonymous investigator (apparently French, judging by his accent) went on to recount the tangled web of deceit, and the part Sherwen played.

“We’re concerned that individuals such as Sherwen not only fooled the public with the PR war they waged on behalf of Armstrong, but also that they ran interference for Armstrong with anti-doping officials. We have obtained documentation that shows Sherwen colluded with Armstrong by conducting extensively long, boring, and redundant interviews right after stages, which allowed Armstrong plenty of time to hide his activities. In fact, Sherwen ended up in a shoving match with one AFLD tester when he attempted to corral Armstrong in 2009,” continued the investigator.

It is not known where Sherwen has sequestered himself to perform the liquidation. However, sources at Eurosport UK have confirmed someone had robbed their video vault of the Tour de France races in which Lance participated.

“We can confirm we’ve lost our original footage from Lance’s Tour de France years. We do have a surveillance tape of someone resembling Sherwen, along with someone else who has a prominent chin dimple, accessing the archives on the weekend. Thankfully, over the past few years we’d had the foresight to transfer the archives to our servers in case of theft. As anti-doping agencies around the world have been requesting the footage, we’re glad we had a backup,” commented a Eurosport spokesperson.

When reached for comment on the disappearance of Sherwen, Phil Liggett was befuddled.

“I’m not sure what you’re talking about. Lance was clean. But I also believe Tyler. My goodness me, where’s Paul when I need him? I can’t believe he missed our meeting three days ago. He stood me up for our meeting at a London café. And then I came back to my hotel room, which was in shambles. The hotel staff insists my nephew was in the room and made the mess, but I don’t recall speaking to my nephew in the past week,” stated a very confused Liggett.

Attempts to contact Sherwen via his mobile phone were fruitless, as his number had been disconnected according to the recording.